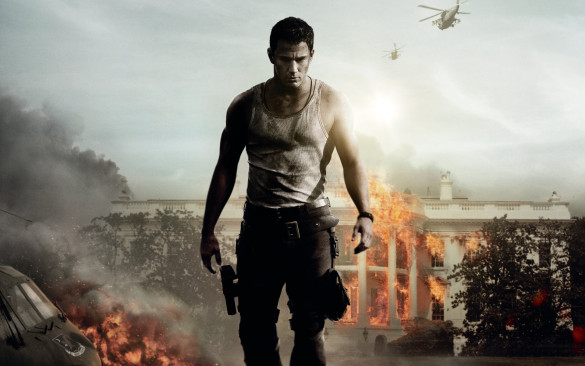 Synopsis: While on a tour of the White House with his young daughter, a Capitol policeman springs into action to save his child and protect the president from a heavily armed group of paramilitary invaders.

DIRECTION
White House Down is pretty much everything you’d expect from a Roland Emmerich film. It has tons of action, explosions, crazy-ridiculous plots but yet it somehow a lot of fun still. The overall premise of taking over the White House is absurd to begin with but with the direction here it’s as plausible as it’s going to get. The execution of the White House being taken over is still overdone but executed much better than Olympus Has Fallen, which is the same premise from earlier in 2013. While the mere amounts of people that are in that building everyday somehow vanished leaving just pathetic guards to shoot down, it’s about as good as you’re going to get. It’s far from perfect and there’s so many questions to be answered but the execution is enough for you to get the basic sense that you can enjoy the take over still. The overall feeling of this movie is somewhat of The Rock but with Channing Tatum running around non-shirtless, which will disappoint half the movie goers who are probably in it for that cause. Speaking of Tatum, what’s also amazing is his super power ability to run away from every bullet shot at him, which is interesting. The visuals in the film aren’t the greatest I’ve seen from Emmerich but again they are better than Olympus Has Fallen and the explosions used here are much more realistic, a term I use very loosely. Emmerich gets good performances out of his actors and it has a nice touch of charm. The movie doesn’t take itself very serious all the time and has lots of comedic elements which are sometimes just really cheesy but also it’s what gives this film a little pizzazz. Part of that is the use of secret (probably not real) White House rooms and tunnels which gives the heroes options to win the day. The White House history used is fun and ridiculous which is what is expected here. The fight sequences are great and you can have fun with them too but they are many which dilutes the third act of the film and makes it feel extremely long. The music for 2/3 of the film is forgettable but Emmerich does make use of it better it the last act. Overall, the movie is fun and has tons of action which is what you’d expect and want from a Summer popcorn film, but it lacks in realism and gets lengthy which brings it down. It’s not Emmerich’s best by any means but far from his worst too.

SCRIPT
Well I don’t know where to begin with the script. The overall premise is absurd on a level I can barely describe but like I said it gets as close as it can. The bad guys have taken over for reasons that can’t be explained without spoilers but the reasoning’s are much more reasonable here and makes a lot of sense as to why they are motivated for doing what they do. That part of the script is actually written well and makes for a descent premise. The dialogue is funny and charming at times, but also gets a little cheesy in some parts as well. But that’s all surface level which makes me ask; what’s really going on here? Channing Tatum’s character is one that is a father striving for love from a daughter who’s been mostly non-existent in his life. He’s working hard and interviewing for a job as a secret service agent when the White House actually goes down and separated from his daughter he meets the President (Jamie Foxx) who is now tasked with saving him while trying to get to his daughter at the same time. It’s an interesting dilemma that was explored mostly well and one that is redeeming and heart warming at the same time. Speaking of his daugher, she’s a central character which adds charm but isn’t pulled off very well. Everything she does is mostly unrealistic and comes across cheesy. The story arc could of been left out but forces certain characters to make decisions about her which makes her a driving force for the movie. Ultimately, she doesn’t belong which is both good and bad. Foxx, who’s life as President has been challenging, wants to earn his right to be called a hero and is probably the first kick-ass President we’ve seen in film. The twists and turns that come with this film are many and not really surprising given how Emmerich explores them but it’s enough to have fun with even though it’s predictable. Another main credit to this film is the level of depth some of these characters go which is unexpected for a Summer action movie. Of course, Tatum’s character is explored more and in the middle of all that we see his main motivtions as I talked about but we also see the same thing with main villain’s character (which I can’t reveal without spoilers) as well as some of the main henchmen as well. The bad guys have back-story’s that could of been left out but that extra five minutes of getting to know them adds to the development overall. It’s not 100% original but it’s unique enough and executed well with depth I didn’t expect giving this grade much higher than I anticipated.

PERFORMANCES
Tatum is pretty good in this role and adds a lot of humor and charm to the film which made it so much more fun than predecessor’s of this theme and premise. He doesn’t take himself entirely too serious which I like in a movie like this and he’s also serious when he needs to be. Jamie Foxx doesn’t quite have the Presidential appeal but his swagger is right for a 20th Century President of the good ole US of A so it’s not terrible. He adds character to his …well character and the morals he exemplifies his what’s most important. Jason Clarke is amazing in this role and he’s an actor that is getting better and better each time he’s on screen. His character isn’t explored enough but when he’s on screen you know it and he brings it. He has enough skill to pull of a fun bad guy and bring life to the fight sequences. He’s one of the better parts of the whole movie. James Woods has an extremely interesting character and he pulls it off but it’s nothing special. The same can be said for Richard Jenkins and Maggie Gyllenhaal as well. The supporting cast takes themselves very serious which is what is needed for characters in this situation, however it doesn’t come off natural and they seem forced. Foxx, Tatum and Clarke stand out here the most and do a descent job; outside of that everyone else is forgettable.

SCORE
Harald Kloser and Thomas Wanker tag teammed this score which is mostly non-memorable. It doesn’t stand out in anyway for most of the movie. The third act of the film gets much better and the action sequences are better for it. While the score doesn’t need to stand out in preparation set pieces, it can still add to the movie overall which it really doesn’t. The one thing Olympus Has Fallen has over White House Down is easily the score.