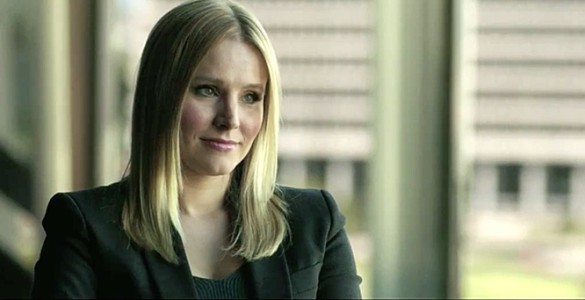 Synopsis: Years after walking away from her past as a teenage private eye, Veronica Mars gets pulled back to her hometown – just in time for her high school reunion – in order to help her old flame Logan Echolls, who’s embroiled in a murder mystery.

INTRO
I must preface that I have not seen the TV show. So, while I’m not a Marshmallow, I’m also not a hater by any means. I’m just an outsider who got a first taste on the franchise during the film.

DIRECTION
Well after a long wait, Rob Thomas and his crew are back as they take Veronica Mars from the small screen to the big one. Fans of the TV show will more than likely fall in back in love right away. The opening is a montage of old clips as Kristen Bell walks us through where they’ve been and what is the latest happenings on everyone. Thomas is trying hard not to exclude non-fans and sets up the story well for the most part. However, if you’re an outsider, you’re always a little distant as it feels mostly like a continuation of sorts, which can be ambiguous at times. Thomas uses lots of inside jokes that fans will surely love though. And let’s be honest, the fans paid for this project, so catering to them was not a bad idea at all. The use of voice-over, silly innuendo’s and mystery made for a great time, which I’ve been assured is just how the show felt. Plus, anytime you can get James Franco can make a cameo putting on skinny jeans, you’re okay in my book.

SCRIPT
Well it’s been ten years since the last time people saw Veronica Mars do anything exciting and since then, she’s mostly just moping around, going to law school and trying to figure out what to do with her life. She’s also dating “Piz”, someone who I’m sure fans of the show will know more about. It’s not long before we find out that her ex-flame, Logan Echolls, is accused of murder and Veronica’s PI addiction comes running back. From there we see Veronica do her thing, leaving a wake of consequences behind her, something she knew would happen. The mystery of this story is solid and compelling as this environment could bring. However, Thomas’ script leaves little room for supporting characters and some sub-plots are left unattended too, which took the air out of them. Veronica’s love arcs, both of them, are not very believable and needed more depth to add any value (maybe the show provided some of that? Help me out fans). The dialogue they create though, is very funny, clever and used perfectly through and through. Thomas does a great job of blending humor with dramatic elements making the mystery very stimulating.

PERFORMANCES
Kristen Bell was fantastic as Veronica, as you could imagine, and really carried the film well. Bell can be hit or miss for me, but she was solid in this role. And she really needed to be as all the other supporting characters are very small and mostly shallow, except for Jason Dohring as Logan and Enrico Colantoni has some great scenes as Veronica’s dad. Again, haven’t seen the show, but did not buy Dohring in his role very much. Perhaps true to character, but from a first glance, he’s dull, subdued and mostly mundane throughout the film. And he’s a murder suspect? Certainly didn’t feel that way. Colantoni added some nice moments as did Chris Lowell as Piz, however his story arc ended abruptly that didn’t feel genuine. Most of the other supporting characters were fine though and did what was needed. James Franco, Justin Long, Dax Shepard and Max Greenfield were a nice surprise cameos that were terrific as well.

SCORE
Josh Kramon, who scored the original TV series, came back as well to give us the music for the film. Usually this is one of my favorite elements of film, however, this score was mostly subdued, boring at times and very generic. The ending sequence and some mystery elements were good but outside of that, it’s very forgettable.

FINAL THOUGHTS
Veronica Mars, from an outside perspective, is a little ambiguous at times and will leave you with some questions to annoy your friends with who do know the show. Some story arcs were not handled well and it’s really just the Kristen Bell show. That being said, this is still a fun movie. The mystery elements were fun and the overall story is pretty good that will leave you engaged throughout the film. It’s obvious they are catering to the fans though, who I’m sure will just have a ball with this film. If you’re a Marshmallow, the inside jokes and jabs at the original show will be fun and to see all these characters come back I’m sure was a treat.