Movie Review: ‘The Night Comes For Us’ is a visual feast of ferocious mayhem 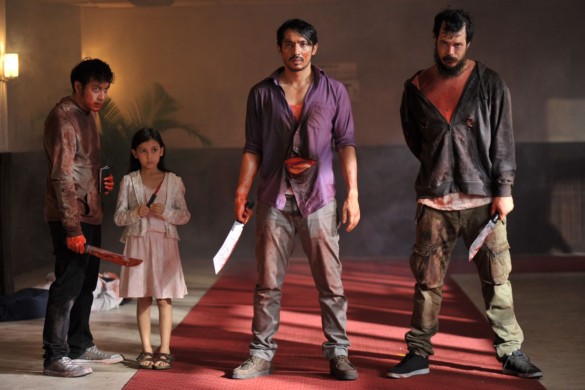 Synopsis: Ito (Joe Taslim), a gangland enforcer, caught amidst a treacherous and violent insurrection within his Triad crime family upon his return home from a stint abroad.

Recently I was seeing post after post on Twitter about a new film from Netflix that was outrageously intense and full of jaw-dropping, action-packed fight choreography. It was made clear over and over again that if you were a fan of the martial arts/action genre it was not a film you wanted to miss out on. After seeing these praises being consistently posted for almost three days straight I decided to sit down and watch it and honestly it was a hell of a ride. Since that first viewing, I have watched it two other times with some friends and family after I highly recommended it as a great popcorn flick. So far not a single person I have watched it with has been disappointed. The film has a simple script with a simple story but is mind-blowing in action and pacing. The film is The Night Comes For Us and now I am recommending it to you.

Let me start off with a warning, The Night Comes For Us is bloody, seriously bloody. This film pulls no punches when it comes to violence and gore. I have been told it is very similar to Gareth Evans’ The Raid but have never seen it so instead if I were making comparisons I would say take Jackie Chan’s Meals on Wheels, Kim Jee-woon’s action thriller I Saw the Devil and the samurai classic Shogun Assassin and throw them all in a blender. The pulpy, bloody result you would get is The Night Comes For Us. Based on a screenplay turned into a graphic novel the film revolves around a group of four old friends, one of which (Joe Taslim as Ito) is promoted to a high-level figure in a criminal organization known as the South East Asian Triad. The film is fuzzy on timelines but he returns sometime later with a little girl, Reina (Asha Kenyeri Bermudez), whom in the process of protecting required he betray the Triad. However, over the passage of time one of the other three, Arian (Iko Uwais), has built his own corner in the underworld and now has close ties to the organization and upon Ito’s return is given direct orders to kill both Ito and Reina. With friends now turned enemies Ito along with the remainder of his old crew, Fatih (Abimana Aryasatya) and Bobby (Zack Lee, with one of the best performances in the film) must protect the girl from Arian as well as the Triad’s massive army. Outside of the four friends, there are some other great casting choices such as Hannah Al Rashid who is excellent as Elena, one of the Triad’s chief enforcers, as well as Julie Estelle, credited simply as “The Operator”, who has amazing screen presence. Both Rashid and Estelle are a delight to watch on-screen and I cannot wait to see more of them, hopefully in future action films.

If you came looking for a solid script and magnificent performances than you are definitely in the wrong place. As I said before The Night Comes for Us is a very simple story that is short on dialogue and what is spoken is fairly succinct and to the point. This is a true action film that keeps things uncomplicated and lets the onscreen energy do all the talking. When it comes to performances they are not terrible but they are far from Oscar caliber. Uwais as an action star is incredible but I found the delivery of some of his lines to be jarring. They seemed off and unconvincing especially when trying to evoke emotion. Taslim as Ito, the character we follow most, gives a fairly decent performance. Oddly his scenes which I found most difficult to watch actually have no audio dialogue. There are two times with Ito where the film cuts out the verbal audio and simply lays a score over while the scene plays out. Both scenes are very dramatic with Ito wailing and jerking about in an erratic way. My assumption is that the director, Timo Tjahjanto, wanted to focus mainly on the action and was trying to move the story along without having to linger too long on emotional drama, which can be effective if done properly, but Taslim’s performance in both scenes just didn’t seem to fit and felt overacted. Outside of this and few other pauses in the story he spends most of the film walking around with a grimace on his face and breaking the legs, arms and backs of anyone who gets in his way all of which is done in spectacular fashion. No complaints there.

The Night Comes For Us is pure entertainment. As sketchy as the storyline is, and as clumsy as the script can be, it delivers in ways that made me look past all these flaws enough to watch it multiple times. And honestly I am looking forward to more films in this genre, it has been too long since a director has put together a film like this and I can’t wait to see what we get next. The pacing is great and Tjahjanto does some very clever things with scene transitions as we bounce back and forth between different parts of the story. There a few lulls, which in a film like this can really stand out and have you screaming to just get back to the mayhem. This is especially true in the first act as it takes time for the action to kick in so give it a minute to allow the film to build the story and characters. Just brace yourself because if action and chaos are what you were looking for, you are in for a treat. The Night Comes For Us is a dynamite two hours and for those of us missing the action films of old, it’s a breath of fresh air.