Featured: ‘The Art of Self-Defense’ is a biting satire on masculinity 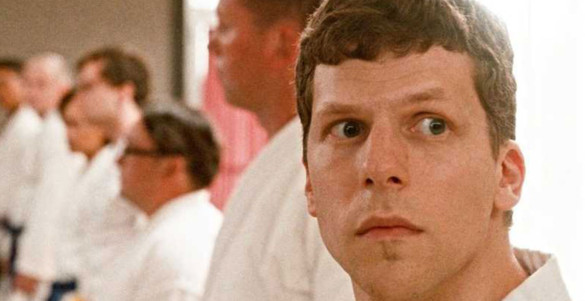 Riley Stearns’s dark comedy The Art of Self-Defense offers insight into the toxic masculinity that permeates our culture in 2019 but does so in a way that forces the audience to look deep inside themselves in order to understand how quickly toxicity can be coaxed out. The Art of Self-Defense slowly and methodically draws the viewer into a world where rules exist for a reason, and those rules are to be followed with respect or consequences will be felt. The filmic world Stearns creates exists as a mirror onto our society, putting the onus on us to recognize the dangers of our behavior, to understand who makes the rules, and to whom those rules apply.

Casey (Jesse Eisenberg) is a meek and passive man who lives a dull and insignificant life. His days consist of work as an accountant and his nights of boring companionship with his tiny Dachshund.  One night he is viciously attacked by a rabble of faceless muggers, thus pulling his meek and passive nature into the limelight.  After his assault, Casey lives in constant fear and seeks out defense. After a trip to a gun shop, in which Casey learns the dangers of owning a firearm, Casey then turns his attention to a local karate dojo.  On the surface the dojo seems like a legitimate venue to learn self-defense and boost his confidence. However, upon further inspection the sensei of the dojo (Alessandro Nivola) operates his center of karate learning with immovable rules, a strict hierarchy, and a rigid sense of masculinity.  As Casey sets off down his path, he veers wildly out of control as the Sensei’s rules and codes push him to the brink, forcing Casey to make a choice about salvaging his masculinity as well as his life.

Several themes are at play in The Art of Self-Defense. One major theme is the perils of toxic masculinity.  Casey’s weak nature and failure to defend himself aligns perfectly with the rules Sensei has put forth.  His rules, which are literal and adorn the wall of his dojo, consist of benign mandates such as: 1. No shoes on the mat, 2. No food or drinks on the mat, 6. Respect your opponent. However, other rules, such as number 11 (which was added later); Guns are for the weak, seem like commands that overextend and impugn. Here lies the world in which the film unfolds. Masculinity exists in the dojo as something to be respected and attained. All the students of the dojo, including its only female pupil, Anna (Imogen Poots), strive to meet the ideals Sensei puts forth. Even in the “night class,” which is little more than a fight club, brutality is rewarded and revered. After Casey is rapidly promoted to yellow belt, Sensei tells him some small changes to make to draw out his masculinity. Listening to metal music, learning Russian or German instead of French, and ditching his Dachshund in favor of a German Shepherd all top his list of alternatives which will make Casey more manly. The rules Sensei posits are manifestations of his own insecurities and are therefore unrealistic outside of the dojo.  Once Casey understands this, then he is allowed to extract himself from the world that Sensei has created and push back against the toxicity that Sensei and his hyper-masculine fight club maintain. By using his rules against him, Casey can escape Sensei’s grip and return order to the dojo and his life.

The Art of Self-Defense is an extremely dark comedy. Its mood switches wildly based on the situations in which Casey finds himself.  As the stakes get pushed higher, the ridiculous becomes the norm. Often goofy and monotone, The Art of Self-Defense questions how easy it is to have toxicity bubble up to the surface.  The brooding nature of Sensei is felt throughout the film, even as Casey gives in to the dangers of the dojo. The absurd is on full display as characters seem transfixed on pleasing Sensei. As a whole, The Art of Self-Defense is extremely entertaining and the performances of Eisenberg and Nivola make for a pleasurable back and forth. Eisenberg’s Casey is low-key and awkward, using very little dialogue. Likewise, Nivola’s Sensei is stoic and wise, with slight pangs of anger hiding under the surface. The subtleties are where this film thrives. Oftentimes, the film falters as it adheres to its own rules, but those flaws are overshadowed by the methodical approach to minimalistic direction and dialogue. The matter of fact conversations and flat colors form a world of order and timelessness that lull the audience into a belief in what the Sensei is trying to interject. However, once that top layer is peeled back, one begins to see the deadly nature of the dojo and how the cultish Sensei deals in violence, aggressiveness, and hypermasculinity.