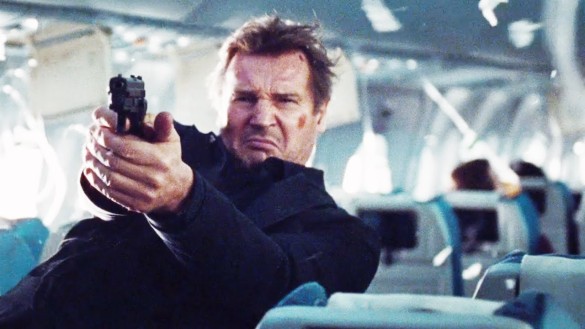 Synopsis: An air marshal springs into action during a transatlantic flight after receiving a series of text messages that put his fellow passengers at risk unless the airline transfers $150 million into an off-shore account.

DIRECTION
Director Jaume Collet-Serra was very close to pulling of a great airplane thriller but choked with the ball in his hands in the final minutes. The first two acts of the film are pretty good, despite being a little formulaic. Collet-Serra slows the pace down in the first 10 minutes to let us explore who Liam Neeson’s character is and what may be going on. The camera sticks close to Neeson and there are several foreshadowed moments, that is pretty clear will come into play later. The story is well-paced and Collet-Serra was pretty good at bringing us a good thriller at 35,000 feet. He uses some interesting touches for reading text messages and some clever uses of camera transitions as well. The first two acts were not bad at all. However, the third act arrives. It’s at this point Collet-Serra loses focus, rushes things and wasn’t clear on where he wanted to go. The script was an interesting turn but it’s the execution that really falls flat. Perhaps the main villains are miscast but you don’t believe what is happening and some of the effects in those action sequences are not very good. And the final few minutes are not clear in some of the details surrounding Neeson, leaving the viewer very confused. Overall, a great swing but just couldn’t quite get the homerun but still a good double.

SCRIPT
This is John W. Richardson’s first feature length movie script and I gotta say, it’s not terrible for a newbie. The biggest issue with this script is that it’s pretty formulaic in some ways. We have a hero who gets everything pinned against him although it’s not his fault but in the end..well you can guess where it goes. The story surrounds Bill Marks (Neeson) who is an alcoholic after some terrible circumstances in his life but now he is an air marshall getting ready to board a flight to London. Once in the air, he receives threat messages on his phone that leave him needing to find answers to save the plan. It’s at this point things start to go south for Marks but the the story moves well leaving you with a few ideas who the real bad guy may be. The big turn into this movie is not just the main premise of an air marshal being hijacked on a plane but the 9-11 theme that ends up being the big picture. It was an interesting idea that just was well executed in the end, however it’s more of a direction error than a script error and for that I give the writers some credit. The biggest knock on the writers is the characters. Outside of Neeson, the rest of the characters aren’t that interesting and while many are there to throw you off, there’s not much to really garner any real attention.

PERFORMANCES
Liam Neeson does a really good job of being Liam Neeson and he carries this movie well. His character is has a backstory we’ve seen before but its’ interesting to see in played out through an air marshal in this particular situation. However, the rest of the cast is absolutely wasted. Good God why is Lupita Nyong’o in this movie!? What an absolute waste of an extreme talent. She doesn’t even have lines of dialouge in this film, which was very disappointing. Julianne Moore is another supporting character who doesn’t have much to do but she does a good job of making you think what the director wants. Michelle Dockery has some intereting moments as well and she’s fine in the role, but again, with not much to do. The “villains” are more interesting as text messages and the other supporting characters add almost nothing that’s crucial to the story.

SCORE
John Ottman is a composer that has some scores that I really like, however this isn’t one of them. For a thriller movie like this, the score can almost work as a character itself if done right but here it’s mostly just bland and doesn’t add that much excitement. There are some moments it worked but you won’t really notice anything in the end.

FINAL THOUGHTS
Overall, Non-Stop wasn’t completely terrible. It had some elements going for it that worked really well. Liam Neeson’s character had some descent backstory and the turn it takes on 9/11 is actually an interesting concept. It explores some stereotypes and kind of flips it on it’s head a little bit, however the execution of that idea was just really poor. The “bad guys” aren’t that interesting once revealed and some of the end elements just make zero sense. And I’m personally offended that you cast Nyong’o here and don’t give your any real lines of dialogue. That’s ridiculous. All in all though, while the film will ultimately be forgettable, it’s also not a complete waste of time.