Movie Review: ‘Earthquake Bird’ is a scrumptious and static flight 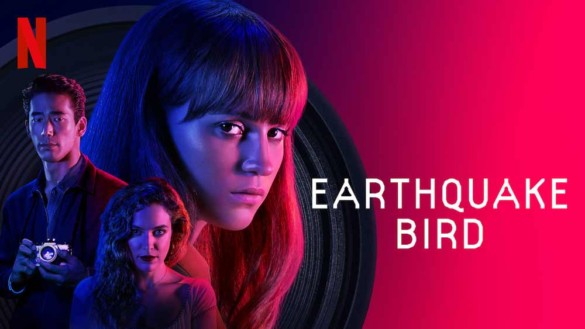 Synopsis: An enigmatic translator with a dark past is brought in for questioning after an ex-pat friend, who came between her and her photographer boyfriend, ends up missing and presumed dead.

Going off of Netflix’s descriptions alone, the level of danger in the adaptation of Susanna Jones novel seems supernaturally high. But don’t worry if you’re not in the mood for horror; the subject matter here is strictly on a love triangle in 1989 Japan that ends up with a girl gone (the pulsing score from Atticus and Leopold Ross & Claudia Sarne will remind you) and not a yūrei out for souls. Still, there remains a dilemma: The danger suggested? It’s mostly absent, the result of a direction that lets passivity prevails. And for something classifiable as a psychosexual whodunnit, this is the gust that tailspins the bird.

There are a few things that Wash Westmoreland does right. On the character front, the writer-director understands what is the factor that makes his three main players an irresistible mystery to each other and all others — as an expat and working translator, Lucy Fly (Alicia Vikander) is able to access any conversation; as a newcomer, Lily Bridges (Riley Keough, fleeting but impactful) can play up her gaijin traits to reach her goals; as a local, Teiji (Naoki Kobayashi, fittingly sultry) knows how to have the subjects caught in his lens reveal everything willingly — and play them up at the right moments. On the drama front — with all that in mind — Lucy, Lily and Teiji are each rendered as a weapon you can’t see coming; it almost becomes a game to pinpoint where they have fused a dose of deception into a particular interaction. That said, Westmoreland keeps an exclusive access to these interpretations, allowing us to deem the overall mood as sedated instead of somber. There needn’t be (and Westmoreland is wise to do this) any sort of in-your-face fireworks to realize the narrative’s psychological tendrils, but if the job to do so is dependent on the performers — all of which are game — there should have been something from them that will jolt, surprise, upset, subvert, and the like. A slightly out-of-place movement. A subtle glance. A micro-reaction that makes their souls vulnerable. Anything to suggest depth, something else but the current “what you see is what you get”-ness, which at times would reach its peak via a summary line from either Lucy’s also-expat friend Bob (Jack Huston in a throwaway role) or the older detective Kameyama (Kazuhiro Muroyama) who’s questioning her about Lily’s disappearance.

Since there is a failure to fully join the players in the love triangle, the only guaranteed source of enjoyment left is to step back and observe the shape. Visually, Earthquake Bird is a hoot, as expected when Ridley Scott is listed as a producer or because photography is a central plot element. Be it a shot the tourism board would love to obtain or something in tighter quarters, Chung Chung-hoon’s lensing greatly enlivens the space with angles or colors showing both Japan’s inimitable gorgeousness and how that can be a means to shield impulses best left unspoken. The sights along with the performances (especially Vikander’s, which is a canny rendition of someone with a hunger for recognition) are why the film stays intriguing despite nothing is happening when we’re constantly yearning for something or when something is happening but it’s too muted to discern.

Makes it all the more ironic for a film bearing a title about unstable grounds and the noises that follow. If the frames are converted into data for a seismograph to read, be ready to see mainly flat lines.