Movie Review: Nerves and unease spark the unseen horrors of ‘A Quiet Place’ 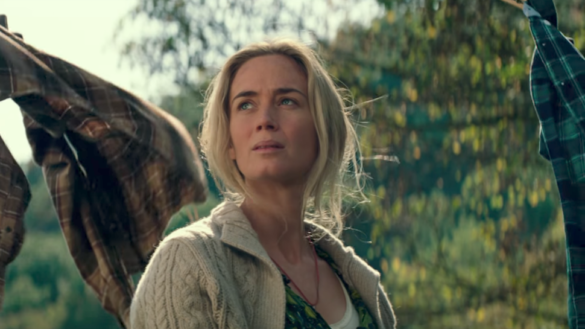 Synopsis: A family of four must navigate their lives in silence after mysterious creatures that hunt by sound threaten their survival.

Silence. Virtually every human or every living creature has been drowned in the properties of silence at a certain period in their life. How could someone adapt to having to live in silence for the rest of a lifetime? How would a family? John Krasinski, not only questions viewers with these, but examines the unifying significance of grief that a family faces in the middle of already ongoing tragedy. Such tragedy that rests as the vigor for the films innate drive. Krasinski truly does deserve to be the recipient of such needed acclaim. While this isn’t profound enough to be a revolutionary marvel, it wouldn’t be the same if he wasn’t attached.

As much as I feared that the majority of the films lurking sense of doom was to be flagrantly ignited by constant jump scares—while admittedly there are a handful of them—Krasinski is no greenhorn in this situation. He maintains the foreboding thriller-ish roots he’s set out before him and doesn’t abandon that when shall I say, things hit the fan. He coaxes in the audience with a secondary struggle between a family at large, which isn’t as formulaic as it may seem due to its cogency toward the narrative and eventual finale. The palpable undercurrent of tension in the midst of this restrained shelter of confinement throughout the films aura of terror is constantly stacked upon each forthcoming pillar, being just as heart-pounding, palm-sweating, nail-biting as one can expect. Who knew Jim from The Office could build such authentic tension?

Despite the scarcity of any supporting characters, this family contains enough development and arcs to sustain the gaping holes of any other contradicting personas or argumentative standpoints from non-existing characters. Therefore since most of the movie is in sign language, every actor/actress is nuanced enough to the point where there’s no one trying to outperform each other. Millicent Simmonds’ character is surely the most intriguing however, just because of how sublime of an actress she is and how fundamental is she is to the narrative. It does become quite difficult to be completely on board with everything they’ve prepared for us however. As even in sign language some of the script that’s being performed tends to get quite tacky between authenticating the families bond. Attempting to show the strength they have and the unity that brings them together after a certain event, but its vision is just too dense and blurred to construct. The majority of it all is pure exposition anyway, so it surely doesn’t benefit our characters and general focus.

Even within the opening prologue of the film, we’re fed a spoonful of the apprehensive events that are sure to tag along to the rest of the production. There are instances in the middle of these wretched events that mirror the presence of claustrophobia yet exhibit the soundless, scathing pain are characters have to remain in even in the most horrific of monstrosities. And for a film revolving entirely upon the necessity of surviving parallel to the companionship of silence, sound is one of the most affluent ingredients towards A Quiet Place’s continuously striving dominance. Once the rising action has its first true stepping stone in the direction of the climax, the sound mixing and editing take hold of the wheel. Furiously agitating the rapidity of chest-pounding heart beats and sharp adrenaline rushes. It makes the mild level of gore unbearable due to maniacal threat and panic at hand.

While there isn’t any startling twist nor some unexpected revealing detail, this film flourishes in its own personal small accomplishments and successes. This fortunately, discloses everything for a polished transition to a new scene or sequence. Even in the face of doubt or fatality, I adore how there’s always something new to build upon. The film is persistent in throwing curveballs at you and Krasinski is constantly strangling the audience with unfortunate predicaments, one after another. Some more exhausting than others of course, yet all equally draining. The full progression of it all relies solely around based pessimism and angst but doesn’t tarnish the basic evolution of the film, demonstrating that even in such dire circumstances there’s still affection and knowledge to be processed and learned.

As much as a factor of the element of seclusion and the always abrupt setpieces are, there’s this subconscious niche that feels a bit slovenly knitted together in relation to how the film actually comes to be. The whole “if they can hear you, they can hunt you” ploy and the brusque nature of these creatures is a correlation to the uncertainty of their incursion, yet it doesn’t completely seal away all of the films doubt about whether this tale is sentient enough to remain striving. Excluding the opening, it struggles quite extensively to be something more than just an ambition. The beginning commences a riveting segue into the meat of the film but also supplies a skittish execution with the level of momentum and urgency they have until something truly of worth happens. All of that is ultimately made up though due to the extremely unsettling conclusion. By the end, there’s hardly anyone else to put hope in to because of how the audience and characters have accepted what feels like a finality at this point. Also because a certain character fate in particular breaks every single emotion you might’ve had left. Most impressingly, all of it feels perfectly warranted and it actually knows the path it desires to take after that event has transpired.

It brings me pleasure in that I’m able to say, A Quiet Place is indeed, great. While it does wear on some of its characters with certain plot decisions and narrative dissonance, I admire the impetuous suspense that stays mostly consistent throughout the entirety of the runtime. And plus, it’s got a killer ending. I know I’ll never forget that finale accompanied by the screams that lingered all throughout the auditorium. It’s a definitive crowd-pleasing, must-see.