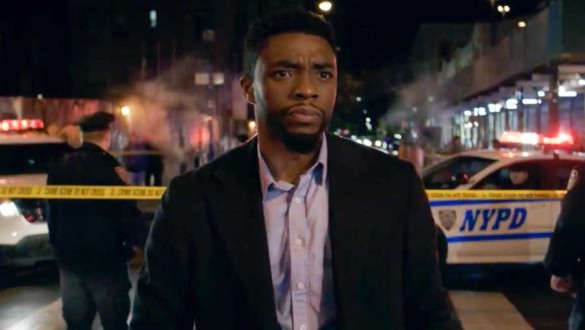 Synopsis: An embattled NYPD detective is thrust into a citywide manhunt for a pair of cop killers after uncovering a massive and unexpected conspiracy.

There are films that you may not be super excited to see but do want to watch purely to turn your brain off for a few hours maybe after a rough day or a long work week. 21 Bridges is one of those films and I knew this even before purchasing my ticket. With a decent cast led by Chadwick Boseman and a so-so trailer I completely understood what I was getting myself into and honestly some times a film like this is exactly what you need. Nothing heavy just an easy to follow plot, some proper action and suspense, and some fair acting. That’s what you can expect from director Brian Kirk’s sophomore theatrical release. His resume mainly consists of directing episodes for some television series such as Game of Thrones and Dexter and also Hard Sun, a short-lived series on Hulu that I actually enjoyed. For his second swing at theaters, he made a decent hit.

The film centers around Detective Andre Davis, played by Boseman, and his investigation of a drug heist gone wrong. It is fairly obvious, for the audience at least, to make some connections early on and see the road the story is heading down. The film is full of corruption, moral ambiguity and a cop that has a reputation for skirting the edge of upholding the law and adhering to the law. It is all stuff you can find in any detective drama or thriller which makes for easy viewing, there are really no surprises here. For some, this might make for a boring film but I enjoyed it. We too often have films that spend so much energy trying to be clever that they end up being both unnecessarily long and unnecessarily twisty. This film is neither and with great pacing especially for this genre of film. It does slow at some points but not for too long. Additionally, the action is good both in quality and quantity. The meat of the film is not in the action but in the suspense; following the story and watching it unravel. 21 Bridges is good storytelling with a few turns but an overall steady ride.

One thing that does surprise me about 21 Bridges is Boseman’s performance. I absolutely love him as Black Panther‘s T’Challa, he brings a certain style and dignity to the character, but his role as Andre Davis just felt flat at times. There is a lack of depth to Davis and there are moments where I am not sure I understand what he is feeling. This may also have to do with the writing; we are offered some hints to Davis’s past, which seems pivotal to understanding his character, but the story never really elaborates on it. It isn’t a bad performance but definitely not one I was expecting from such a seasoned actor, especially from one with such a great performance already under their belt. That being said I do very much enjoy Stephen James’s portrayal as Michael, one of the criminals involved in the heist. I looked him up after watching the film and was happy to learn he stars in ‘If Beale Street Could Talk’, a film I am very sad to admit I have not watched yet but, after seeing him in 21 Bridges, I am much more excited for. Unlike Davis, James gives Michael a lot of depth, so much so that Michael is the character I feel the most empathy for and connect with…and he is a criminal. This is also without knowing much of Michael’s past, what we are provided comes late in the film and if anything reinforces the depiction that James has illustrated so excellently.

You won’t leave the theater with lots to discuss with 21 Bridges but you will leave satisfied. It is a solid film that is doing just enough to keep the audience happily entertained. For lovers of detective thrillers, it won’t disappoint and is worth the price of admission. I hesitate to make this comparison but at times the film reminded me of 2008’s Street Kings directed by David Ayer. Street Kings has an edgier feel and is more loose with the violence, but it has similarities including its pacing and their lead characters. Both Andre Davis and Keanu Reeves’s Detective Tom Ludlow seem to have a similar set of principles. 21 Bridges is a simple crowd-pleaser, it won’t be landing in many people’s Top 10 for 2019 but it will satisfy that quick craving for good cinema.