Movie Review: Trance sends you into amazing world of illusion 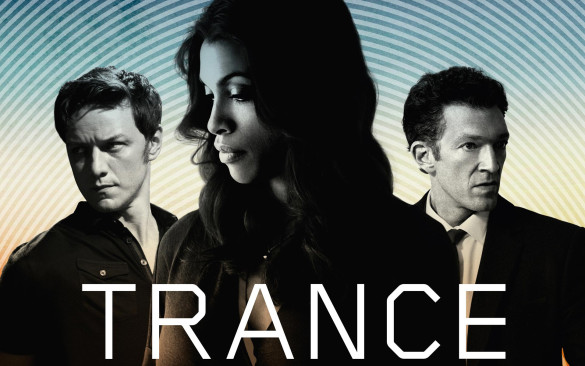 Synopsis: An art auctioneer who has become mixed up with a group of criminals partners with a hypnotherapist in order to recover a lost painting.

DIRECTION
I usually love Danny Boyle as a director and Trance falls into that, “I enjoyed this, but never need to see it again” category. The big reason for that is mostly because of the script though. Trance tries to fall into the Inception, mind-busting, plot-turning kind of film, but it doesn’t quite hold up to that kind of level. The biggest win Boyle has with this film is making you fall into the world of trance he is trying to create. The hypnosis, word-bending shots and cinematography is amazing. He uses a lot of bright vibrant colors and creates an environment that captures you into his world. A lot of the time I wasn’t sure if I was in a trance or if it was real world. Considering the script (which is what brings this down for Boyle), I think Boyle does a good job of keeping you confused and lost, while engaging you with his interesting characters. And his visual style I loved. The performances and the score were also done really well.

SCRIPT
I have a love/hate relationship with this script. The characters are very interesting to me. I love Rosario Dawson and James McVoy’s characters as they are looking for something very specific. McVoy is confused and trying to figure out who he is, which up until the end you’re not really sure. Dawson on the other hand is fighting for who she is after a tragic circumstance and her craft is very manipulative. The dialouge with Dawsons character is amazing and Boyle does a great job of using it to provoke certain emotions. I love how, in the middle of crazy circumstance, their stories are intertwined which keeps the story in a vibrant spot. That being said, it rely’s heavily on coincidences and the ending ruins the first hour and half. When the script starts bring itself together, it more or less loses itself and the story could of just been told in 20 minutes. Where Inception has it’s twists and turn, it leaves you with an understanding of where the character is while leaving it open ended, which worked great. Not that Trance had to have the same ending, I feel like the story took way too much time to get to what was really a set of circumstances that were manipulated.

PERFORMANCES
I thought the performances were pretty good and I was really drawn in to Dawson’s character, Elizabeth. Her words and actions really put you on the couch sort of speak and I felt like I was in the world of Trance with her character. James McAvoy was good too but I didn’t really care for his character much. I think he does a great job of making you feel like you’re on his side though. Vincent Cassel does a great also and the tables turn on his character is some ways that are pretty unconventional. The other supporting cast is pretty average for the most part. Dawson stands out the most to me here though and it doesn’t hurt that I love her character the most.

SCORE
Rick Smith’s score is amazing. It’s got a strong, underground dance vibe which is very fitting to the movie. It’s electronic in nature with some serious tones where appropriate. The final 20 minutes of the film is easily the best part though. It ramps up so appropriately and is so engaging. It’s a fun listen to outside of the film and is one of my favorites so far in 2013.