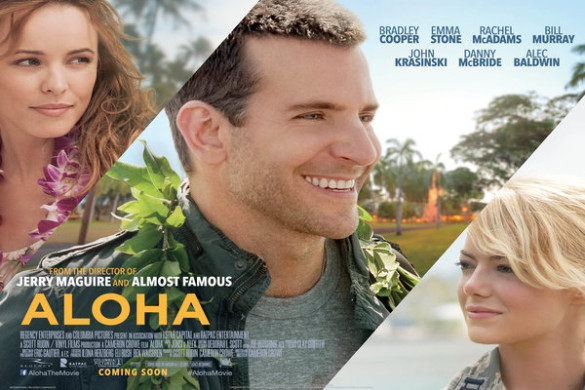 Aloha, featuring an all-star cast, is about a celebrated military contractor who returns to the site of his greatest career triumphs and reconnects with a long-ago love, while unexpectedly falling for the hard-charging Air Force watch-dog assigned to him.

We’ve all experienced something similar; love unrequited. Maybe you’ve even experienced a love triangle similar to the one in Aloha. It can surely be said that love triangles exist in the slew of romantic movies out there, today.

Here’s the top 10 list of movie love triangles. Grab the ice cream and tissue, it’s going to get emotional.

At a turning point in his life, a former tennis pro falls for a femme-fatal type who happens to be dating his friend and soon-to-be brother-in-law.

Honestly, who wouldn’t want to be in a love triangle with ScarJo?

Pearl Harbor follows the story of two best friends, Rafe and Danny, and their love lives, as they go off to join the war.

Admittedly, one of the most oddly placed love triangles. It might have seemed super inappropriate in the film, but what love triangle isn’t?

A playboy becomes interested in the daughter of his family’s chauffeur. But it’s his more serious brother who would be the better man for her.

One of a few older movies on the list. Proof that love triangles have existed for decades.

Holden and Banky are comic book artists. Everything’s going good for them until they meet Alyssa, also a comic book artist. Holden falls for her, but his hopes are crushed when he finds out she’s gay.

In true 90s fashion, the definition of a love triangle is altered.

Set in unoccupied Africa during the early days of World War II: An American expatriate meets a former lover, with unforeseen complications.

One of the oldest love triangle movies I can remember. Here’s looking at you, kid.

When a woman’s long-time friend says he’s engaged, she realizes she loves him herself… and sets out to get him, with only days before the wedding.

The hardest love triangle to face; one bound with an engagement.

When a rich woman’s ex-husband and a tabloid-type reporter turn up just before her planned remarriage, she begins to learn the truth about herself.

One of the few film love triangles that have a happy ending.

Generation X Graduates face life after college with a filmmaker looking for work and love in Houston.

This movie really defined an entire generation. Everyone picked a side.

A poor girl must choose between the affections of her doting childhood sweetheart and a rich but sensitive playboy.

A movie that started the “friend zone” trend, in typical 80s style.

1) Gone with the Wind

A manipulative Southern belle carries on a turbulent affair with a blockade runner during the American Civil War.

A classic before all classics. Even during a turbulent time, love triangles persist.