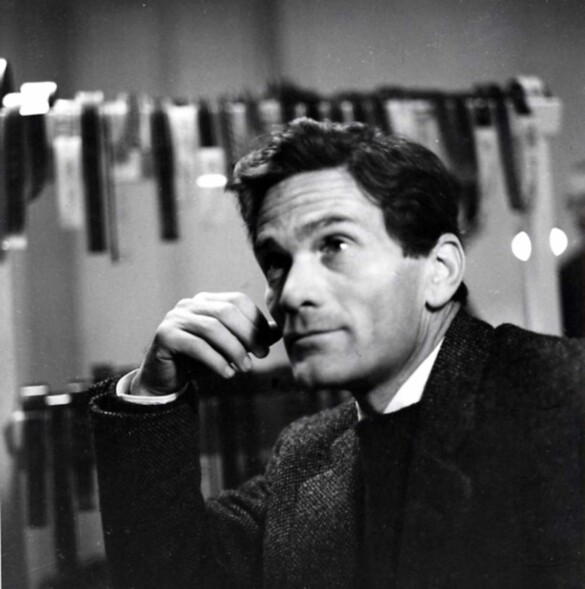 On March 5th of this year, Pier Paolo Pasolini would have been a centenarian. In the history of Italian cinema, Pasolini is in a whole category of his own with various works of critical satire of modern Italy with its consumerism and cultural alienation. He was a devout communist who was not shy of expressing sexual hypocrisy in a masculine society, as he was a openly gay man. Pasolini wrote extensively on these subjects in magazines, literature, theater, and in cinema, which he would embark on in 1961 when he was 39 years old. It ended abruptly and violently with his murder in 1975.

Pasolini was born in Bologna, but moved around because of his father working for the Italian Army in his youth. From his youth, he became engaged in literature and was influenced by the writings of Fyodor Dostoevsky, Leo Tolstoy, and William Shakespeare, which allowed him to join circles of discussion with other classmates. He also considered himself an atheist at this time and, while Italy was fighting in World War II, aligned himself with the communist partisans from within. At the end of the war, Pasolini published his first book of poems.

Moving to Rome in 1950, Pasolini and his mother lived in a rundown area called Rebibbia and lived by its prison. Amongst the immigrants and refugees in Rome in poor conditions, it resolved Pasolini’s view that the country’s turn to capitalism was wrong and he began to speak out against it. It was also when he got in trouble with the law on indecency charges (because of his homosexuality) which resulted him in being expelled from the Italian Communist Party local chapter. Uncompromising and unapologetic, Pasolini made a living selling his own books on the street and got a job at Cinecitta film studios, where he met Federico Fellini.

He published his first novel, Boys of Life (it has since been republished under the title The Street Kids), in 1955. Upon its release, it was under massive scrutiny by the press and politicians, namely by the conservative Christian Democrats, for its portrayal of male hustlers. Fellini was unfazed by the criticism and hired Pasolini to polish dialogue in his films Nights of Cabiria and La Dolce Vita. This helped Pasolini make his first film, Accattone, a post-realism drama about a male hustler surviving the streets trying to get by anyway he can. His grim portrayal of another side of Italy once again angered politicians who demanded more censorship of films that were seen as offensive to Italy and the Catholic Church.

Counter To The Counterculture

From Accattone, Pasolini made two of his more accessible films; Mamma Roma, starring Anna Magnani and Franco Citti, and The Gospel According To St. Matthew, a neo-realism story of Jesus Christ. Despite his atheism, Pasolini still held some fondness for the Catholic Church and dedicated the film to the late Pope John XXIII. It received critical acclaim and the film was later named the best film about Jesus Christ in 2015 by the Vatican City paper L’Osservatore Romano.

He followed it with his adaptation of the Greek play Oedipus Rex, then the allegorical anti-bourgeoise film Teorema starring Terrence Stamp, and ending the 1960s with another Greek tragedy adaption, Medea, which featured opera singer Maria Callas in her only film role.

His political activity also grew with the student movement of 1968 happening around the world and violence between them and local authorities over various issues. However, Pasolini was an untraditional Marxist in his beliefs that the police were not the enemy, but also the victims of a corrupt system. While left-wing figures supported the decriminalization of abortion, Pasolini actually opposed it. He also accused the Christian Democrats for being the new fascism and alleged them to be behind mafia-associated killings with protection by the CIA, and called for television to be illegal in the country because Pasolini saw it as the cause of the cultural gap between Northern and Southern Italy.

In the 1970s, Pasolini decided to focus his next movies on literature classics that were centered around the sexual freedom growing in the decade. This would labeled as his “Trilogy of Life,” all three movies with plenty of nudity and slapstick comedy with both heterosexual and homosexual tones. Sodomy is a sin, yet the real sin is being in poverty while the powerful engage in their sexual fantasies in Boccaccio’s The Decameron, Chaucer’s The Canterbury Tales, and the erotically-charged Arabian Nights. The films were wildly popular and Pasolini was given more respect for his artistic mastery. This trio of films, plus his final movie Salo, were produced by Alberto Grimaldi, shot by Tonino Delli Colli (who also worked on Accattone and St. Matthew), and scored by Ennio Morricone.

His unexpectedly final picture was also his most notorious and the probable reason for his murder. Adapting the notorious story by Marquis de Sade, Salo, Or The 120 Days of Sodom moved the setting to the last months of World War II in the far north of Italy where Benito Mussolini is the puppet head of Hitler’s occupied section of the country. Four wealthy libertines, aware that they are short on time, decide to celebrate their demise by kidnapping a group of teenage boys and girls and force them to engage in humiliating, degrading activities. It is Pasolini’s most anti-fascist film and a reflection of the modern Italian society he saw in decline.

The sadistic violence – rape, sodomy, torture, roleplay, coprophilia, voyeurism, and murder – is as graphic as one can get with its depictions. It has several stomach-churning moments in which, instead of the softcore feel to his “Trilogy of Life” films people found before, Pasolini made Salo the anti-porn film even with the nudity and strong sexual content. While filming, some of the footage was stolen; Pasolini was sent a ransom note to get it back and went to a secret location outside Rome. On November 2, 1975, Pier Paolo Pasolini was murdered having been run over by his own car, bludgeoned, and partially burned. He was 53 years old.

His murder remains considerably debatable and is now considered unsolved. Officially, a teenage prostitute was convicted for the murder, but years later said he was forced to confess the murder because of the threat of violence to his family. Those who have reassessed the killing say it is more likely that the mafia was behind it, using the prostitute to lure Pasolini in an ambush and kill him because of his outspoken political views and accusations of a mafia-government alliance. Regardless, the case was never reopened and the site of his killing is now a park named after its major victim.

Almost 50 years after his bloody end, Pasolini’s reputation remains solid and controversial as ever with many archived interviews featuring him and those that have worked on his films. Despite his notorious personality, many critics have studied Pasolini’s themes and the adrenaline of his content, engaging in subjects that are taboo and unflattering. It can certainly be exhausting to read into his views and how provocative he was always towards everyone – he faced countless charges of obscenity but was acquitted every time – but it was expressed in a way fellow Marxist Jean-Luc Godard was never able to do in the same period.

In writing for Mamma Roma for the Criterion Collection, writer Gary Indiana described Passolini as “exasperating, narcissistically didactic, slyly self-promoting…devoted to the wretched of the earth with honest fervor and deluded romanticism.” It is a force that can turn anyone off, especially the non-politically inclined, but Pasolini was only trying to find his own place in a world that was never generous to him. His views were outside the left-wing realm and his movies were something that no other Italian filmmaker, not even his close director friend Bernardo Bertolucci, would have considered doing. The body of work could only be done by someone who was proud of being an iconoclast and dangerous, so much so he had to be silenced.