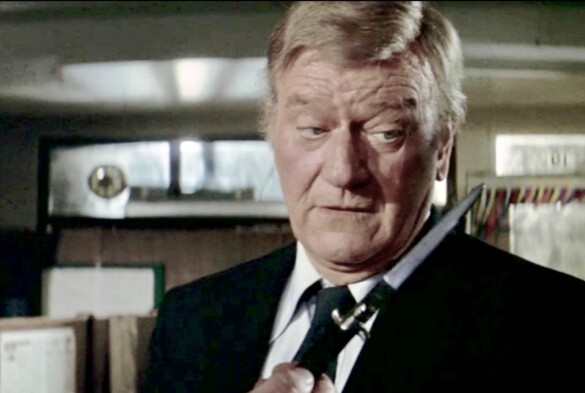 John Wayne made a lot, and I mean a lot, of westerns. Legend says he also made enough war movies that people thought he actually served in World War II. Here, however, is a chronological mix of elusive adventures, lesser known romance, and varying action showing what The Duke could – or couldn’t – do beyond the horses and corrals.

Shipwrecks, swindlers, steamships, and love triangles collide in this colorful 1942 Cecil B. DeMille (The Ten Commandments) mid-nineteenth century high seas adventure starring Ray Milland (The Lost Weekend), Paulette Goddard (The Great Dictator), and John Wayne. Although sailor slang and nautical terms will be tough for some audiences without subtitles, schooner photography, whooshing winds, and thrashing waves invoke the perilous sea. Obvious matte screens, rear projections, soft focusing on the ladies, and a preposterous giant squid can be forgiven thanks to the award winning underwater scenes and well done ye olde diving gear. Key West inquests and stylish Charleston balls keep the two hours intriguing. However, cute monkeys and ship dogs can’t compensate for the stereotypical happy slaves. Captured enemies sold off to another ship are played as humorous, and Susan Hayward (later of the ill fated, terrible The Conqueror with Wayne) is supposed to be Cuban. Progressive pants-wearing businesswoman Goddard lays on the moxie thick, playing multiple sides for her own gain. Milland starts as a pompous jerk, but a begrudging, evenly matched respect grows between the men. Wayne is an angry seaman descending into illegal trade and reckless diving, leading to provocative turnabouts and impressive character dimension. However, the dashing embraces here prove Wayne should have been a romantic lead more often in his youth. This may not be an epic, coastal Gone with the Wind as DeMille may have intended, but it remains a melodramatic tale and seafaring spectacle for fans of the cast.

South America railroads begat explosions, mountain tunnels, bridge perils, and an against the clock quest in this 1947 Technicolor saga co starring rival engineer Anthony Quinn (Zorba the Greek) and railroad financier Cedric Hardwicke (The Ten Commandments). While matte paintings and facades are cardboard obvious and the sound is very uneven; sweet cars, cathedral interiors, sophisticated frocks, and suave suits add flavor alongside dynamite, mining disasters, raging rivers, and dangerous floods. Unfortunately, the romance and adventure feel like two separate movies. Building a risky railroad crossing without any fatalities is just a bit more important than a runaway date complete with Inca ruins at sunset. The overlong two hours plus drags thanks to melodramatic music and soap opera back and forth conflicts when the epic battle of wills should have been much tighter. Judith Anderson (Rebecca) is underutilized and the little woman cliches are tiring on top of Latino stereotypes and a lacking local authenticity thanks to the California production. John Wayne seems a little too old for the role, but he’s an honest foreman who knows his job. The audience never doubts he will get things done right despite misbehaving asides and troublesome contractors. Wayne stands up to the pressuring stockholders and proves he can be a leading man of varied character depth.

Wake of the Red Witch

This 1948 nineteenth century ship bound adventure reuniting John Wayne and Gail Russell (Angel and The Badman) is very similar to Reap the Wild Wind with gold bullion cargo, sharks, cannons, shipwrecks, early diving suspense, octopus duels, and man-eating seashells. Soft volume makes the high seas who’s stealing from whom rivalry confusing and stock footage is apparent alongside an unneeded narration. Trite exposition slows the action by making viewers aware of the storytelling constructs, and what we should have seen at the start is instead told in two flashbacks. Rather than something a la Hornblower, this actually feels like a sea faring western with larger than life men fighting over a dame on the line, giant pearls, and precious water rights. Fortunately, the woodwork, waves, frigates, and sails set the mood in spite of the black and white limitations – adding scope and danger to the double crossings and tension below decks. The age difference between Wayne and the bittersweet Russell, however, compromises the romance and some of the edgy characterizations. The commanding as always Wayne is capable on shore and off, a crusty captain imposing the law on his ship even if his rugged violence crosses the line. Rather than the expected heroic image, it’s quite pleasant to see shades of gray setting off the melodrama and swashbuckling escapades.

Legend of the Lost

Sophia Loren (Two Women) punctuates the dusty dunes and windswept Libyan locales in this 1957 Italian co-production from frequent John Wayne director Henry Hathaway (True Grit). The dancing ladies, pickpockets, and local authorities bending the law for the rich white men are overlong to start with the wrong kind of humor on top of stereotypical Arab mistreatment and local Tuaregs unnecessarily treated as ominous. Fortunately, the beautiful photography captures the atmosphere with seamless horizons, palm trees, and rippling sand. Not unlike a western, here man is small in the harsh Sahara landscape alongside camel bones, ruins, and lost cities. Whispers of treasure and erroneous coordinates lead to going too far on too little water with no turning back, and the divine Roman Leptis Magna columns, statues, and baths are revealed in echoing silence. Skeletons and love letters suggest there’s more to the gems and jewels, but the history repeating itself love triangle is unbelievable as the big temptation in the desert – hurting the discoveries and compromising Loren’s intriguing dubious woman. Dita rightfully says men pretend to be her friend so long as she offers her services, but her trauma is treated as hysterical until the script says it’s time for Wayne to be charmed instead. Wayne’s also too old to play a rakish Indiana Jones, and silly music cues can’t compensate for his unlikable guide for hire Joe January’s demeaning insults. The chemistry blows downright cruel one minute then saucy the next as hero versus drunken role reversals stretch credibility. Despite an undecided tone, contrived lust, easy forgiveness, and convenient rescues; the treasure hunt gets better as it goes on thanks to mirages, thirst, killer spiders, sandstorms, desperation, and unique, time capsule perils.

Funky beats and fast zooms firmly assure the swanky seventies style as our eponymous Chicago police lieutenant clashes with Richard Attenborough (Jurassic Park) and Mel Ferrer (Knights of the Round Table) amid extradition, kidnapping, mobsters, and hit men in this 1975 caper. Retro cruisers and vintage skylines capture the city gruff before the Union Jack and mellow British countrysides create fish out of water contrast. The set up is a little long, with a wavering tone between the ominous orchestrations over-punctuating the abduction suspense and The Duke putting on the charm. Testy pleasantries and constant reinforcement of his “e pluribus unum” jurisdiction are played for chuckles, compromising the dangerous double crosses and hostage demands. Despite booby trap shotguns, bombs in the toilet, and slow motion close calls in the crossfire, it’s easy to zone out during the Royal Mail switcharoos. We forget who’s chasing who and why in the otherwise great high speed action, and strong-arming stereotypical British thugs becomes unnecessarily drawn out good cop bad cop. The detectives don’t really foil anything so much as the crooks do themselves in, yet we know Wayne will get his man with his larger than life stature. His “Irish bastard” breaks down doors as his knock knock, keeping his sidepiece and not yielding to British technicalities. When paired with the very similar McQ the year prior, it makes one realize how the twenty years too old for this Wayne was in many ways wasted in his pre-war prime, and he would only make two more pictures before his death in 1979. Although not serious enough to be a proper crime thriller with deep reflection, Wayne going full on able to laugh at his generational across the pond grit would have been fun to see, too. The pointless bar room brawl peppered with seventies jukebox hits may be the best part here – saloon swagger to ruffle the stiff upper lip with cool, contemporary flair.