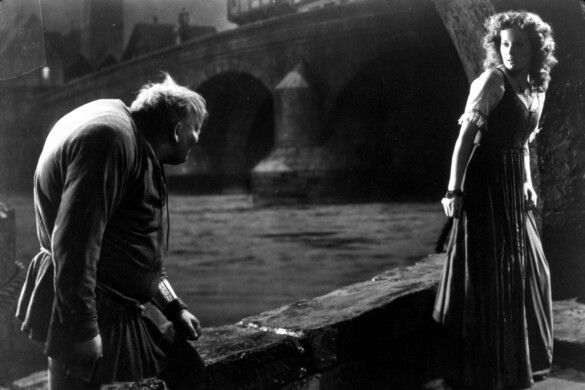 For millennials, Victor Hugo’s The Hunchback of Notre Dame is actually a jaunty animated musical that featured the vocal talents of Demi Moore and Jason Alexander. Disney brought the story to life in glorious, vivid color and packaged their product as a cultural event that would educate children on the importance of studying 19th century French literature. It was one of their least financially successful 1990s musicals but it remains the best known adaptation of Hugo’s vaunted novel. It committed the sin of sweetening a story that was much darker on the page, and it lost some of the cynicism that made it such a powerful plea for tolerance and understanding.

Some would be surprised to learn that Hugo’s novel was adapted into a major motion picture back in 1939. This was the third time that Hollywood had decided to bring the story to the big screen and in the late 1930s when studios were basing most of their major productions off of bestsellers, it made sense to bring the story back to the big screen. RKO Pictures enlisted their best and brightest to work on the film and ended up producing a lively tragedy that is infused with William Dieterle’s personal vision and Joseph H. August’s extraordinary imagery. Rather than being a staid literary adaptation that seems desperate to prove that it deserves to be taken seriously, it is energetic and completely assured of itself.

Sonya Levien and Bruno Frank’s screenplay does streamline the story, but keeps all of the basic framework in place. It is still set in a dangerous, gothic version of 15th century France in which gypsies face discrimination and poor treatment. Esmeralda (Maureen O’Hara), is a young gypsy girl who plans to improve the public reputation of her people when she moves to Paris and begins working as a street performer. Her beauty and spirited personality capture the attention of several male admirers and this causes all sorts of problems for her. She only has eyes for the dashing Phebus (Alan Marshal), but she ends up getting framed for his murder. The hypocritical and prejudiced Frollo (Cedric Hardwicke) was horrified when he became sexually attracted to her and chose to ruin her life in an effort to prevent himself from feeling anything for her. He murders Phebus and then attempts to turn the public against Esmeralda and all gypsies. She fights to stay alive and receives support from several of her allies. Quasimodo (Charles Laughton), a physically deformed hunchback, is particularly bewitched by her and is willing to do whatever it takes to see her go free.

Much of its power is derived from the specificity of the location design and the brilliant evocation of a puritanical society in which people are unwilling to let go of their prejudices. From the very beginning, Dieterle visually references German Expressionist classics. As in The Cabinet of Doctor Caligari (1920), it presents the city as a sprawling residential area that seems to stretch on forever. Esmeralda has fuzzy memories of the life she lead before moving to Paris and her fate is determined by the judgment of Parisian townsfolk. We are asked to imagine them as a unified body, rather than viewing them as individuals with differing thoughts and feelings. They travel in flocks and their opinions are easily swayed by church and government leaders. They will arrive like a Greek chorus and decry anybody who dares to step out of line. Their unmoving rigidity and refusal to acknowledge nuance is contrasted with the oddly shaped structures that dot the city. Esmeralda inhabits a morally ambiguous world in which nobody can ever become the sort of model citizen that local Parisians would idolize. It fully immerses you in the gothic Parisian environment and frequently succeeds at making its point through visuals alone. When the script occasionally becomes overly literal and didactic, the film can fall back on its visuals to retain an air of subtlety.

William Hamilton and Robert Wise’s editing also contributes to the sorrowful, anguished tone of several scenes. They keep the film moving along at a nice clip, without ever rushing through the fairly complicated plot. It isn’t nearly as creaky as other 1930s literary adaptations and the film does not feature overly flashy scene transitions. The invisible editing pairs nicely with Dieterle’s direction, as it brings out some of the finer details of Dieterle’s vision.

It might be a wonderful film, but it is more difficult to see why it is viewed as an iconic romantic drama. Alfred Newman’s florid musical compositions and O’Hara’s kitschy costumes would have you believe that this was a campy, old-fashioned romance. In reality, nothing could be further from the truth. Esmeralda and Quasimodo fall passionately in love with people who don’t feel anything for them, but love does not play a central role in the narrative. Political corruption and moral principles end up taking precedent over the powerful emotions that Esmeralda feels. Part of the point of the story is that campaigning and weaponizing the support of the public is more important than the will of a determined individual. This was one of the more inspired choices that AFI voters made, as the film is not very popular in the 21st century, but it isn’t exactly a love story. This is just one of many examples of AFI voters being unable to follow the criteria that they set for themselves.