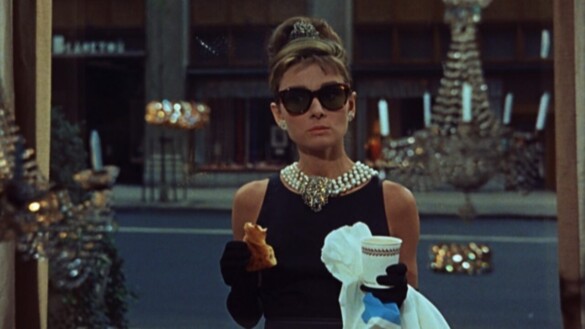 Breakfast at Tiffany’s has a very complicated, almost paradoxical legacy. To most, it’s that fun romantic comedy in which Audrey Hepburn plays an adorable soignée fashion plate who lives it up as a café society girl during the early 1960s. They look towards Holly Golightly as an aspirational figure because she’s pretty, fashionable, quirky and able to wander around New York all day without having a ‘real’ job. I assume that a considerable portion of the young women who idealize Golightly are people who haven’t actually seen the film. They don’t care to consider the fact that Golightly is actually a prostitute who has to entertain wealthy older men in order to fund her lifestyle. They certainly don’t seem to pick up on the fact that Golightly is actually a woman who was forced to become a child bride at the age of fourteen. Viewers tend to brush aside most of the darker implications that are hinted at by the script and hold onto the idea that this is a feature length Givenchy commercial.

I don’t think that it’s any coincidence that the film is looked back on as a light, fluffy romantic comedy. Like so many films made under the production code, it takes great pains to avoid bringing any controversial content to the fore and, at times, you are left wondering why they even felt the need to turn this into an adaptation of Truman Capote’s controversial novella. All of the things that helped the novella to capture the imagination of so many despairing, unhappy readers were removed from the story when it was brought to the screen. They keep the memorable character names, New York setting and the basic outlines of the plot but completely excise all of the material that made the novella interesting.

George Axelrod’s screenplay always feels like it’s torn between being a generic studio comedy in the style of Come September (1961) and a cynical exploration of the soullessness and vacuity of the café society set. Axelrod leaves in a few stray references to Golightly needing to exchange sex for money but he also has to find a way to end the film with a scene in which Golightly and Paul Varjak enter into an ordinary heterosexual relationship. It often feels like a film that is at war with itself and you keep hoping that it will allow Varjak to be gay and end with Golightly running off to yet another foreign, exotic locale, without having resolved any of her problems.

The film is particularly disappointing when it comes to its consideration of Golightly’s efforts to reinvent herself and escape from the life that was forced upon her at an incredibly young age. Golightly is most fascinating as a damaged drifter who can never quite achieve the freedom that she desires. She has to rely on the support of others to get by and will always be somebody who thinks that the grass is greener on the other side. Capote acknowledges the fact that Golightly is chasing after happiness and fulfillment in places where it does not exist, but he avoids turning her into an object of pity or disgust. Capote never implies that Golightly was wrong for trying to escape from rural Texas and even celebrates her somewhat successful reinvention. He crafts her into a proto-feminist heroine who tries and fails to build the life that she wants.

There are times when the film does play around with the bitter, pinched emotions that the characters in the novella feel. When Golightly performs “Moon River”, a song about the pains of being a small town resident who wants to move to the big city and escape from the mundanity that surrounds them, it’s difficult not to be moved. It serves as such a perfect encapsulation of Golightly’s feelings of regret and sorrow, as she almost seems to be nostalgic for the period of her life in which she was just an impressionable young girl who thought that she could make it in New York City without having to make any major sacrifices. Even as an older, wiser woman she holds onto the version of New York City that she used to fantasize about. This is one of the few times when the film attempts to turn Golightly into more than an absurdly beautiful clotheshorse and it really does pay dividends. You feel like you have a strong understanding of what drives her to be so impulsive and irrational and wait for the rest of the film to follow through on the expectations that have been set by this scene. It’s a real shame that the film doesn’t continue to explore her character in any depth.

It would be ridiculous to pretend that Hepburn doesn’t look utterly divine in that iconic little black dress, but the beauty of the costumes is overshadowed by the presence of Mr. Yunioshi, a horrifically racist caricature of Japanese people. It is fair to say that attitudes towards race and gender have significantly evolved over the past 60 years but, even by 1961 standards, this was considered to be racist. Critics at the time were critical of the casting of Mickey Rooney, a Caucasian actor, in the role and noted that the portrayal would be offensive to many. It’s one of those jokes that just doesn’t fly today and it’s easy to question whether it was ever really funny. Rooney’s performance is so broad that it’s difficult to believe that discerning audience members were chuckling at the bits of business that he incorporated into his performance.

It is difficult to mount an argument in favor of this film when so many of its best elements could probably be better appreciated in a different context. If somebody wanted to see Audrey Hepburn’s beautiful gowns, they could check out the Givenchy exhibit at Morges Castle in Switzerland. They could get a firsthand look at her chic clothing without having to suffer through an entire feature film.