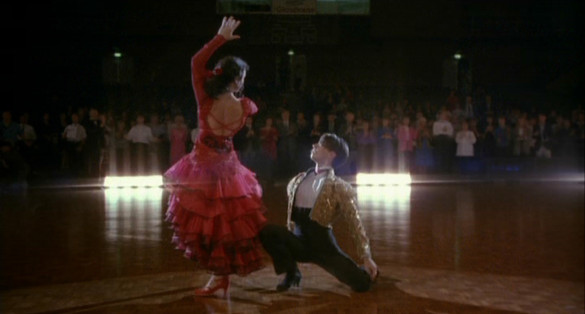 Synopsis: A maverick dancer risks his career by performing an unusual routine and sets out to succeed with a new partner.

DIRECTION
While Strictly Ballroom is outdated now, it was a critic success in 1992 for a reason. Baz Luhrmann does a great job of incorporating a mockumentary style of shooting that captures your attention from the start. There’s a lot of dancing and the opening sequence doesn’t shy away from it. The film has some eloquent costumes which sets the tone early for the experience you’re about to have. I think Luhrmann gets descent performances out of his main actors and uses the camera well to create a fun dance number. If you get outside of the subject material (for those of you don’t like ballroom dancing) it’s a descent watch with some fun humor. I think the story is well written and Luhrmann does a good job of giving it legs to stand on its own. It has some bad and quick edits that are at times distracting and the cartoonish sounds and look I think draws you away from the story, which loses its appeal. It’s not Luhrmann’s best film, but it was a good start.

SCRIPT
Luhrmann wrote the script long before 1992 and later developed the screenplay. I think the dialogue is good for the most part but he loses me with the mother, played by Pat Thomson. The mother’s lines are more annoyance than anything, but Thomson delivers them well. If the goal was to be the annoying mom that you don’t want to have, she does a fantastic job. However, I love the story of Scott Hastings and how it’s his story of becoming his own person. In a world where his mother is trying to create his path for him and control his fate, he rebels, creates his own dances, and lives his life. I like the idea of him being who he is supposed to be and him not settling for a life that’s not his. I think Luhrmann’s tells that story well and it comes across well on the screen. Some of it is cheesy and predictable but overall it’s a success.

PERFORMANCES
Paul Mercurio does a great job of playing Scott Hastings in this film. I don’t feel like he gets a great supporting cast to surround him which makes the film seem dull at times. I also loved Barry Otto who played Mr. Hastings in this movie. He’s not a big character at all until the end of the film, but he has such a subtle humor throughout the movie that steals the show at time. His presence at the end of the movie is also great and it makes the story even bigger and better to me. The rest of the cast is average at best which drops the grade for me overall.

SCORE
David Hirschfelder gets the nod to score for Luhrmann in his first film and the score adds some good elements that I thought was very necessary. In a movie about dancing, music is a key element to the overall vibe of the film. Hirschfelder is a good composer and I think adds the appropriate sounds and mixes to what could of made this film better than what it was.