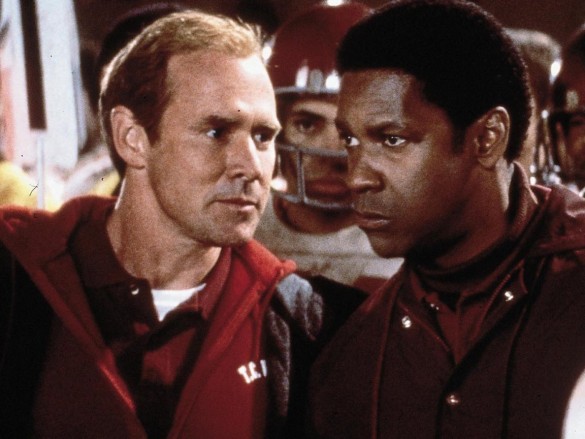 Synopsis: The true story of a newly appointed African-American coach and his high school team on their first season as a racially integrated unit.

DIRECTION
Quit while you’re ahead. That’s kind of what Boaz Yakin did as he hasn’t really directed much since Remember the Titans (although he gets major props for writing this year’s biggest surprise, Now You See Me). Yakin’s direction is pretty simple but very effective. You definitely get a good sense of being in 1971 Virginia with the backdrops, costume design and musical choices. And the football scenes are shot particularly well as you get a good sense of what’s happening and how it’s happening. Yakin might not have directed much since then, but he doesn’t have to after making what it the best football movie ever made.

SCRIPT
The story of Remember the Titans takes place in 1971 Virginia when two schools (one white, one black) integrate to form one and coach Herman Boone (black) is hired to coach the football team over coach Bill Yoast (white). All of this causes friction among the coaches, the players, the school and the community — and it makes for a pretty incredible movie. Gregory Allen Howard, who later went on to help write 2001’s Ali, does a great job of making us really get invested with everything that’s going on from the relationships between coaches and players to everything that’s going on on the football field. It’s inspirational, it’s motivational, it’s emotional, it’s intense and it’s amazing. It never gets too sappy or too preachy (it’s Walt Disney after all); it’s just a damn good story and it’s told really well.

PERFORMANCES
The performances in Remember the Titans are top-notch beginning with Denzel Washington and Will Patton. Washington and Patton play coach Herman Boone and coach Bill Yoast, respectively, and they’re chemistry and the way they grow respect for one another and become friends is pretty amazing. Both have their moments to shine and both give some pretty emotional, intense “talks” throughout. Also doing an amazing job and showing incredible chemistry is Wood Harris and Ryan Hurst as teammates Julius Campbell and Gerry Bertier, respectively. Their scenes together are some of the best, most emotional, most intense of the entire movie and they do a really good job of getting those feelings across. The other standout performance comes from a young Hayden Panettiere as Yoast’s tomboy, football-loving daughter Sheryl. Panettiere steals a lot of the scenes she’s in and gives us a different aspect on things that are going on. While those mentioned are the major performances, everyone does a great job from Donald Faison (Petey) to Ryan Gosling (Alan) to Kate Bosworth (Emma) — just terrific performances all-around.

SCORE
Trevor Rabin’s score for Remember the Titans is a thing of beauty, perfectly complementing the intense football action (i.e. Yoast yelling at his players to not allow the opposing team to cross the line of scrimmage or the Titans’ final play of the season) or the quiet character moments (i.e. opening and closing scenes and Julius being with Gerry in the hospital). If the score wasn’t enough, there’s also the soundtrack, which is one of the best for any movie ever band. Songs from the likes of The Temptations, Bob Dylan, Cat Stevens, The Hollies and so on only add to the aesthetic of the movie.