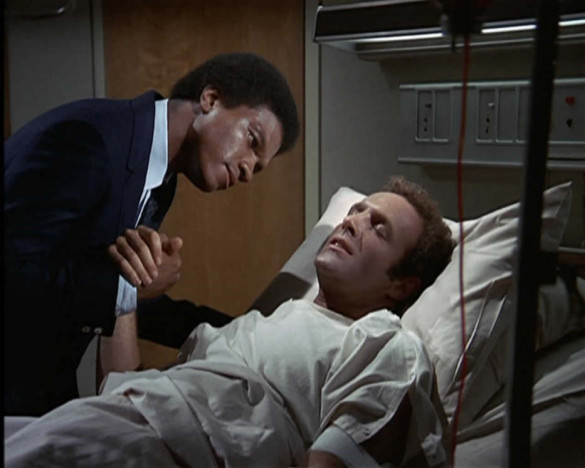 Synopsis: Based on the real-life relationship between teammates Brian Piccolo and Gale Sayers and the bond established when Piccolo discovers that he is dying.

DIRECTION
Buzz Kulik’s Brian’s Song definitely has the made-for-TV feel but it had certain elements that do bring something to the table. His camera work is definitely in the 70’s style but has some really great moments. The edits between real football footage and his own shots of his actors on the “sideline” of the football games are actually pretty good and flawless. It has a real football game aesthetic. Outside of the Chicago Bears’ practice field locations, the direction was pretty solid for what this film was trying to do. There are some elements however that didn’t work well and some scenes felt really out of place. The focus of the film was lost at some point, partially due to a mis-focused script, and it became a little cheesy in some areas. Given the budget though and what he had to work with, Kulik did a descent job.

SCRIPT
The script is mostly where this film lacks. Gale Sayers and Brian Piccolo have an amazing story that has a really tragic ending. These are the first two guys to room together in the NFL where one was black and the other white. But the script never goes into that or what makes that moment so important. The story mostly focuses on the relationship between Sayers and Piccolo, which is a good thing, but it lacks in a few areas and at some point loses it’s main focus a little bit. The emotional moments near the end are hard to get to with cluttered cheesiness that fills the first two acts of the film and it doesn’t have the depth to reach most people who don’t know the story that well.

PERFORMANCES
James Caan and Billy Dee Williams are pretty good here for what this film is trying to accomplish. Caan especially is really funny and makes Piccolo very likable and engaging. Williams on the other hand is mostly good, but struggled through a few moments where he didn’t know how to react. The emotional chemistry between the two was solid, especially toward the end but the story makes it hard to make it gripping. The rest of the actors are hit or miss and do not add anything here. It’s mostly the James Caan show and he shined really well.

SCORE
Michel Legrand, who’s a great composer, was mostly average here. The fun elements and the football scenes were great while the emotional elements and dramatic stuff was more of a disappointment. A few scenes even felt like horror-film music when the drama ramped up. Overall, it’s very forgettable.