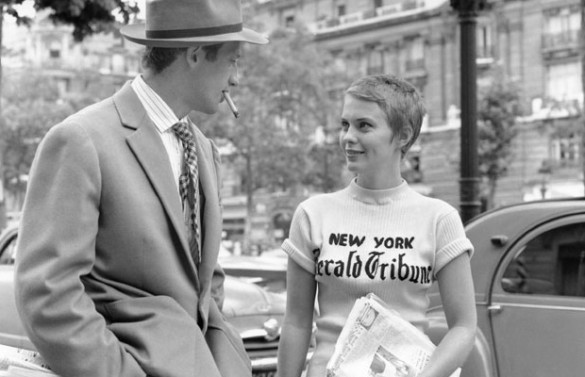 Synopsis: A small-time thief steals a car and impulsively murders a motorcycle policeman. Wanted by the authorities, he reunites with a hip American journalism student and attempts to persuade her to run away with him to Italy.

Jean-Luc Godard’s Breathless is the first film in our French New Wave Movie Series and it is regarded by some as perhaps the best in French New Wave. There’s no denying the craftsman of Godard’s filmmaking in Breathless, which is quite stellar. His use of jump cuts was revolutionary for the time and the tracking shots of this film is simply incredible. Godard was clearly experimenting with the camera and he succeeds masterfully in creating an immersive aesthetic.

However, the film overall is rather cold and distant. The characters of Patricia and Michel embody this “cool” detachment from cultural norms, the dismissal of authority and become nothing more than narcissistic young adults obsessed with themselves. Now, there’s nothing wrong with exploring morally gray characters, looking at you Bonnie & Clyde, but in Breathless, Patricia and Michel’s “cool” is pseudo and false. Their actions are inconsistent and too phony for the film’s ethical dilemma to be felt. Sure, Godard may have only been concerned with his filmmaking techniques and the story “shouldn’t matter”, but that argument holds no weight for me.

To Jean-Paul Belmondo’s credit, Michel is a Grade-A, first-class d*** and he pulls that off excellently. He easily slips into the facade that Michel carries throughout the film, regardless of how cold and uninteresting it may be. Jean Seberg steals Breathless for me though. She’s charming, beautiful and radiates with energy. You can sympathize with why Michel is so drawn to her. Everything Seberg does gives life to Patricia, and she became the vehicle that carried me to the end.

The biggest problem of Breathless is that Godard seemed interested in more than shaking up filmmaking norms. The film raises some rather interesting questions regarding cultural expectations and how gender roles play into all of that. And while that all sounds great on paper, in execution, those notions are simply brought up, as if to say something cool, but Godard spends no time justifying why he wanted to bring up the commentary in the first place. He lazily throws it in the audience’s face, only to take his characters in different directions that have little to do with those questions he raises. As a result, his characters start to contradict themselves and the film overall loses it’s “cool” factor.

Let me be clear, Breathless isn’t a “bad” film. In fact, the filmmaking of its time is spectacular. The techniques Godard employs is fascinating to watch but in the end, it’s only that. The cold demeanor of Breathless isn’t very effective and as a result, it feels conceited and in a word; fake.

Hear our full review on Episode 177: