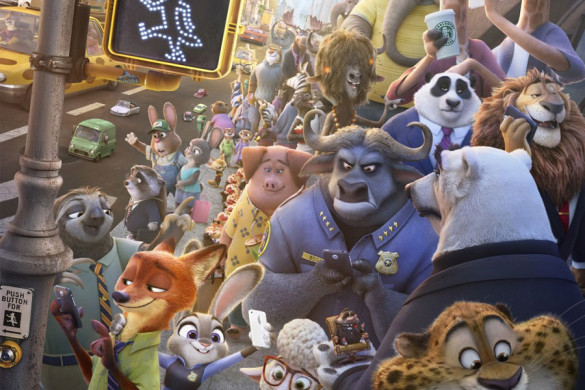 Synopsis: In a city of anthropomorphic animals, a rookie bunny cop and a cynical con artist fox must work together to uncover a conspiracy.

It was the mid to late 1990s and into the early 2000s when Pixar began leading the charge in modern animation, leaving Walt Disney Animation Studios essentially in the dust. The quality of Walt Disney’s films (also Pixar’s parent company) seemed to remain dormant for much of the 2000s, but then came Bolt, then came The Princess and the Frog, then Tangled, Winnie the Pooh, Wreck-It Ralph, Frozen, and Big Hero 6; all quality films evident of a comeback. And aside from the wonderful Toy Story 3 and Inside Out, it was now Pixar’s turn to find themselves in that same dust storm; oh how the tables have turned. Rather than continuing to churn out quality animation, Walt Disney chose to do something daring; they fully sealed the deal that they are now the ones leading the charge in modern animation, as Zootopia may be the studio’s best film since the early 1990s.

Zootopia takes place in a world of anthropomorphic animals, focusing on our heroine Judy Hopps (voiced by Ginnifer Goodwin), a rabbit who dreams of becoming the first rabbit police officer of the city of Zootopia, a place built for all mammals, specifically predator and prey, to live together equally. The world-building of Zootopia could almost be a feature length movie on its own; Judy’s train ride into this extravagant city is one of the best forms of visual storytelling the world has seen so far this decade. Not only is the animation itself breathtaking and beautiful, but it’s the level of detail and research done to believably tell the viewers how these mammals can physically coexist in this world; “Rodent Island” is a personal favorite.

Judy then finds herself tangled in a “missing mammals” case, and is forced to team up with a sly fox Nick Wilde (voiced by Jason Bateman, who arguably gives one of the best voice performances of late), a clever con artist who has embraced the predatorial stereotype of who he is (more on that later). Judy is not meant to take on this case, she was assigned parking duty on her first day by Chief Bogo (a great Idris Elba), but circumstances bring her and Wilde together, creating a helluva dynamic duo. Their chemistry is immediate, and it’s here the script’s wit and charm is able to shine; the jokes are clever, constant, sarcastic, and even satirically on point (that sloth scene at the DMV is both hilarious and true). Top it off with a neo noir aesthetic with references to L.A. Confidential, Chinatown, and The Godfather, and Zootopia becomes an incredibly entertaining romp, well balanced equally for children and adults; adults can catch the Breaking Bad reference while children can laugh at the “upcoming” Disney films like Frozen 2.

All this makes for a very entertaining and straightforward animated flick, and for a while that’s really all it is, it just happens to be very good at doing it. It is not until the film’s turning point when Zootopia becomes something more entirely. On one end, it is about striving for your dreams, even ones that everyone says you can’t do; a fine moral for children. But on the other end, and boy is there another end, Zootopia is a surprising and profound commentary on our current racial crisis, dealing specifically in racial stereotypes and prejudice. The notions of predators vs. prey is a clear allegory for the black vs. white conflict, especially when these predators begin resorting back to their predatorial states provoked by the prey.  But this can even be tied to minorities in general, considering what continues to occur overseas, in the job market, among other places. Lump the police angle on top of this, especially when compared to what’s on the news nearly every day, and Zootopia becomes essentially timeless. It’s a clear statement for why racism exists, and blames it on the world’s lack of open-mindedness, unfortunately replaced by rational ignorance.

If the case hasn’t already been made, Zootopia is not just a great animated film, but an important one.  It may not be perfect (Michael Giacchino’s score lacks the punch of his previous work, and a shoehorned appearance and song by Shakira feels almost like it was just a Disney necessity), but it shouldn’t need to be perfect, as it fully makes aware of the imperfections of today. Zootopia is evidence of the resurgence of Walt Disney Animation Studios, bringing back joyful memories of seeing The Lion King and Aladdin for the first time. Fortunately, unlike the issues it presents, Zootopia’s greatness is here to stay.