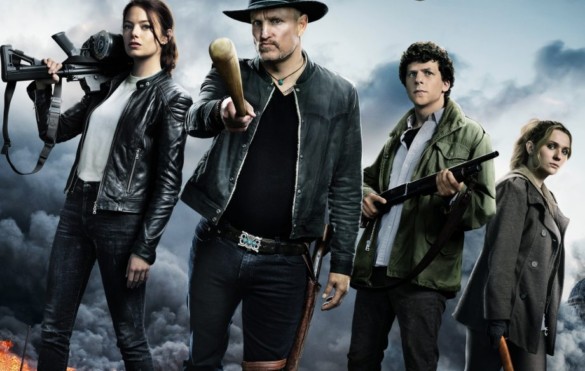 Synopsis: Columbus, Tallahassee, Wichita, and Little Rock move to the American heartland as they face off against evolved zombies, fellow survivors, and the growing pains of the snarky makeshift family.

Ruben Fleischer’s Zombieland: Double Tap is the follow up to 2009’s Zombieland.  Where Zombieland succeeded in its genre-flipping action, sharp wit, and unusual characters, Double Tap fails due to the staleness of the subject.  The original Zombieland felt like a breath of fresh air, turning the zombie genre on its head, combining it with a buddy comedy and an action film.  However, Double Tap feels like all that originality is spent and the filmmakers are coasting on the fumes of its cult-followed predecessor.

Since the last film, Tallahassee (Woody Harrelson), Columbus (Jesse Eisenberg), Wichita (Emma Stone), and Little Rock (Abigail Breslin) have stuck together while living in a dystopian world inhabited by zombies.  Once they take up residence in the White House, domestic doldrums eventually set in and the gang becomes restless. Soon, one of the group leaves, sparking a rescue attempt that drives the narrative to new characters, new obstacles, and new zombie types.

Unfortunately, the plot of this film is extremely bare-bones.  There is very little to drive this film forward. Instead, Fleischer relies on his characters to push the film, and in many ways this fails.  First, these characters are not well-developed and deep. Second, the relationships in the film feel hollow and forced. When you hang the whole film on character interactions and purpose, it helps to make them seem human and not flimsy stereotypes.  Third, building from the first film, these characters somehow feel like caricatures of themselves. There is even a moment in the film when Tallahassee and Columbus come across a pair of virtual doppelgangers. Albuquerque (Luke Wilson) and Flagstaff (Thomas Middleditch) are carbon copies of the two protagonists and mimic Tallahassee and Columbus’s personalities in almost every way.  This would seem clever and funny if Tallahassee and Columbus were worthy of homage, but they aren’t and it feels exhaustive having two versions of these bland characters side by side. This sequence is dreary and derivative, but fortunately leads to one of the better action sequences of the film.

Herein lies the one saving grace of Zombieland: Double Tap.  The frenetic action sequences backed by heavy metal music invigorated the boredom of the rest of this film.  In these moments, the characters and zombies feel at home while the choreography and camerawork feel effortless.  The action is crisp with moments of altering film speed to emphasize and explore. Comedy sight gags are riddled throughout these sequences which adds levity to the gory and bloody action.  A Zombieland fan will enjoy how these scenes play out as they are familiar, but with an added amount of adrenaline.

These comedic action moments that made the first Zombieland so fresh, are few and far between.  Instead, the film focuses on one-sided characters, little to no story, and cognate stereotypes to fill screen time.  Zombieland should have been a lone film, secured in its cult status.  With Zombieland: Double Tap it is almost as if no one wondered what these characters were doing and the filmmakers answered with a sigh and a response of “nothing much.”