Movie Review: “Wild Mountain Thyme” is an Eccentric Trip to the Past 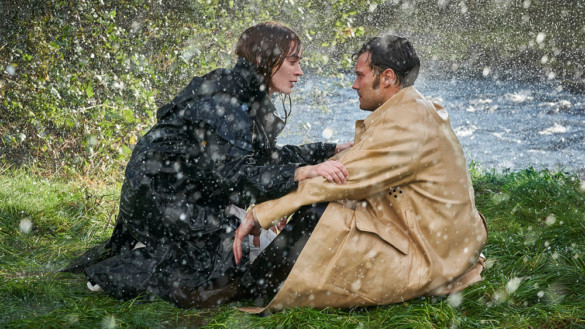 Synopsis: Rosemary Muldoon has her heart set on winning her neighbor Anthony Reilly’s love. Stung by his father’s plans to sell the family farm to his American nephew, Anthony is jolted into pursuing his dreams.

It has been eight long years since we had our last John Patrick Shanley film, and 30 since he directed a romantic movie. The American filmmaker has given us exemplary romantic films with both Moonstruck (which he wrote) and Joe Versus the Volcano (which he wrote and directed), so whatever he has in store is a reason for anticipation. This year he is back with Wild Mountain Thyme, an adaptation of his play Outside Mullingar that takes us all the way to rural Ireland.

The movie focuses on Rosemary (Emily Blunt) and Anthony (Jamie Dornan), young and attractive people that have been farm neighbors their whole life. While Rosemary is head over heels for him, he seems to be lost in his mind with weird preoccupations. When Anthony’s father, Tony (Christopher Walken), threatens to sell their farm to his American nephew Adam (Jon Hamm), Anthony is pressured to decide what he wants to do with his life, with emphasis on whether he wants to be with Rosemary or not, because apparently everything in this community revolves around marriage and heritage.

The story, reflecting the previous romantic efforts in Shanley’s filmography, is filled with quirky and rhythmic dialogue, constant clever confrontations between Rosemary and Anthony, and scenarios that offer humor, traditional music, and ravishing views of the Irish landscape.

In his previous scripts, Shanley has offered many instances of longing and complicated mess between his romantic couples, and here this over-complication continues. In fact, it would be easy to say that the movie takes us back to the 90s when this kind of narrations were in high demand. Wild Mountain Thyme feels like a trip to the past, rescuing what made the comedies from that era so cherished and reprehensible under our modern eyes.

While some conflicts exist regarding Anthony’s farm and the appearance of his cousin, the film focuses on the love story between Rosemary and Anthony, or rather, in the infatuation that clearly exists from her to him. Anthony, as brought to life by Jamie Dornan, is a clueless man that does not find himself in this world and has a love-hate relationship with his farm and his Irish reality.

Nevertheless, at his essence, he is adorable and noble (himbo alert), qualities that are shared with every Irish character in the movie. Everyone is quirky, eccentric, and even sometimes flirt with simple-mindedness, something that becomes evident once Adam appears in scene with his American pragmatism and his desire to show off.

In this respect, both leads are challenging to bring to life and to be appreciated by the audience. They are cute and entertaining with their problems, but they over-complicate their lives with poor communication skills. There is not a real obstacle that separates them.

The way the actors bring their characters to life is a barrier in and by itself. While I will not delve on the accents, which are thick and exaggerated, but fall out of my area of expertise, it seems as if Dornan is in a romantic comedy and Blunt in a dramatic epic. They are in different frequencies, in which Dornan’s interpretation works much better for the silly and endearing material at hand.

Dornan presents a lovable and existential character – he is tortured by a “weirdness” in his head, does not believe that he deserves to be loved –, and Blunt offers the latest example of a manic pixie dream girl. Her sole existence revolves around Anthony, she constantly tries to convince him about his own feelings, and she is always there waiting for him to open his eyes and find his happiness. Even the recent loss of both of her parents is quickly dismissed to readjust the attention to her unrequited love that may not be unrequited after all because Anthony is clueless, not indifferent.

The movie dangerously flirts with presenting a strong female character that is resolute on what she wants – in this case, Anthony – or just offering a unidimensional woman that is obsessed with this man. Unfortunately, the story leans on the latter rather than the former. Although Blunt is very committed to her character – suffering, offering tongue-twisting dialogue, or singing folk songs – she is exasperating.

The supporting cast, in contrast, is endearing. Christopher Walken as Tony provides the most insightful moments, offering regret and growth in a couple of scenes. His moments with Dornan are the best parts of the movie. Dearbhla Molloy in her brief role as Rosemary’s mother is funny and stubborn. While Jon Hamm is effective as Adam, his presence is a mystery, especially in the final act of the movie.

Wild Mountain Thyme is an eccentric film that seems to work better as a play. It revolves around love and endurance, characteristics brought to life by quirky characters that are too involved in their insignificant issues to appreciate the possibilities that exist outside their heads. The script feels old-fashioned, offering contrasting results throughout the duration of the movie: sometimes it is adorable, sometimes reprehensible. Nevertheless, it offers warm moments filled with nostalgic longing for romantic epics.