Movie Review: Primitive and tribal, ‘We the Animals’ magically warms the body and soul (#BodyHeat) 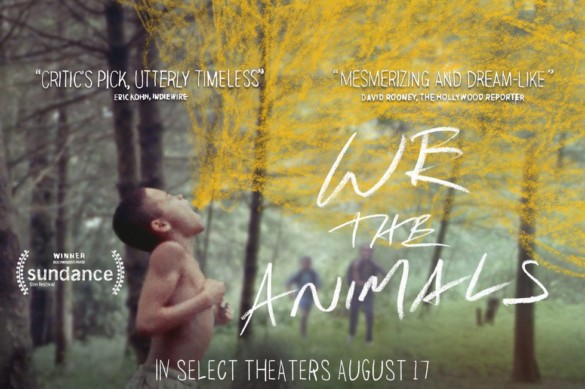 Synopsis: Manny, Joel, and Jonah tear their way through childhood and push against the volatile love of their parents. As Manny and Joel grow into versions of their father and Ma dreams of escape, Jonah embraces an imagined world all on his own.

Transitioning from documentary filmmaking to your first scripted feature can sometimes be problematic, as documentaries are defined by the way they document information, usually as a means of education or for historical context. We often say how movies should show and not merely tell, but documentaries require a crucial yet unique form of telling to succeed, a tactic that doesn’t always work in fictional drama.

But with We the Animals, Jeremiah Zagar’s scripted debut, I cannot recall ever seeing a documentary filmmaker tackle his first scripted feature with this much opacity.

There is a script to be sure in We the Animals (co-written by Zagar alongside Daniel Kitrosser, based on Justin Torres’ loosely autobiographical novel), but it’s one that refuses to let you in on the film’s inner thoughts. You know what happens narratively, but maybe not-so-much thematically, a tactic that purposefully mirrors the mentality and confusion of our young central hero. Zagar understands that children are nature’s most confused beings, which makes We the Animals wildly inventive and immersive in its innocence, and a primitive and tribal visualization of family life in pastoral America.

We the Animals almost unfolds like a series of vignettes; there is an overarching story, but it’s a refreshingly simple one with very little setup. The film follows a family of five on the economic fringes of rural eastern Pennsylvania, seen through the eyes of youngest brother Jonah, played magnificently by Evan Rosado. Jonah and his brothers Joel and Manny (Josiah Gabriel and Isaiah Kristian) experience firsthand the “bipolarity” in their parents’ relationship at the hands of such economic hardships; Paps (played by Raul Castillo, in a performance that should be garnering more awards consideration) periodically takes out his abusive frustrations on Ma (a wonderful Sheila Vand), acts of violence that all three young boys are sadly present for. Time and time again, Ma and Paps resort to their own form of reclusiveness and neglect, inadvertently creating a distance between themselves and their boys; this forces Jonah, Joel, and Manny to fend for themselves among the natural Pennsylvania landscapes, where their brotherhood is all they possess to keep each other warm (a reoccurring chant where the boys whisper “Body Heat” serves as that warmth).

Ma and Paps’s actions may be flawed, but their love for their three boys is not. Zagar is equally as concerned with their mistakes as he is with their affections, and that awareness in both trickles further into Ma and Paps’ own self-awareness, knowing how their selfish acts have an effect on their children. In one of the film’s best scenes, Paps eventually returns home after a long stretch of reclusiveness, and in an instant where he briefly shows his physical affections for Ma, he neglects to see Jonah, Joel, and Manny tempting him for a game of hide-and-seek. Paps then embraces the game, only for the scene to conclude with all three boys beating their father while screaming, “You were supposed to find us.” In the short term, their screams merely reflect that moment of gameplay neglect, but their screams take on a completely different meaning when viewed in the long run. Their lashings of violence are clearly influenced by Paps and his abusiveness toward Ma (tendencies that Joel and Manny eventually grow into), but following Paps’ long stretch of selfish absence, perhaps the phrase “You were supposed to find us” actually translates to “Where were you when we needed you?” Paps has finally come home, but perhaps the boys’ father didn’t come back with him.

This is just one of many “vignettes” in We the Animals, but their narrative importance is merely secondary to Zagar’s primary intent. Zagar is more concerned with simply capturing a fragment of time in one boy’s confused youth, one that unfolds like scribbles in Jonah’s own secret notebook. These events, all seen from Jonah’s point of view, progress with fragility and uncertainty, but never lack in bright and optimistic coloration, as visualizations of Jonah’s notebook pages come to life. There’s plenty of magical realism at play here, sometimes to the point of fantasy (sequences under water and a muddy grave are standouts), but Zagar never explains them to us; his approach is clearly influenced by the likes of Terrence Malick, as well as Barry Jenkins’ masterpiece Moonlight, but Zagar’s voice is still his own. This may make for a narrative that feels too scatterbrained for some, but from the point of view of a child that’s precisely the point; if we’re confused, that’s because Jonah is confused.

However, there is a reveal of sorts in the film’s climax that does recontextualize much of Jonah’s confusion, which in truth may be more rooted in loneliness and sexual identity. At one point, while in the family truck with Ma and his brothers, Ma asks if he would like to go to the city, to which he asks, “Are there more people there like me?” While in the moment this “revelation” didn’t fully work for me (I initially found it somewhat pandering), I accepted it when I understood that Jonah himself doesn’t even realize a revelation took place at all, and perhaps these feelings of his have been there all along. For only a brief moment, Jonah seems to reach some sort of clarity, but sadly that feeling is short-lived; if anything, Jonah’s confusion and isolation only strengthens by the film’s final minutes, regressing back to that earlier lonely spirit of his. Love was once strong in his family, but now neglect feels stronger than ever, even if it’s only he who feels that way, never quite knowing why.

Initially I had little idea how much I enjoyed We the Animals, but like all primitive beings (especially children), Zagar’s approach had a way of sneaking up on me, and as such the film continued to evolve. But never once did it merely evolve into just one idea; the film remained open-minded about one’s fragmented innocence, continuously scribbling itself away like a young boy’s secret notebook. I found myself warming up to We the Animals the more I pondered on it, even as I considered my own personal biases (as a Philadelphia native, the eastern Pennsylvania setting is literally near and dear to me), but I view that warmth as synonymous with love and affection, bringing us one step closer to Jonah himself. Adoration is what warms the body and soul, and sadly our central hero leaves this story colder than before.

Find those you love and continue to keep each other warm (#BodyHeat).