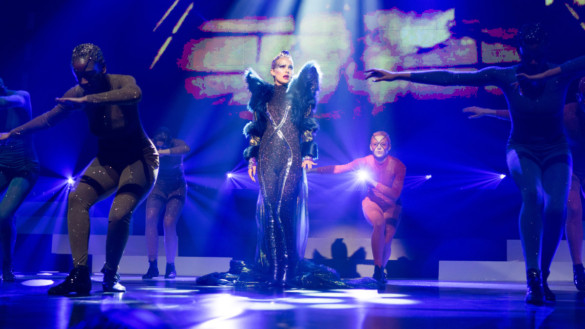 Synopsis: An unusual set of circumstances brings unexpected success to a pop star.

“I don’t even know what that was supposed to be.” This is what my boyfriend said to me after I showed him the trailer for Vox Lux when it was first released last month. I was befuddled. Mystified. Kinda angry. Who cares? It’s Natalie Portman. Playing a wildly over the top pop star. In a time where A Star is Born and Bohemian Rhapsody are dominating the box office. I was all in from the get go. Then, as I walked out of the theater, I couldn’t help but wonder to myself, “What was that supposed to be?”

In the days following my viewing experience, I’ve been trying to figure out if Vox Lux is the wildly complicated, thought-provoking kind of movie that takes days or weeks of pondering and multiple rewatches to truly enjoy, or if it was just a smorgasbord of awards bait nonsense that wasn’t even worth the initial two hours it took to watch the damn thing. To its credit, I’m leaning more towards the former and am looking forward to testing this theory with multiple rewatches in the future. I think the indecision in this regard, though, stems from the very intentional emotional distance writer/director Brady Corbet keeps between the audience and the narrative. This distance is obvious from the opening scene of the film which depicts a very graphic and upsetting act of terrorism. The scene plays out largely as a methodical series of images used to communicate facts rather than emotions, not unlike news stories covering real-life horrifying events. The movie itself is even framed as a documentary, which feels simultaneously like a tongue-in-cheek reference to the ever-popular musical biopic genre and a very effective technique to maintain emotional distance from these characters.

While talking about the emotional distance this movie creates, it’s important to note that Vox Lux isn’t so much a story focusing on our protagonist, Celeste, as it is a hyperbolic allegory about a generation’s loss of proverbial innocence. It’s a heady premise but I’m not entirely convinced Corbet succeeds in delivering the promise of that premise. The overstated images and characters don’t quite mix with the understated themes, and the emotional distance makes it difficult to find any dark humor in the story, and even harder to discern if any was intended to be found in the first place.

Despite my confusion and indecision regarding the themes and overall message of this movie, I have to admit that Corbet surrounded himself with such an excellent team that it was very easy to sit back and enjoy the spectacle without worrying too much about what I was watching until the movie ended. For as much as I love Portman and was excited to see her singing and dancing as a Lady Gaga-esque pop star, Raffey Cassidy absolutely stole the show as Young Celeste / Albertine and I wish the Sia-written and Cassidy-performed song “Wrapped Up” was a contender for Best Original Song because it was amazing, not just as a stand-alone song but as an integral piece of the narrative and the film as a whole. Also, with the emotional distance created in the script, the weight of eliciting emotional responses often fell to the cinematographer and the editor (Lol Crawley and Matthew Hannam, respectively), and both spectacularly delivered.

In sum, Vox Lux was an emotionally confusing, exhausting, thought-provoking bundle of talent with amazing music, spectacular costumes, and some of the best editing I’ve seen all year. It’s a bit of a mixed bag and I can’t recommend it to just anyone, but I really wish more people were going out and seeing it. If you like Natalie Portman, pop music, social commentaries, dark humor, and/or cynicism, or if you just can’t stand movies like A Star is Born and Bohemian Rhapsody, then this one’s for you — see it while you can, because I don’t think it’ll be in theaters for much longer.

Grade Rating for script: a solid B that will undoubtedly either go up to an A or down to a C upon multiple viewings

Grade Rating if you ignore the script: A

Total grade rating (for now): A-