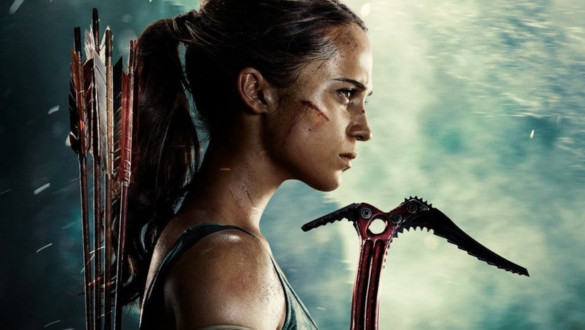 Synopsis: Lara Croft, the fiercely independent daughter of a missing adventurer, must push herself beyond her limits when she finds herself on the island where her father disappeared.

Ye of little faith, Warner Bros., opening the film with a stock shield and stock accompanying tune. It’s certainly jolting to hear that sliver of As Time Goes By again after a yearlong exhibit of logo variants—some total (King Arthur, Blade Runner 2049, It and Game Night), some partial (Wonder Woman, Dunkirk, and freaking Geostorm). Why the little fanfare and the bereft of embellishments? Geostorm gets to change its music but a film about a gaming icon gets zilch? There won’t be any self-indulgence here to use more pomp, it’ll just be properly reflecting the material’s built-in popularity. At the absolute least, it’s a sign that the studio believes its effort adapting a video game won’t be a(nother) wreck.

And that’s what Tomb Raider is: not a wreck. Not entirely—the script has some bumps—but what a joy it is to the adaptation outsmarting the subgenre’s “Four Horsemen” of straight-facedness, half-heartedness, lore-drunkenness, and plotting-the-plotlessness—and intermittently lighting up the screen with bona-fide cred of being a tentpole-scale adventure film.

Michael, we love you, but Mrs. Fassbender’s gaming prowess is unquestionably a league above yours. In Tomb Raider, Lara (Alicia Vikander) isn’t an archaeology graduate; she’s a youthful, free spirit who bike-delivers food around London at New York-minute pace. Other than this, players of the (thus far) two entries in Square Enix and Crystal Dynamics’ rebooted series about the adventurous vixen will recognize the borrowed gears. Lara’s father, Richard Croft (Dominic West), in his search for the world beyond has gone to Yamatai Island—the resting place of Sun Queen Himiko—and, well, gone. Although the world, including Lara’s guardian Ana (Kristin Scott Thomas), deems his dead, Lara refuses to; the guided discovery of her father’s secret hideout and Himiko-related documents give her room to hope. A plane flight, some skips, one sprint and a swing later, off Lara goes on her first adventure, not knowing she’ll collide with the artifact-hoarding mercenary group Trinity, its determined leader Mathias (Walton Goggins), and eventually the fabled Sun Queen herself.

In terms of porting the 2013 game to cineplexes, writers Geneva Robertson-Dworet and Alastair Siddons deftly walk the line between “staying true…”—essential character beats (first kill, splinter removal) and set pieces (plane-parachute, shipwreck) are intact—and “…but surprise!”—either through remixing (research vessel Endurance is now a corroding fishing boat) or relocating the aforementioneds, or streamlining (just one soul, Daniel Wu’s Haddock-like Lu Ren, is trapped on Yamatai with Lara). All that fan-servicing, however, has them deserting the game’s soul and finest selling point—watching the birth of a survivor. Right from the first scene, Vikander’s Lara is a near-total contrast to Camilla Luddington’s—in the boxing ring, amazingly toned, and born-crafty. The character remains empowering, but she’s now on a path of less-compelling evolution by starting off as a semi-badass rather than, quite literally, zero skill points. It’s unfathomable to see Tomb Raider not carrying over the game’s in-neon-signs emotional scaffold and lending a human touch to the emulation process.

That said, Vikander and director Roar Uthaug’s ability to entertain with as much octane as the film’s polygon-rich counterpart provides a great shelter for any flaw. Vikander charms as Lara, completely basking in the freedom of performing without being under pressures of the golden-statue kind. How nice it is to see The Man from U.N.C.L.E.’s Gaby Teller live on in Lara—crackling, funkily domineering and, when need be, affecting. And thanks to a presence that seamlessly unites seraphic and athletic, the actress magnifies the thrill when she passes or temporarily stumbles any of director Uthaug’s moments bombastic, or more bombastic, obstacles, all of which channel the visceral trait of those in the director’s last film, The Wave. No one-upping the game’s set pieces, though.

Notably, if one’s role on set isn’t leading, say protagonist or director, prepare to be sidelined by the writing in the last stretch. Victims are plenty—the editing rushes, the lensing feels off, and the music’s immutable aspect comes forth—though none are clearer than the trio of Wu, Goggins and Scott Thomas, capable actors who were given proper build up only to find their roles reduced to filler. It seems like the writers have given in to the committee’s request to prioritize “a great launch pad for a franchise” over “a great debut.”

But remember that sense of fun? Whenever Tomb Raider falters, it’s always there to provide cushion. Hopefully it can do so in real life, too, and influence box-office returns to where part two is confirmed, to where this surprisingly diverting rendition of Lara Croft can sprout truly and naturally—maybe even with enough force to be the first absolutely curse-free video-game adaptation. “As you think, so shall you become,” said Bruce Lee; get to work on a logo that will give Ms. Croft a future then, Warner Bros.!

Hear our podcast review on Episode 265.