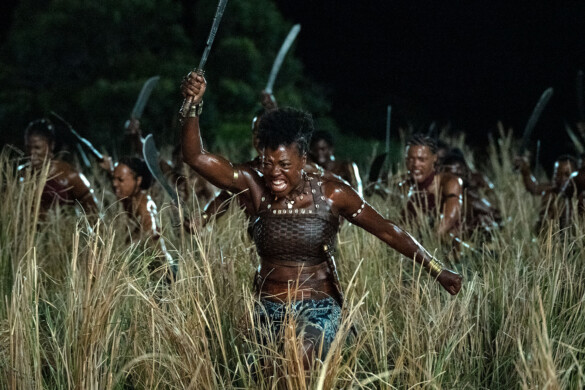 Synopis: A historical epic inspired by true events that took place in The Kingdom of Dahomey, one of the most powerful states of Africa in the 18th and 19th centuries.

Gina Prince-Bythewood’s historical-African epic is another 2022 blockbuster that deserves to be seen on the big screen. With impeccable costume design from Gersha Phillips, intense action sequences, and yet another powerhouse performance from Viola Davis. Set in the 18th century kingdom of Dahomey, The Woman King tells the story of the Kingsgaurd, an elite set of women soldiers who protect the kingdom from the warring Oyo Empire and the colonizers enabling their military might. Through the actions of General Nanisca (Davis), Izogie (Lashana Lynch), and the up and coming trainee Nawi (Thuso Mbedu), the Dahomey Kingdom may be able to break away from the slave trade and establish a stronger empire built on protecting all of its people.

Regardless of the historical accuracy of this film, its depiction of the Dahomey Kingdom is empowering in every way possible. The costuming, choreography, and cinematography highlight the scale of the Dahomeypeople and the importance of its culture. The Woman King is a vibrant film, with costumes that show off the wealth of African culture. Whether it is the Kingsgaurd’s uniforms or the royal garb, Phillips ’costume design is undeniably brilliant. Polly Morgan’s cinematography captures everything beautifully, with high contrast lighting that makes the dark scenes intimate, and the bright scenes gorgeous. The large dancing/chanting sequences come to life thanks to the cinematography that holds on to the action; the friendly challenges of strength are shot with an intensity that gives weight to the non-fatal stunts. Morgan’s camera work catches it all, the majesty of this large kingdom and the people who are within it flawlessly. That contrast is what propels this blockbuster story forward, and the aim to tell this alternative history with sincerity and care for its people rings throughout.

Empathy is clearly Gina Prince-Bythewood’s guiding philosophy for The Woman King, as she infuses each element of the film with said empathy. Whether it’s the showstopping performances of Viola Davis, Lashana Lynch, Thuso Mbedu, or the stellar editing which doesn’t glorify violence against Africans, or the depiction of an entire culture, Prince-Bythewood uses each element to empower these characters in their own fight against systemic racism. As mentioned, Davis is stellar in the role of the titular Woman King, Nanisca. She leans into the stalwart nature of this warrior general, and uses small facial changes to allow a glance into the inner turmoil of Nanisca. It’s powerful to watch, and firmly places her as a co-lead in this film. Alongside Davis is Mbedu, who captures the youthful fire of Nawi perfectly. Her dedication to the stunt work perfectly accompanies her more inquisitive performance, and it’s truly captivating. Lynch continues to amaze, in a supporting role that further shows her power as both an action star and a sincere individual. This trio of powerhouse performances is supported by an entire ensemble committed to depicting the amazing kingdom of Dahomey, and it’s a testament to the vision of Prince-Bythwood.

That vision also includes some of the best hand to hand combat sequences of the year. The editing is frenetic, and the geography can often fall away, but the fight is never not in perfect focus. Every strike, every musket blast, every jump, and every parry ring through the sound mix and leaves a mark on the audience. It’s maximum impact filmmaking in every sequence. But the empathy never leaves, the violence isn’t glorified, and every victory is a reminder of the losses sustained to reach that point. Terilyn A. Shropshire’s editing gives each battle a relentless tempo, and keeps you on the edge of your seat. The fight choreography is equally intense, and we witness each actress perform the choreography themselves for a majority of the film. It’s powerful and memorable.

The story by Dana Stevens and Maria Bello is compelling throughout, hitting the traditional beats of a historical action epic. Adding complexity to this is the film’s dual focus, as it tells the stories of Nanisca and Nawi in tandem. Nawi’s story of finding acceptance and becoming a fierce warrior is given added depth through her relationship to Nanisca, whose own past has come to haunt her. As these women take their place in the kingdom of Dahomey and assert their power, The Woman King truly takes on new meaning, and finds relevance in the modern era. That said, the romantic subplot of The Woman King leaves a lot to be desired. For a film that places emphasis on the Kingsguard not taking husbands, this subplot has a lot of potential to offer the film. And, at a few points, it leads to Nawi challenging this part of the Dahomey Culture. But it’s a subplot that is largely unresolved, leaving its potential unused, and creating a murky sub-set of themes that can weigh down the film’s greater discussion of female and African empowerment.