Movie Review: ‘The Shape of Water’ is a weird, but beautiful love story 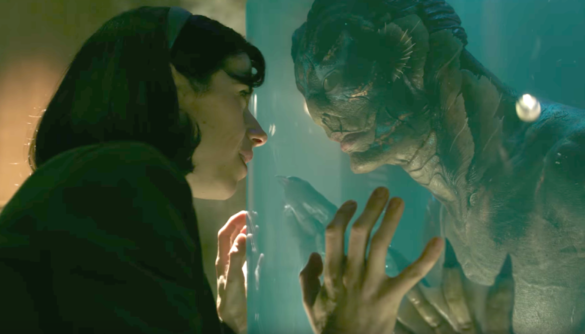 Synopsis: An other-worldly fairy tale, set against the backdrop of Cold War era America circa 1962. In the hidden high-security government laboratory where she works, Elisa’s life is changed forever when she and co-worker Zelda (Octavia Spencer) discover a secret classified experiment.

Guillermo del Toro is one of the most compelling directors working to date, and his latest film The Shape of Water is another great example of why he’s so revered among film fans. In fact, The Shape of Water could be del Toro’s best work since Pan’s Labyrinth back in 2006. There’s an aura of compassion and empathy poured into every scene that gives this film a striking pathos.

If you know del Toro’s sensibilities as a filmmaker, it will come as no surprise that The Shape of Water is another adult fairy-tale that fully embraces its fantasy from the opening frame. The opening sequence is very dream-like in its visual representation, with voiceover narration from Richard Jenkins that lays out the foundation for this fairy-tale – “the princess without voice” and “the monster who tried to end it all” he even says at one point. From the onset, del Toro is playing in a cinematic playground that he thrives in and it’s beautifully alluring on every level.

The film is centered on a mute woman named Elisa (Sally Hawkins), who works as a cleaning hand at a secret government facility. Her work is mundane, but she has her best friend Zelda (Octavia Spencer), who talks constantly, to keep her company. One day she finds out that this facility is housing a creature of some sort, with human-like qualities, and she immediately has empathy for him. She starts bringing him food, she plays music for him and even teaches him some sign language. Scientist Dr. Robert Hoffstetler catches wind of this and is intrigued by the humanity of it, but there are Cold War implications to having this creature around, and this puts science and Elisa’s newly formed relationship on the back-burner.

The central plot plays out like a 50’s noir, also giving The Shape of Water a captivating dramatic urgency. There’s an escape attempt, Russians may or may not be involved and there’s an investigation that threatens Elisa and everyone around her. Michael Shannon gives an invigorating performance that re-energizes the film whenever he’s on screen. He chews on del Toro’s dialogue in ways that make you love to hate him.

While The Shape of Water has del Toro’s signature fingerprint all over it, there’s something about its dream-like quality, the film’s use of magical realism, Alexandre Desplat’s mesmerizing score and the lingering pathos revolving around its central romance that makes this experience singular and unique among del Toro’s other works. Del Toro wonderfully establishes his usual aesthetic and darker undertones, while fully embracing the film’s sexuality and passion. That is to say, The Shape of Water is endearing and surreal in its romance, similar to something like La La Land, but it also has fun playing with its bizarre premise – à la Crimson Peak.

As a result, yeah, the film is a bit weird in places, but that’s what makes it so charming and enjoyable. That, and Sally Hawkins. Her performance, along with del Toro’s vigorous direction, overcome any potential pitfalls that could come with this territory. Without saying a word, Hawkins conveys visceral loneliness and empathy. Her chemistry with Doug Jones – who plays the amphibious man creature – is also great in making the romance come alive.

Dan Lausten’s cinematography, coupled with del Toro’s vision for this film, is astounding and renders some breathtaking imagery at times. The use of green hues are visually appropriate given this story, but thematically it also adds nuance to these characters and how they deal with loneliness throughout the film.

The Shape of Water is no doubt one of del Toro’s best films yet. It’s a film that isn’t afraid to be transparent in its romance – there is vivid nudity at times which will be awkward for some audiences – and it takes full advantage of what this world has to offer. The characters are endlessly enjoyable thanks to a great ensemble cast that doesn’t feature any weak link. It has one of the best scores of the year, and the music overall is a major driving force. The Shape of Water is a rich and satisfying experience that I cannot recommend enough.

Hear our podcast review on Episode 250: