Movie Review: ‘The Other Side of the Wind’ is a jumbled film that parallels the life of Orson Welles himself 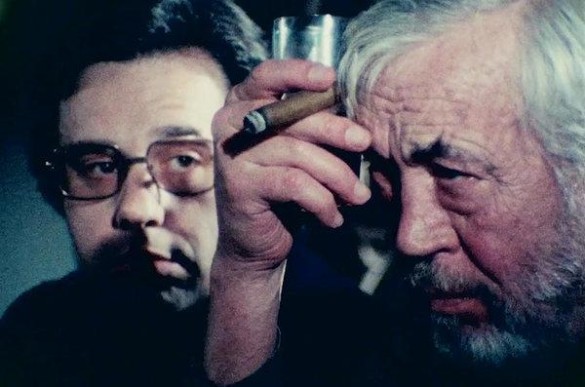 Synopsis: A Hollywood director emerges from semi-exile with plans to complete work on an innovative motion picture.

It is to be expected that a film which took over 40 years to make and was completed by multiple collaborators after the director’s death would be somewhat jumbled. But The Other Side of the Wind takes the word “jumbled” and goes far beyond. Were it not for the name of the fabled director, I might have written the film off early on. But the director of this film is of course the late Orson Welles and, as such, I can’t help but wonder if the jumbled mess is somehow intentional.

The film’s plot focuses on a fictional director named Jake Hannaford (played by John Huston – arguably the only person from film history who embodied the phrase “larger than life” more than Welles). Hannaford is a legendary relic from Hollywood history who has left America and now returned to create his masterpiece. If that sounds blatantly self-referential to Welles’s own life…well, that’s because it clearly is. Despite the fact that Welles denied this (his response to claims that the film was autobiographical can be seen in Netlix’s companion documentary They’ll Love Me When I’m Dead), one simply cannot deny the clear parallels between Welles and Hannaford. Welles, too, saw massive success before and during Hollywood’s Golden Age, only to be ground down by the studio system leaving us all to wonder what might have been. Welles himself left America to make some of his most critically-acclaimed post-Citizen Kane films. He then returned and painstakingly tried to finish his final film. Production began on The Other Side of the Wind in 1970, but Welles was never able to complete the film in his lifetime. He died in 1985.

The hype surrounding this film for cinephiles is almost too much to express. How often do you get the chance to see a new film from one of the greatest directors in movie history more than 30 years after his death? The fact that this film was finally completed and released is an astronomical achievement, and we should all thank Netflix for making such an incredible movie going experience a reality (even if they should release their films in theaters – but that’s a discussion for another time).

Having said all that, judging the film on its own merits, I don’t think The Other Side of the Wind really works.

The “movie within a movie” conceit is one that gives unique opportunities to consider the art of moviemaking itself. Think of Singin’ in the Rain, for instance. Here, I didn’t find the film to be in awe of the moviemaking experience, however. It seemed to be much more pessimistic in tone – focusing on all the people involved in making a film that can detract and damage it in some way. This is why I ultimately wonder whether the jumbled nature of the film was an artistic choice. Is this Welles’s way of showing us what the studio system did to his creative star power?

Even if that is the case, there simply aren’t enough character elements here for us to buy in to such a convoluted plot. I am of the mind that character comes before plot every time, so I’m willing to accept a film that is light on plot if the character elements still allow me a way into the story (I think Terrence Malick’s The Tree of Life is a good example of that). Here, I never really felt like I knew what was going on. I was confused and, ultimately, disinterested for much of the film. The technical components and visual elements are obviously well done. This is an Orson Welles film. But it left me wishing that things could have been different. Again, maybe that’s the point.

Hannaford repeatedly attempts to show his uncompleted film (also titled The Other Side of the Wind) to an audience, though technical issues continually thwart these attempts. There’s some really interesting commentary in there about the process of filmmaking and the physical components of films themselves. It reminded me of the sequences in Ingmar Bergman’s Persona where the film begins to burn and break apart. Though people put all their creative force into these films, they are fallible and temporary. Films can convey so much, and yet they are fleeting in some sense. Almost like a gust of wind.

It is clear to me that this film is the work of a man who had been beaten down creatively. He had given his whole life to the film industry, and I wonder how he felt about what he received in return. Many say that he created the greatest film ever made. It was his very first film. After that, his life amounted to living within his own shadow. Again, it is impossible not to draw parallels to this film.

I think this is a film that is worth seeing, even if only for its historical importance. (Though you should know that this is surely not a film for young audiences, with its large amounts of graphic nudity.) But the experience of watching it left me with a palpable sense of sadness. Sadness about the film itself, but an even deeper sadness about what became of Orson Welles.

John Huston Netflix Orson Welles The Other Side of the Wind