Movie Review: ‘The Northman’ is a Tale About the Everlasting Succession of Barbarity 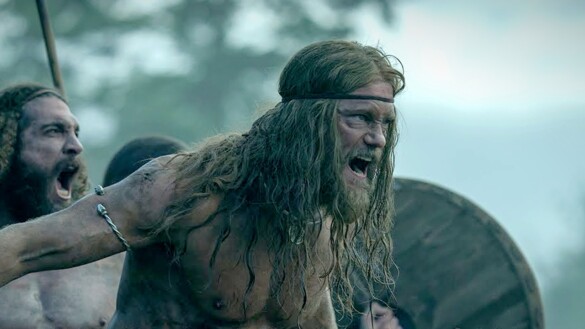 Synopsis: From visionary director Robert Eggers comes The Northman, an action-filled epic that follows a young Viking prince on his quest to avenge his father’s murder.

Although he doesn’t have many films under his belt, three at this point, Robert Eggers has established himself as one of the most unique and distinctive voices of this new generation of filmmakers (along with Julia Ducournau, Ari Aster, Anna Biller, amongst others). His features use a motley mixture of symbolic imagery and stalking horror along with the faithful periodic details (including dialect, costumes, and richly layered folk-tale narratives) to create terrifying and memorable pieces. One of the reasons his films are so compelling and alluring may be his obsession with research–he peruses and scrutinizes various texts, lexicons, and dissertations of the era, along with scriptures of actual lived experiences. Eggers quotes: “If I can’t experience what I write as my own memories, it can’t be truthful.” This fixation benefits his features, as he brings the historical worldviews of a lost time to modern audiences in artistically bewitching and atmospheric ways. I even consider his debut, The Witch, to be close to being a masterpiece.

It creates a thick atmosphere of dread and conveys the themes of blind religious convictions, unlike any picture I have seen in the past decades. I’m not the biggest fan of his follow-up, The Lighthouse; however, I admire most of its cinematic minutiae, artistic corpus, and concepts. Now, for his third project, he partners up with Icelandic author and screenwriter Sjón (who also, fun fact, has performed with Björk and The Sugarcubes as Johnny Triumph) to deliver an interpretation of the legend of Amleth, who’s a preeminent figure in medieval Scandinavian mythology. The Northman centers around the prominent figure (Alexander Skarsgård), the direct inspiration of the character Prince Hamlet, who was once set to govern the kingdom his father, King Aurvandill War-Raven (Ethan Hawke), oversaw and reigned over. After a fierce battle, the King and his kin embrace and celebrate throughout the evening. Once the nighttime arrives, the two go to a forest close by to perform a rite, with the help of the fool Heimir (Willem Dafoe), that will bond the father-son relationship into something worth more, an affinity between kings.

There is only one primordial condition to this ritual between the fire: if the worst tends to happen and the King perishes amidst battle, Amleth must avenge his death. And the worst indeed occurs when his father is pitilessly murdered by his uncle, Fjölnir (Claes Bang). And his mother, Queen Gudrún (Nicole Kidman), was kidnapped by the same people who performed the ruthless act. From that point on, he escapes on a rowboat out to sea and swears: “I will avenge you, Father. I will save you, Mother. I will kill you, Fjölnir.” Two decades later, Amleth–now a Viking who raids several Slavic villages–receives a vision from a seeress (Björk, with a brief yet fascinating scene). She reminds him of his oath to the gods about exacting retribution for his royal progenitors. Because an act of violence and callousness reminds him of what happened to him, he conceals himself as a slave in a ship headed towards his false-hearted uncle’s new estate; Fjölnir’s perfidious act led to complete dismissal and exile.

As they make their way to the new domain, Amleth meets and romantically bonds with Olga (Anya Taylor-Joy), a young sorceress who is willing to help him pursue retribution. In the estate, Amleth builds trust with Fjölnir and his loyal companions so that, when the time is right, he can strike his mighty sword against him and get vindication for his family name. Beautifully and carefully crafted by Eggers and company, The Northman takes the Norse myth that inspired Hamlet and makes it into a mesmerizingly ambitious and brutal revenge tale. Although there is a large kill count and garners its plentiful buckets of crimson red splattered around the muddy terrains, the film is about the tolls savagery takes on a person’s life choices and vitality–a nihilistic account of the everlasting succession of barbarity and brutality. There are several scenes in which Amleth rethinks his actions due to the visceral carnage caused by his influence (as he ransacks villages) or by others (the killings of his own people).

This then juxtaposes with the moralities and principles of the different types of people we see throughout the film: Vikings, kings, queens, sorceresses, ordinary folk, and the enslaved. This is a theme that comes back from Eggers’ previous features; however, in this case, it isn’t about religious convictions or the edges of sanity, but the cycle of violence. There’s also the dissimilitude between the male and female characters. Regarding the male characters, Eggers is fascinated by portraying the human body in all its ugliness (even though Skarsgård delivers a muscular berserker performance, harnessing the spirit of an apex predator while showcasing his washboard abs). There’s burping and farting (like Pattinson and Dafoe’s drunken ramblings in The Lighthouse) as the signs of manhood and bonding between the men. Yet, at the same time, we see their bodies abused and defiled as if humanity is meant to suffer for eternity. This helps to make The Northman not only a compelling watch but a challenging and hurting one as well (in a good way, of course). You can sense the physicality of the sword swings or the punches thrown during the fights.

On the other side of things, the women (and womanhood) are treated esoterically or mystical-esque–almost sacred. However, the movie doesn’t expand upon these characteristics as much as one would like to. However, thanks to Kidman and Taylor-Joy’s acting chops, this flaw is overcome mostly, but not completely. The other minor issues that the film contains have to do with its final emotional pull and its cold demeanor. Like most Shakespearian play adaptations or other similar works, there will be many who already know the grand scheme of things (not the brilliant final battle but its conclusion). That wasn’t the problem; the problem was that its ending overall isn’t as emotionally enthralling as one might expect, nor does it reach the thematic richness of The Witch’s finale. When compared, it feels a bit smaller. Nonetheless, you are in awe of Eggers’ directorial abilities, most specifically because this is a grander scope, with a budget of 75 million dollars (thanks to Focus Features for giving such an innovative auteur a big bag of cash to realize his visions).

Most of The Northman’s elements are exquisitely detailed (the costume design by Linda Muir and Louise Cassettari, Craig Lathrop’s production design, and the entire sound team) to take you back to the bestial 10th century. In addition, the work of cinematographer Jarin Blaschke is pretty darn good. The way he shoots the film’s action set pieces is outstanding. He lets them breathe and develop slowly with tracking shots so the viewer can be way more immersed in the story. Blaschke also isn’t afraid to let the camera linger in front of the actor’s faces so we can sense every emotion the characters are going through. There is a lot to admire in Eggers’ latest, and it’s possible that, with a rewatch, you could appreciate the details more and analyze the themes in-depth. The reflections of the cycles of violence passed down from generation to generation is a fascinating concept, and Eggers finds a way to balance feral entertainment with simplistic scenes of dramatic heft. The studio interference comments that appeared a few days ago don’t seem like much happened; it doesn’t appear to have narrowed his vision, as it has his stamp all over the 137-minute runtime. By the time the end credits hit, you will be waiting for it to begin anew, and that is one of the highest compliments you could give a movie of this size and breadth.