Movie Review: Between brownface and preachiness, ‘The Laundromat’ is a low point for Soderbergh 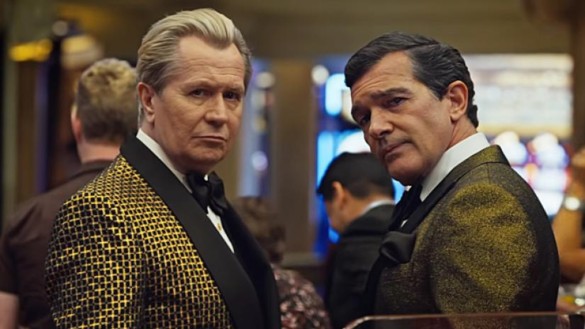 Synopsis: In this The Big Short (2015)-esque dramedy based on the Mossack Fonseca scandal, a cast of characters investigate an insurance fraud, chasing leads to a pair of a flamboyant Panama City law partners exploiting the world’s financial system.

I’ve never seen a Steven Soderbergh film that wasn’t fun. When I see his name attached to a film, “fun” is the first word that comes to mind. Whether it’s the story, the pacing, or the memorable characters, his films always have an energetic quality to them.

While that streak didn’t end for me when I watched The Laundromat, Soderbergh’s latest film on Netflix, this was by far the least amount of fun I’ve ever had watching one of his films.

This film tells the nefarious story of shell companies – the fake business entities used by the wealthy to dodge taxes and legal ramifications for their greedy dealings. It stars Gary Oldman and Antonio Banderas as Jurgen Mossack and Ramon Fonseca – the lawyers behind what was once the world’s fourth largest provider of offshore financial services. This is the true story of the scandal uncovered by the Panama Papers, though Soderbergh certainly takes his liberties.

Meryl Streep plays the other lead role, as Ellen Martin. The film begins with her and her husband, Joe (James Cromwell), on vacation. Joe dies in a boating accident, and the difficulty with the insurance company is what sets off the uncovering of all the seedy financial dealings. Along the way, there is a third story about one of the wealthy men who is connected to Mossack Fonseca. He cheats on his wife with his daughter’s roommate.

If it all sounds a little disjointed, that’s because it is. I forgot to mention that Mossack and Fonseca narrate much of the film, breaking into whatever narrative is currently at play. The film’s early scenes work much better than its later ones – when Soderbergh completely gives the story over to a preachy cautionary tale.

People will compare this to the recent films of Adam McKay, especially Vice. While there are similarities, at least McKay keeps most of the focus on the narrative. Soderbergh just can’t help himself – he knows something that we don’t and he’s going to tell us whether it comes off as preachy or not.

Then you have the major controversy around Meryl Streep in brownface. Yes, in 2019, this really happened. The film’s closing scene makes an attempt to show the move as one of being part of the film’s artifice, but I’m not buying that and neither should you. Along with her role as Ellen Martin, Streep also plays a Latina secretary at Mossack Fonseca. It’s offensive, and completely unnecessary.

From the names I’ve already mentioned, you can clearly see that the film has an incredible cast. It also contains Sharon Stone, Jeffrey Wright, and David Schwimmer among others. They, along with Soderbergh’s usual technical skill, keep the film from being a total disaster.

Having said all that, I must admit that some of that old Soderbergh fun does seep through. The man is a living legend, and for good reason. He brings some of his technical mastery and visual flair to this film as well. Especially in the early scenes, I was along for the ride. The problem is that the ride comes to a screeching halt as the film progresses.

If you’re looking for a high-quality Soderbergh film released by Netflix in 2019, you’re better off with High Flying Bird. In that film, Soderbergh had an equally-fascinating story to work with but he let his characters do the talking. Here, the direct-to-camera narration just gets old by the end of the film.

Preachy is a bad look for most artists. I enjoyed Vice more than most, but even I had to admit that McKay’s thirst to tell everyone how stupid they were while Dick Cheney ruled the world detracted a bit from the experience of watching the film. Here, the preachiness sours the entire experience and squanders the fun Soderbergh narrative I thought I was getting when I began watching.

Hear our podcast review on Episode 347: