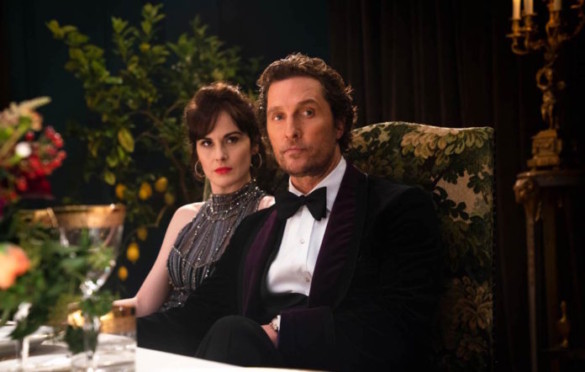 Synopsis: An American expat tries to sell off his highly profitable marijuana empire in London, triggering plots, schemes, bribery and blackmail in an attempt to steal his domain out from under him.

Guy Ritchie is known for his witty, fast-paced, slightly offensive, perfectly casted crime films. His movies aren’t everyone’s cup of tea, but he’s one of my favorite directors. His latest film, The Gentlemen, reminds fans exactly why we enjoy his movies. The Gentlemen tells the story of American marijuana mogul in London, Mickey Pearson (Matthew McConaughey), who’s trying to sell off his lucrative business so he can retire to a quiet family life with his wife (Michelle Dockery). In true Guy Ritchie fashion, things go awry, and problems must be solved. He then goes on to fill two hours with chase scenes, lots of violence and bad language, and as many British accents as possible.

I am a fan of Guy Ritchie, so I really enjoyed The Gentlemen. I love the entire cast; Ritchie is talented at finding the perfect group of people to be in his movies. Hugh Grant was particularly good as the film’s unreliable narrator. His drunken character awkwardly hitting on Charlie Hunnam while explaining what he thought was going on was funny and kept the film moving. Charlie Hunnam was also great as McConaughey’s right hand man, Raymond. I know he’s English, but I know him best from Sons of Anarchy so it’s still weird to hear him with a British Accent. Colin Farrell was also good as side character Coach. It was nice to see him in a good movie and with (I think) an Irish accent. Michelle Dockery was also fabulous as the films only female lead, Rosalind. I’ve only seen her as Lady Mary in Downton Abbey, so it was a big change to see her with a cockney accent in 4.5” Loubitons ordering people around and having the best line in the entire movie – There’s f*#kery afoot…”

The Gentlemen has a lot going for it. It was the same kind of complicated story Guy Ritchie is known for- many things happening at once, all storylines converge, things are revealed at the end- but it felt like it was done at a slower, more easy to follow pace than some of his previous films. It seemed more refined, maybe that’s why he called it The Gentlemen? It was also very funny. There were little things happening at all times to remind the audience to laugh in between the horrible language and violence. He also managed to stick in a large The Man From U.N.C.L.E poster in the background of one scene. That’s a seriously underrated Ritchie film (that I love) whose fans are usually found begging for a sequel online. Another thing about the movie I enjoyed was seeing actors in roles I’m not used to seeing them in. I know Hugh Grant and Henry Golding from Romantic Comedies. In The Gentlemen Golding is the villain and Grant is a sleazy journalist. Charlie Hunnam is (mostly) cool and collected and not the leading man.

As far as negatives go, The Gentlemen has a few. It’s filled with very profane language which can be offensive if you’re not familiar with Ritchie’s films or don’t enjoy hearing words that qualify an R-rating 174 times in two hours. There’s also only ONE female character in the entire movie. I understand it’s a crime movie and Guy Ritchie isn’t known for having a ton of women in his films, but I think it’s time he started writing parts for women. I love his quick-paced, snarky back-and-forth dialogues and I can think of a dozen actresses that would thrive in one of his films. Fingers crossed he’s a bit more inclusive next time. Additionally, the one female character owns a garage with only female mechanics. This comes off a bit “teenage boy fantasy”, hot women draped over expensive cars, and is labeled “a haven for the ladies” in the film. I didn’t personally think of it that way when I saw it, but others did. For me, a female living in the US, who has owned many cars, it was something I wish was a real thing. I’ve lost track at the number of times I’ve been talked down to, questioned, mocked, or hit on any time I’ve taken my car to get inspected or something. None of these “negatives” really bothered me, I knew what to expect with this director, but I know not everyone will feel the same.

The Gentlemen is a classic Guy Ritchie crime flick. It combines everything we know and love from him while sprinkling in some new faces and weaving his complicated storyline at a slightly slower pace. It’s definitely not for everyone, but fans of his previous movies with probably enjoy it. It’s a lot of fun and I highly recommend seeing it on the big screen.

Hear our podcast review on Episode 362: