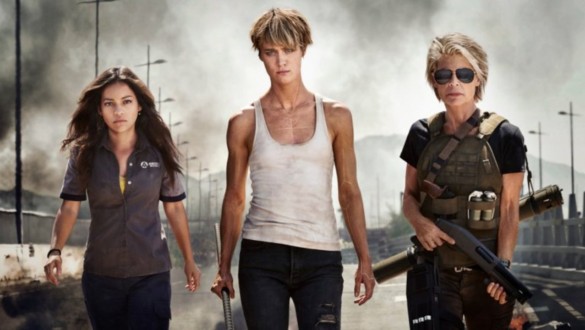 Synopsis: Sarah Connor and a hybrid cyborg human must protect a young girl from a newly modified liquid Terminator from the future.

Another installment of The Terminator franchise hit theaters this month. Terminator: Dark Fate trailers have been running for some time and the big selling point on this release has been the return of Linda Hamilton as Sarah Connor as well as Arnold Schwarzenegger as an aged T-800 named Carl…thats right. If I am being honest after the letdowns of Rise of the Machines, Salvation and Gensisys my fatigue over the Terminator series just would not let me get that excited over Dark Fate, even with these names attached. In fact, internally I was mentally preparing for disappointment. Even with Tim Miller, who actually surprised me with Deadpool (I absolutely hated the trailer), helming I had very little faith in what this film could achieve and wasn’t even certain if I planned on catching it in theaters. But one uneventful day with very little to do a buddy convinced me to give it a go. And roughly 2 hours later I was able to say with certainty that Terminator: Dark Fate had finally breathed some long-awaited life back into the franchise.

Warning: There will be spoilers in this review.

Let us get things straight, Terminator: Dark Fate is by no means a slam dunk. It has many of the same flaws one might expect from a sequel to a badly aging franchise, but it does manage to get the basics right and deliver an entertaining film. For starters the film immediately separates itself from the prior installments by means of an alternate timeline, something I usually find cheap and tiresome but in this circumstance, I will take it. The film picks up after Terminator: Judgement Day and creates a new story arc where years later John Connor, the future savior of all mankind, dies at the hands of a T-800. This is obviously big considering up until this point every single film in the franchise dealt in someway around Skynet sending machines to stop John Connor from becoming their ruin and mankind’s champion. Instead, an artificial intelligence called Legion, Skynet no longer exists in this timeline, has sent back a new model of Terminator, the REV-9, to hunt and kill a seemingly insignificant civilian named Dani Ramos (Natalia Reyes). Of course, as always, we find there is nothing insignificant about Dani at all and we learn that in this future she leads a rebellion to rise up and fight against the machines. In essence, she has replaced John Connor as the central figure to humanity’s survival. Much like the original film humanity’s response is to send back a soldier to protect Dani and mankind’s future. But in this installment the soldier, Grace, played by Mackenzie Davis, has an advantage: she is part machine with enhanced strength, reflexes and conditioning. Overall Dark Fate‘s storyline is very much a mirror of the original 1984 film which sounds bad but may be exactly what the franchise needed, a fresh start. It also makes for easy viewing being that most people watching will already be familiar with the original film. Leaving the story less complex allows viewers to settle into the film and just enjoy the action and excitement without having to overthink the storyline.

Speaking of action, Dark Fate has plenty and it is all done well. The film eases in with some brief character introductions but it wastes no time getting to the explosions and car chases and once it starts it never really stops. The story and everyone’s place in it you learn along the way in-between chase sequences, plenty of shooting and lots of machine on machine brawling. Miller really brings it here and the truth is this is what most viewers will have come to watch. The dust-ups between Grace, the T-800, reprised by Arnold Schwarzenegger, and the REV-9 (Gabriel Luna) bring loads of hard-hitting action and are just fun to watch. Like previous films, each iteration of Terminator seems to have some new trick and the REV-9 is no exception. Like the T-1000 it has a liquid metal form but this sits on top of a metal endoskeleton, very much like the T-800’s. This is clever but the real trick is that the endoskeleton and liquid form can function separately and apart, so at times Grace and team are dealing with two terminators. The REV-9 makes for a formidable opponent even with the T-800 and Grace’s combined force. They are truly no match for it and the fight sequences keep reminding you of this. It adds a layer of suspense to the film and most encounters are them simply trying to slow the REV-9 down and put distance between them and it. Conceptually it is a great homage to that classic line from the original, “It can’t be bargained with. It can’t be reasoned with. It doesn’t feel pity, or remorse, or fear. And it absolutely will not stop, ever, until you are dead.” This is really what The Terminator was about and yet most of the sequels failed to capture it.

Terminator: Dark Fate will not by any means blow you away but what it will do is rekindle some of that lost enthusiasm you had when you first watched The Terminator and Judgement Day. Seeing Hamilton and Schwarzenegger on-screen together again definitely helps but the story is good as well. Everyone delivers performance-wise and the action will keep you awake so you won’t find yourself bored and staring at the exits wondering when it is all going to end. My main complaint really has nothing to do with the film’s execution but more to do with its existence. Even though I enjoyed Dark Fate I definitely question whether it really needed to have been written and this is more emphasized after recently learning that this may be the first in a trilogy. After enduring the horrendous sequels after Terminator: Judgement Day I really want to root for the series but at the same time I also feel like it should come to its timely end and I was hoping this would be that. In a time where theaters are full of sequels, prequels and remakes there is a huge lack of creativity and inspiration lingering and all of this can at times feel more like cash grabs instead of true art and storytelling. And more importantly, these films often cheapen the classic that many cinephiles hold dearly. Where Dark Fate stands in all of this is hard to say however I what I can say is that I can definitely recommend a viewing. As an action film it delivers and fans of the franchise won’t be disappointed and also seeing Sarah Connor team up with a T-800 is a treat. However, that being said I still worry about the future of the series and it is likely dead in the water.