Movie Review: ‘Sword of Trust’ slices through conspiracy culture with humor and insight 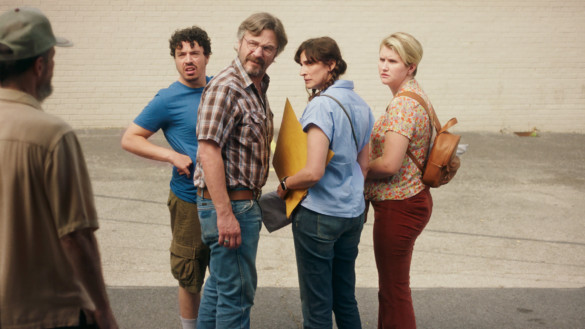 Synopsis: Cynthia and Mary show up to collect Cynthia’s inheritance from her deceased grandfather, but the only item she receives is an antique sword that was believed by her grandfather to be proof that the South won the Civil War.

You’re either a pessimist or an optimist. It’s one of the many labels we place on each other. As with most ways of labeling people, things are often much more nuanced than that. Yes, we may each have a clear leaning towards either pessimism or optimism, but we also often find ourselves in the opposite category from time to time.

Sword of Trust is a film about how both pessimism and optimism can be twisted.

Mel (Marc Maron) is the owner of a pawn shop in Alabama. He’s a normal guy. Yes, he may try to pull a fast one on the customers that come in, but that comes with the territory. His biggest problem is trying to get his employee Nathaniel (Jon Bass) to work rather than watch videos online.

The other main characters are Cynthia (Jillian Bell) and her wife Mary (Michaela Watkins). We learn that Cynthia’s grandfather has recently passed away, and he left Cynthia a Civil War-era sword that brings the couple to Mel’s pawn shop. But the sword wasn’t the only thing that Cynthia’s grandfather left her. Along with the relic is a discombobulated letter claiming that the sword is proof that the South actually won the Civil War. When Cynthia and Mary share this story with him, Mel is not convinced and his offer shows it. However, he quickly finds out that there is a small and very racist group of collectors who will pay incredible amounts of money for “artifacts” like this one. So, he calls them back to work together on a sale and the film’s main plot begins to take place.

Even as it touches on difficult subjects like vile racism and dependency on drugs, Sword of Trust is hilarious throughout. Director Lynn Shelton co-wrote the screenplay with Michael Patrick O’Brien, and I found it to be very funny. Much of the humor comes from this ludicrous situation in which the characters find themselves, but the cast does a wonderful job of mining it for laughs.

But it’s not just a surface-level film either. This film attempts to go deeper and touch on themes that are important to our culture right now – namely how easy it is to be caught up in conspiracy theories and false narratives online. Our main characters don’t even believe this Civil War conspiracy theory, and yet they are caught up in it for financial gain. The parallels with social media and the monetization of online rage should be clear by this point.

But then there are moments when our characters do believe things that are…well…suspect. One example is when Nathaniel explains to Cynthia why the earth is clearly flat. I thought the film did an incredible job of showing how well-meaning people can get caught up in scams and false narratives. It goes back to optimism vs. pessimism. I’m an optimist at heart. As I’ve gotten older, I’ve learned that you have to be a little more discerning as you get out into the world. Blindly seeing the good in everyone can lead you into situations where you get taken advantage of. However, there’s something about seeing the good in everyone that I never want to lose.

And here is where the film does a good job of showing the flip side of that coin. By falling deeper and deeper into pessimism, you can overlook the good in people – especially those closest to you. This is shown through the relationship between Mel and Deirdre (played by Shelton).

We meet Deirdre early on in the film, and it is clear that she has some kind of long-standing relationship with Mel. We might assume that it is romantic in nature, but that isn’t clear. All that is clear is that she has come to Mel for a loan and it is obviously not the first time this has happened. Mel turns her away, and it is clear that it pains him to do so. He just feels that he simply cannot keep enabling her. Again, it isn’t clear at this point, but we assume that Deirdre has a drug problem.

I enjoy when films set things up without filling us in on every last detail. We’re sort of left wondering about that relationship, and we aren’t given any details about it until a moving scene late in the film when Mel explains their entire history. Again, I like when films keep us guessing early on, but given how the film ends (which I won’t spoil here), I think it needed to do a better job of setting up the Mel/Deirdre relationship. I feel like it was so close to nailing this tonal shift and narrative tightrope, but it just didn’t quite work completely for me. While it wasn’t enough to keep me from enjoying the film, I also think it didn’t quite earn the ending it chooses. Still, I have to commend the team behind the film for the ambition they showed in going for something a little deeper.

What this relationship does accomplish in the film’s narrative is to show us how pessimism can give way to overlooking the good in the people we love. Yes, Deirdre has taken advantage of Mel in the past. Yes, there is some point at which even the people we love shouldn’t be allowed to continually take advantage of us. And yet, the question clearly remains in Mel’s mind of whether he should have given her another chance or not.

I really enjoyed this film on multiple levels. It is so funny, and it also got me thinking about our culture and the ways that false narratives travel. On even another level, this is a film about our relationships and how we can take advantage of one another and how that can lead us to worry too much about being taken advantage of. This is a good little film. It may not quite stick the landing, but the setup is so good that the overall experience remains intact. The story, direction and performances all support what is a really strong film.