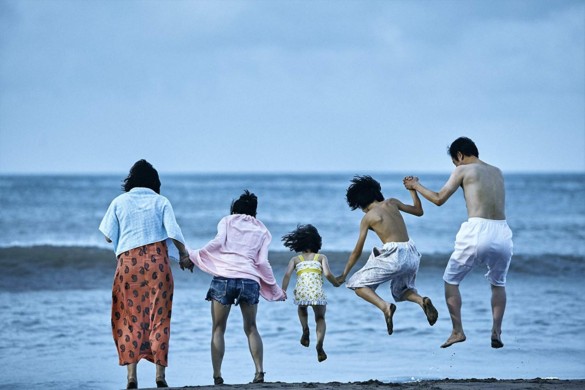 Synopsis: A family of small-time crooks take in a child they find outside in the cold.

Nobuyo’s challenging question forces us to reconsider our predetermined definition of family, and serves as the thematic through-line for Hirokazu Koreeda’s latest drama, the Palme d’or winning Shoplifters.  Following a poverty-stricken Tokyo family, who must resort to shoplifting just to gain the most minimal form of nourishment, they take in (or, steal?) a scarred 5-year-old girl left in the cold in front of her own home.  That plot synopsis might make Shoplifters sound more like a “movie”, but for those familiar with Hirokazu Koreeda’s best work (After Life, Nobody Knows, Still Walking, and Like Father, Like Son), the film nevertheless still continues his tradition at subtly deconstructing our perceptions of what defines a family, possibly in his best and most open-minded ways yet.  If anyone commits the biggest theft here, it’s arguably Koreeda himself, as Shoplifters has a way of sneaking up on you like a thief in a supermarket.

Despite its grander premise, Shoplifters is very much a Hirokazu Koreeda film, favoring stillness over melodrama.  There’s a natural tranquility to Koreeda’s films, making his work feel like casual experiences, forcing those to dwell in what’s devastatingly familiar.  In Shoplifters, thievery and poverty come off like second-nature for this family, as if none of this is new for any of them; there’s a longevity in their hardships, a tragic history which we never see for ourselves, heightening the film’s saddening interior by keeping things momentary and within a specific fragment of time.  We are introduced to this family during a playfully choreographed act of shoplifting by father-figure Osamu (Lily Franky) and his little boy Shota (Jyo Kairi), followed by a comically written dinner with the rest of the household, including mother-figure Nobuyo (Sakura Andô, who gives one of the year’s best supporting actress performances), oldest child Aki (Mayu Matsuoka), and their pension-providing grandmother Hatsue (Kirin Kiki), who has her own separate familial past that makes for an interesting dichotomy with the rest of this household.  There’s no exposition, but each of these actors give their respective characters their own distinctions that Koreeda wants us to observe; he loves making his audience feel like flies on a wall, and for those willing to give in to its calmness, you’ll probably love it too.

From there, very little conflict occurs at the macro level, even after taking in young Yuri (Miyu Sasaki) from the cold.  This family’s introduction is deliberately right in the middle of their hardships without any setup, with the rest of the film spent observing this household gradually behave more like a family with each passing day.  Many examples of this are sprinkled through the film like a series of vignettes; Shota and Yuri go on their own exciting adventures through Tokyo together (even questionably teaching her how to shoplift with them), Aki morally struggles over her source of income, and Osamu and Nobuyo gradually redefine their roles as “parents”.  In the process, Shota slowly transitions from selfish child to big brother, Osamu and Nobuyo become more intimate with one another (a great moment of such intimacy is first met with confusion, as if this is an act of sexual awakening for each of them), and Aki wrestles with the choice she has made to live with this particular family despite another life she may have.

And that’s the key word in all of this; choice.  I will not dare reveal the specifics, but Shoplifters crystalizes with a revelation that recontextualizes the film’s definition of family, whether a family by choice is perhaps more of a family than those by blood.  But Koreeda relishes in the questions instead of the answers; were these familial bonds on display in fact genuine, does a loving relationship surpass growing up in a stable environment, and was it right to bring a young girl like Yuri into a family of thieves?  We trust the love and affection these people share with one another, but we also feel fooled in their familial believability, and the point is to sense that tug of war.  A pivotal scene burning Yuri’s old clothes serves as this moral turning point, not just for all these characters, but in Yuri’s informal adoption into this family; we are moved by their acceptance in one another, while simultaneously questioning if we should be moved by it at all.  And this is the mark of a great film, when you find yourself questioning notions that the film may not even be directly asking you, but Koreeda gives you permission to look for them.

As we circle back to Nobuyo’s aforementioned question, does giving birth in fact automatically make you a mother? To put it more generally, as a family by choice over lineage, does that make these bonds any less familial? Koreeda seems to think not, but he’s not trying to forcibly convince you of that.  In one scene, grandma Hatsue agrees that you usually can’t choose your own parents, to which Nobuyo answers by saying, “Maybe the bond is stronger when you choose them yourself.”  It may sound like Nobuyo has just answered her own questioned, but the key word there is “maybe”, and that uncertainty matters.

Not since Satyajit Ray introduced us to the world of Apu in Pather Panchali back in 1955 have we seen such cultural specificity on economic hardship and family, with an emotional calmness that feels heavily inspired by the Ghibli roots of Isao Takahata.  I’m not going to generically say that the film stole (ahem, shoplifted) my heart, but it gave me something in return – an additional outlook on familial relations.  The best movies teach you something you may not have already considered, and Shoplifters might do just that for many people, especially families. Embrace it.

Hear our podcast review on Episode 302: