Movie Review: ‘See You Then’ is an Honest and Authentic Look at Transitioning 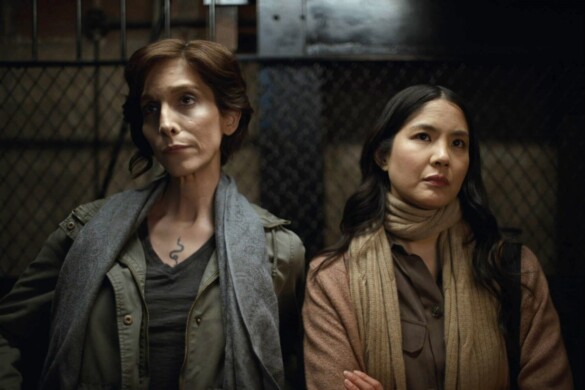 Synopsis: A decade after breaking up with Naomi, Kris invites her to dinner to catch-up on their complicated lives, relationships, and Kris’ transition.

When Kris (Pooya Mohseni) first sees Naomi (Lynn Chen) after a decade apart, not much is needed to be said to know that they have a lot of history together. With See You Then taking place primarily over one night, the viewer follows the two leading characters as they talk about what has happened to them over that span of time. It is a very simple concept, presented in a short 75-minute runtime, and it works beautifully here.

With this story, you feel every emotion that director and writer Mari Walker wants you to feel. In the short runtime, Walker is able to pack a punch due to the tough themes and the willingness to be open and vulnerable with them. This is a screenplay that is dependent on the dialogue flowing naturally and the telling a story of a lifetime through the conversations experienced over this one night. The film works because of the screenplay, as even though many of us will not be able to relate to what Kris has gone through in her journey of transitioning, we can feel the impact it has had on her life and know what this moment means for her.

When you have a screenplay as emotional and personal as this one, you need strong performances to back this up. Pooya Mohseni and Lynn Chen both do a wonderful job in the roles that they are given. Mohseni carries the emotional arc that her character must go through, and it is clear why she was chosen for this role. Casting a trans actor to play this role adds so much to this narrative that has been lost in other films that try to tell a trans story, and I am glad that Mari Walker pushed for that representation in the film.

The film tackles the trans storyline in a way that I have not seen before on screen, and that is also used to explore gender issues. With Kris identifying as a woman and transitioning, the screenplay has both Kris and Naomi talking about the issues that women must go through and how Kris is learning about these struggles in-person. It is a bold discussion and a stand-out moment in the film as Naomi confronts Kris about how men do not listen when women bring up these issues. It is filled with passion, and I admire Walker and her co-writer Kristen Uni for highlighting these issues.

More is revealed about Kris and Naomi’s past relationship over the course of the film, and it is interesting to see how people in their lives from the past come in to interact with the pair. With some people not recognizing Kris due to her transition, the awkwardness between these meetings can be felt and it is played well on screen. It’s hard to know how any of us would react in that situation, and we can feel Kris’s struggles to grapple with the past and the present during these sequences.

The filmmaking is simple, allowing for the dialogue to be the focus of the film. There are some small aspects of the narrative that do lack, particularly because it is trying to keep some of the story unrevealed at the beginning. The situation escalates incredibly fast by the end of the film, so much so  that it does become a little unbelievable that there would not be more of a reaction when they first see each other. It would have also been nice to extend the ending a little more, as the conclusion does not quite have the impact that matches the rest of the story.

While I would recommend seeking out opinions on this film from those within the trans community to see how they feel about the representation in this film, it is great to see authentic casting and a narrative that is as focused as this one. See You Then is small and intimate, and it plays on that so beautifully. It won’t be the best piece of filmmaking you see all year, but it might just be one of the most honest. This is the sort of storytelling we need in the film industry right now.