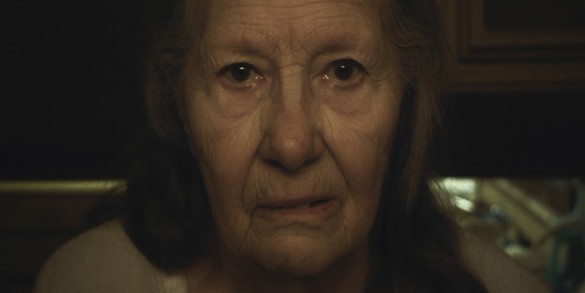 Synopsis: Secluded in a desolate forest, a broken family is observed by the demon Sator who is attempting to claim them.

Inspired by true events concerning his grandmother and the supernatural entity she believed she conjured in the Summer of 1968, Jordan Graham has spent the last seven years directing, writing, and producing an astonishing personal project that is so scary it feels dangerous even writing about it. Graham spent months filming in remote cabins and his grandmother’s home – who also appears in the film during home video flashbacks – with only one or two actors, made all the more impressive considering how much of the film doesn’t rely on dialogue. It may have taken him seven years, but Graham hasn’t wasted a day. Thrillingly new, genuinely unsettling, Sator manifests an atmosphere so convincing it pours out from the screen and into your bones.

Almost entirely contained in an isolated forest and single house, this slow-burn horror shares its DNA with the likes of The Witch and Hereditary, and the murky mysteries of The Blair Witch Project and Lake Mungo. Sator feels like the best of those worlds. It has the ingenuity of the found footage format when this style felt fresh – although the implementation here is far more imaginative – and the rural physicality of a film like The Witch. But Sator is entirely its own menacing creation, and Graham his own incredible talent. The creature work is good too – of what there is anyway. But Graham impresses the most with his command of space and tension. The environments feel so aggressively tangible and unknown, that the supernatural elements remain, for the most part, frighteningly grounded. It wavers a little when a woman is invisibly air-lifted into the trees, but your shoulders are so tense at this point it’s hard to question it all – all you want to do is run in the other direction.

The story is the weakest element of the film, but it feels minor when you can’t keep track of the last time you breathed. And there is a case to be made that Sator loses steam the further along it goes, but the first hour is, at least, really special. A brilliant opening black and white prologue feels like footage resurrected from an ancient crypt, shot in grainy 4:3 ratio. An old woman scribbles messages on the paper in front of her, which you then realize are the title credits and production companies. It’s the first sign of the director blending truth and fiction, and this beginning already shows that Graham is as keen to play with the medium as he is in using it to scare us senseless. As we’re shown a bizarre ritual, oppressive whispering drips in from the corners of the screen. We’re hearing the same tormented chant that plagues the characters in the film, and it rarely lets up, fusing both the idea of an infectious mental illness and a terrible haunting. You’d be hard-pressed to find a more compelling opening sequence. One slight issue is that this opening aspect ratio is quite ridiculous on a small screen, so the biggest screen you can find is a must for the best experience. Graham dabbles with various film formats as Sator drifts between tragic documentary and arthouse horror. It’s one of several compelling creative choices that make this a difficult film to unpick on first viewing but an easy one to recommend because it’s so exciting in execution.

The intro, disappointingly, is pretty insignificant and unrelated to the rest of the film. As soon it ends, the camera stretches across the screen, color seeps into the film, albeit a constant mush of green and browns and flickering flames in the darkness, with the occasional stunning wintry shot of the encroaching wilderness. We’re introduced to Adam (Gabriel Nicholson) who strings about a dozen sentences together in total, which means Nicholson’s performance depends on his physical presence and ability to look afraid and frightening. To his credit, Nicholson does everything required, although the script doesn’t allow much room for movement. Adam has been unofficially banished to the remote woodland because he can’t get over the demonic chanting in his head, whispers that have sent his grandmother into psychiatric care, and his mother missing or dead. His cabin is rigged with an old computer that brings up the security cameras lining the perimeter of his home. What does Adam see? It’s unclear, but you can feel something staring back.

The idea of generational trauma and mental illness is a running theme, as is the inability to separate mental trauma from physical threats. It’s long been tied to the genre, and horror itself as something unknowable, untreatable, dating back hundreds of years to when people would have been imprisoned for displaying mental fragility. And while this stems from Graham’s investment in the film – his grandmother is literally embedded into the plot – the director is far more comfortable conjuring a sense of unease from the environment rather than showing it through his characters. Adam’s family, which also includes his estranged brother and sister, has been stalked in the shadows for decades by an unseen entity that goes by the name of Sator. It’s not obvious what it wants, only that it’s bad news if it likes you. Not the most original of ideas, but the power of this film is in the permeating dread conveyed from beginning to end, and the ability of Graham to translate that into a foreboding nightmare.

Something as innocuous as a makeshift whistle screeching in the desolate mountains feels chilling, even though there has been no indication to suggest that it should be. The simple fact that it is, tells you all you need to know about the talent behind the camera. Graham’s soundscape is smartly contained to earthy, physical things, like snapping twigs and creaking floorboards; there’s no dramatic score drowning out whatever evil is happening on screen. The phenomenal sound design does so much of the heavy lifting needed to cement this metaphysical horror into bone-chilling reality. When somebody approaches Adam’s cabin door in the middle of the night, you definitely know about it.

It’s not all excellent, that would be too much to ask from Graham’s seven-year project. He isn’t immune to cliches of the genre either. A wild dog turns up in the first act only to violently snarl a day later and subsequently disappear by the midway point. The lack of a narrative focus reveals the film’s budget, with filler scenes spliced into the script to support the shallow substance. It makes it feel longer and slower than it is, although I didn’t mind this. Sator also loses its grip whenever it focuses on any of the characters. Neither the supporting cast have much to do, only there to give the film a sense of danger, which only works in creating a surface-level fear because it’s difficult to care about any of these characters since you’re given so little. If weak characterization and story is a deal-breaker, and it often is, Sator is likely to frustrate. Certain aspects late in the film are trickier to accept than one would’ve liked, particularly the ending, which is too hazy and the explosion of violence too far away from the film’s atmosphere to create a lasting impact in the way that it should have been. For all its dizzying early promise, Sator peters out rather than flashing to an emphatic halt. Fortunately, Graham is so assured everywhere else, and his film so visually and audibly stimulating, that it overshadows any flaws.

Accept the film on its strange, brilliantly unnerving terms, and you’ll find it slipping into your dreams. Any horror fan should be scrambling to see this as soon as they can.