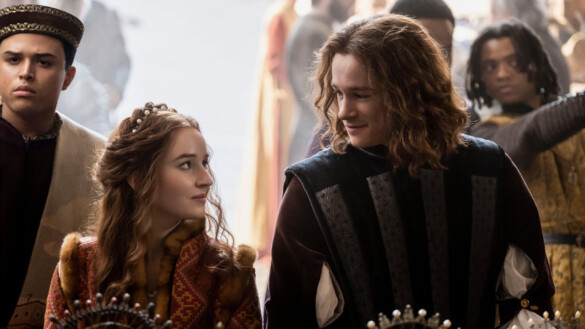 Synopsis: A comedic retelling of Shakespeare’s “Romeo and Juliet,” told from the point of view of Romeo’s jilted ex, Rosaline, the woman Romeo first claims to love before he falls for Juliet.

There have been hundreds of Romeo & Juliet adaptations, and derivative takes on Shakespeare’s play in film. Few of them have been genuinely good, save for West Side Story, which was a refreshing and modern take on the play. Disney’s latest readaptation of the play, Rosaline, is not only based on Romeo & Juliet, but on Rebecca Serle’s “When You Were Mine,” which was a modern retelling of Shakespeare’s tale. However, Rosaline is an anachronistic adaptation, retaining its story in a period setting, while infusing contemporary elements in it. It’s not a perfect movie, but it’s certainly fun enough to hold your attention for the next 96 minutes.

Part of the reason why it works so well is how fun Kaitlyn Dever is as Rosaline Capulet, who has been romantically involved with Romeo Montague (Kyle Allen). However, the Capulets and Montagues are at odds with one another, and are on the brink of war. When Rosaline’s father (Bradley Whitford) arranges a date for her daughter with Dario (Sean Teale), she misses the opportunity to dance with Romeo at the Capulet masquerade ball. Meanwhile, at the ball, Romeo predictably falls in love with Rosaline’s cousin, Juliet (Isabela Merced). Rosaline first warns Juliet of Romeo, but the plan backfires when her cousin learns that they were lovers and she is trying to win him back.

It’s not a particularly refined plot, but it’s tons of fun to watch Dever and Merced have a palpable on-screen rivalry. They have great chemistry when they’re together in earlier scenes, and their comedic timing is excellent. One of the funnier anachronistic aspects of the film is how it doesn’t care which character has an accent or not—some have a ritish accent, some have an American accent, others have a mesh between the two, and it’s always funny when two distinct accents are pitted against each other on screen, such as Rosaline’s relationship with Dario. Teale brings a hefty amount of charm to his role, and is always hilarious when paired with Rosaline. It’s a shame that his character is underused, much like Minnie Driver’s Nurse Janet, who barely has anything to do.

I was also impressed with how brilliant Bradley Whitford and Christopher McDonald were as the Capulets, who bring a more sophisticated amount of comedy than Dever and Merced’s quick-witted banter. It neatly balances out the many forms of comedy that director Karen Maine throws at the viewer.

But it doesn’t always work. There are lots of solid moments involving the protagonists, but many of them fall in the cliché category. It doesn’t help that, yes, even if the movie tries to turn the Romeo & Juliet story on its head, you still see everything coming a mile away. I won’t give it away, but let’s just say that Dario seems too good for Rosaline to want to go back to Romeo, if you know what I mean. Oh, look at them hating each other at first. Yeah, it won’t last. The more they learn about themselves, they’re going to fall in love. It’s written in the sky.

But regardless of its predictable story, Rosaline is a far better readaptation of Romeo & Juliet than Baz Luhrmann’s dreadful Romeo + Juliet. Its performances, particularly from Dever, Whitford, and McDonald, greatly elevate the material. If you’re looking for light entertainment on a rainy Sunday afternoon, Rosaline will do the trick, especially if you’re looking for a movie whose actors are fully committed to their roles, despite its screenwriting inconsistencies. For me, a piece of light entertainment after being winded by a flu shot felt like it was what the doctor had ordered. And it’s good enough for me to recommend it.