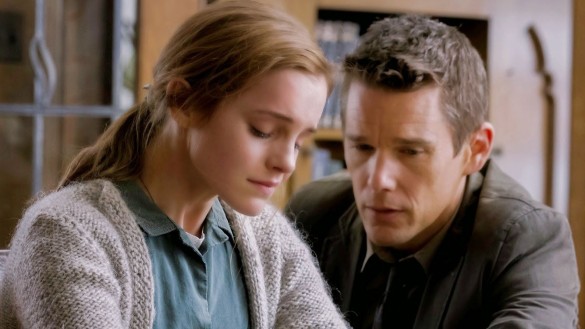 Synopsis: A detective and a psychoanalyst uncover evidence of a satanic cult while investigating the rape of a young woman.

Alejandro Amenábar has made some noteworthy films in the past, including The Others, Open Your Eyes and The Sea Inside, so Regression was a film on our radar going back to last year. The film was pushed back to February of 2016 due to unknown reasons with zero marketing behind it but we tried to keep some hope for it. Amenábar is a good director and this cast is quite good, including Ethan Hawke, Emma Watson and David Thewlis. On paper, this was ripe with potential.

The film, set in 1990, opens with text on the screen telling us that fear ran rampant in the 1980s about Satanic cults around the country. We then move to Bruce Kenner (Hawke) and Dr. Kenneth Raines (Thewlis), a psychoanalyst who specializes in regression therapy, as they investigate the possible abuse and rape of a young woman (Watson). That rape was allegedly at the hands of her father (played wonderfuly by David Dencik), but the story doesn’t quite seem to make sense to Kenner, who suspects something more. Kenner and Raines gather evidence and put several people through the therapy treatment as they try to find answers, which rubs up against the possibility that a Satanic cult may be the culprit. Kenner is very skeptical at first but as the investigation continues, the further he gets dragged into this alleged world of “pure” evil.

While the film’s first act is quite good, the film however quickly fizzles out by the mid-way point. It becomes consumed with being something it isn’t and as a result, Regression becomes overly convoluted, tropey and lacking any real enlightenment. The third act twist smears itself at the audience and pretentiously tries to act like something of meaning. But in reality, the twist is predictable, trite and even somewhat offensive.

Amenábar is trying to debunk the direct notions and allegations he’s using to invoke the film’s premise, the thing he’s relying for to give us cinematic suspense. Instead of genuinely playing with the tropes and giving this film depth, it’s like he’s making fun of them. The climax of this film especially comes off as indignant and callous. Amenábar wants us to believe the film is revealing something of meaning regarding spirituality but the film is convoluted and juggling too many aspects for it to feel earned. But the topper is how it feels like an entire set up to a punchline where he points a middle finger at the audience. The rug is pulled out from under you to reveal that Amenábar was never concerned with spirituality, it’s validity or the nature of good vs evil. It’s treated as a joke, which is unfortunate because this film was set up to be thematically rich.

Instead, Amenábar’s writing is the real joke. The carelessness of the the script is also reflected in some of his direction, which is some of the weakest of his career. The scares aren’t that impressive and the film lacks suspense and drama throughout. Initially, the mystery is gripping and the characters are interesting but soon it all becomes banal and stale.

Hawke, Watson and Thewlis all give good performances though, despite the writing of their characters not earning their revelations throughout. Roque Banos also gives a score that works beautifully here as well.

Overall, Regression doesn’t progress in any compelling fashion and it’s pretty forgettable. In fact, the experience in a word was, cheap.