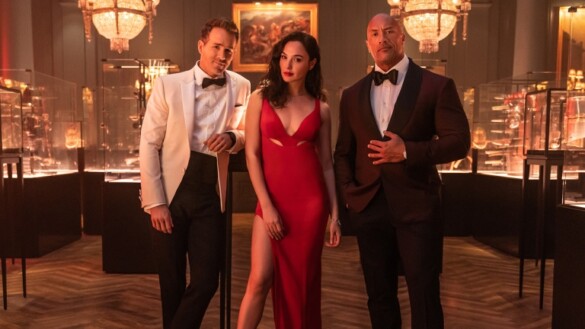 Dwayne Johnson has proved himself a competent, charming, capable screen presence, yet his physique marks him as an outsider. It’s funny to watch him and think of him as an FBI profiler with that body. It’s not to say that there isn’t one FBI profiler out there with a bodybuilder physique, but it strains credulity. It was the biggest laugh in the film when Johnson says his title with a straight face.

It’s also pretty boring that every thief, law enforcement agent, archeologist, and treasure hunter is also an expert in mixed martial arts. It’s obvious why this is exciting for the audience because we are treated to complex moves, impressive stunt ensemble performances, and deft, if a little too quick, cutting from combatants to reactions and back to combatants. Though, what happened to the exciting thought of a cat and mouse thriller on its own? Why can’t an art thief and their platonic lover of a law enforcement agent just be that? It always comes down to firing endless amounts of bullets and blowing up lots and lots of things.

Rawson Marshall Thurber’s intriguing game of a script is bogged down in action set pieces. Red Notice’s characters are failed by the lack of interest in their development or stories. They become weapons of mass quipping, firing off charms and sensuality without having anything to back them up, which makes the eventual twists, double crosses, and triple crosses a bit of a shrug toward a lackluster emotional landing. Though, Gal Gadot has never been more interesting than she is as a smarmy antagonist with a few screws loose.

What keeps you invested in seeing the film to the end is that there is a twist. The clues are there throughout and the idea is at the back of your mind, but to put it all together completely is difficult, which is the mark of a good twist. There are no red herrings to follow, just an itch on the back of your neck that won’t be satisfied. Though, as soon as the twist is revealed, the film takes a downward turn that makes you wonder if they thought of anything beyond that point other than, “could there be franchise potential here?”

It would be better to write that Red Notice is horrible, that the filmmakers had no idea what they’re doing or that it looks poor. Yet, Red Notice is competently made and with intention. It’s something you’d expect to have a car commercial in the midst of a chase scene and to hint at a more exciting world of gentleperson art thieves, but never really get there. It’s a fair to middling action comedy that’s got three of the biggest stars in the world doing everything they possibly can to charm you into submission. The worst thing that can be written about Red Notice is that it is just fine when viewed from a laptop and a bigger screen would have added nothing to it.