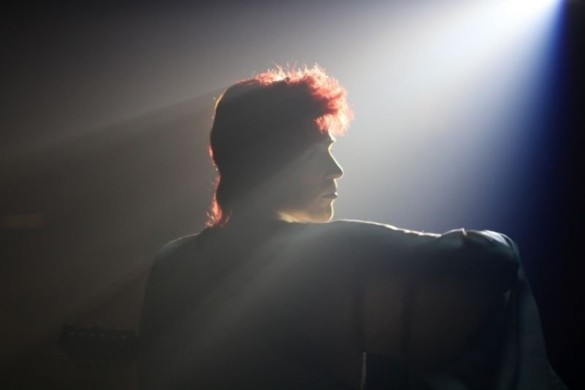 Synopsis: Stardust chronicles the young David Bowie’s first visit to the US in 1971 – a trip that inspired the invention of his iconic alter ego Ziggy Stardust.

This may be a bio-pic about David Bowie, but I want to start this review by making a disclaimer. Unlike other biopics in the past two years, particularly Bohemian Rhapsody and Rocketman, Bowie’s family had no involvement with the project. In fact, Bowie’s son Duncan Jones has been open about not supporting this project from the start. In 2019, it was confirmed that this film was not granted the right to use Bowie’s music in any part of the film. This will be a fair review of the quality of the film itself, but the disclaimer is worth noticing if you are a fan of Bowie and wanted to see the film purely for support of his work.

When the trailer dropped for this film a few weeks ago, many of us looked at it and realized what we were getting into a mess capitalized by the success of bio-pics of the beloved musicians in the 1970s. I will full on confess: I am a defender of Bohemian Rhapsody. It’s not a technical masterpiece and it certainly didn’t deserve the Oscars that it won, but it was a celebration of Queen and a lot of fun whilst doing so – especially the recreation of the Live Aid concert. Many of us will agree, however, that Rocketman was a strong bio-pic filled with heart, a compelling story, and a wonderful leading performance by Taron Egerton as Elton John, something he helped create from start to finish (and fought with several countries to be allowed to show the way he wanted it).

Quite simply, there is none of that in Stardust. If there is one good thing about this biopic, it is the casting of Marc Maron as Ron Oberman. Maron not only brings the energy up in this film, but he is believable and he really does care about this project. It is known to fans of Bowie that Maron is a huge supporter of the singer, and it was clear that he took on this project with good intentions and gave his best. When he was on screen, I found myself engaged with his performance and what his driving force was throughout.

The rest of the cast, however, each feel like they are in a completely different film. Johnny Flynn is disappointing, feeling held back and giving a monotone performance. He isn’t engaging when he performs, he isn’t engaging when holding conversations or putting his point across. He doesn’t feel like David Bowie or his alter ego, Ziggy Stardust. Whilst I have liked previous performances given by Jena Malone, she also doesn’t fit here in the role of Bowie’s wife, Angie. Whilst Flynn is held back and restrained, Malone feels like she is trying to give an Oscar-worthy performance in every scene and over-performs every moment, from the screaming to the crying.

Given the fact that the actors all gave different performances and none of them fit together, the tone of the film just did not work either. The start of the film sets up the concept of why Bowie is in the US, but it takes a ridiculous turn to try and get around the fact that they weren’t allowed to use his catalog. The premise of the film is that because David Bowie and his team were stupid enough to not get a work permit visa for the country, he is not allowed to promote his music in any way, resorting to covers and quiet talk. When this exposition was laid out originally in an airport sequence, I was shaking my head at how ridiculous they were making Bowie look. When the explanation as to why that was a plot point was revealed later in a dinner sequence, I laughed at how much of a stretch the filmmakers took to get the story to make sense without his music.

It was not only the script that was badly written. The film was just over 100 minutes long, and the bad writing and dull tone made this feel a lot longer than 100 minutes long. This bio-pic is meant to present Bowie discovering his alter-ego, and there should be a major arc and character development that comes with that. Sadly, all of that is lacking with none of Bowie’s music and instead insignificant gigs filled with cover songs and overdrawn dialogue that have no passion behind them.

I would forgive this film a little for being badly written or edited if the visuals were captivating or strong. That is not even the case here. For a film focusing on the creation of Ziggy Stardust, I do not get why the color palette is so bland. There are just scenes of washed-out browns and sandy-colored rooms and it just makes each scene feel faded and washed out. The make-up and hairstyling throughout are badly done, not just with Bowie but the supporting cast as well. The film starts with a captivating shot of Bowie in the spacesuit as a dream sequence, but from there it never has the innovation to do anything of that quality visually again.

I knew I would be disappointed with this film going into the screening, but even then I didn’t expect it to be this bad. I was trusting the actors to at least care about the performances and story, but I only found Marc Maron’s performance to be engaging. This film does not show David Bowie in a good light, and I can understand now why his family would be so hesitant to put their brand and music behind a project like this. If you are going to make a biopic about somebody as beloved as David Bowie is, at least respect him and not go down the traditional route. A David Bowie bio-pic should perform on the level of Rocketman, but this might just be one of the worst biopics to be made. For those who disliked Bohemian Rhapsody, you will be in for a ride with this one.