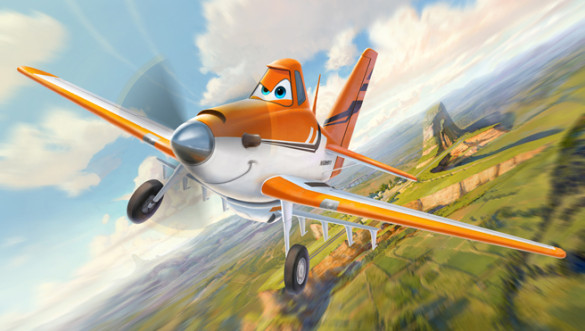 Synopsis: Dusty is a cropdusting plane who dreams of competing in a famous aerial race. The problem? He is hopelessly afraid of heights. With the support of his mentor Skipper and a host of new friends, Dusty sets off to make his dreams come true.

DIRECTION
Planes was intended to be a straight to VOD film before Disney execs decided to turn it into a 3D movie in the theaters and that needs to be a clear distinction to understand this movie. That being said, for what Planes is Klay Hall does a pretty good job with a new take in the Cars universe. The flying and action visuals are amazing and it’s easy to see why Disney wanted to convert this to a 3D theater experience. The first and third person camera perspectives were awesome and a lot of fun, especially if you’re a fan of the content. The use of old WWII planes mixed with new military jets and everything in between was also a lot fun. F4U Corsairs, P51 Mustangs, F18 Fighter Jets. Yep, the planes and the visuals alone soar in this movie.

SCRIPT
The script is not great but there’s more here than what you’d think on the surface. The basic outline is the underdog story who is too small and weak to compete but finds the heart within himself to go for it. Our main protagonist is Dusty, a crop-duster, who is looking for something deeper and new in his life as he enters a race around the globe agains planes from other countries. He establishes a relationship with Skipper, a WWII F4U corsair who’s reputation as a mighty fighter pushes Dusty beyond his limits and I thought it was played off really well. Both characters of Dusty and Skipper are funny, likable and have something to offer. Unfortunately the rest of the character are mundane, full of stereotypes and are only used as plot devices to help carry the movie. The stereotypes can be distracting and while they are silly, goofy and not needed, there’s a lot more to what’s going on. The journey of the story is fun and it’s the underdog story that is appropriate to this film. Overall, this story isn’t amazing, but if you’re a fan of planes like I am, you’ll have a lot of fun with this.
Grade: B-

PERFORMANCES
Dane Cook is actually not bad in his performance as Dusty and is even pretty funny is some instances that I didn’t expect. While Cook may not have the star power to carry a lead, in a movie that has little goals, he’s not bad and gave us a few laughs. Stacy Keach is amazing as Skipper, the WWII plane that has a lot of history that helps carry a lot of this story, in what I felt was a lot of fun. The other characters are goofy and cheesy and don’t add a whole lot to the movie. They aren’t necessarily bad but they just add some nice cheese to the film. It’s all about Cook and Keach, whose relationship and characters are the main focus here.

SCORE
Mark Mancina has done some great work but this score is pretty average. It definitely has it’s moments that are pretty great but overall it’s music that you would expect from a straight to DVD movie.