Movie Review: ‘Peter Rabbit’ is pleasant under one condition 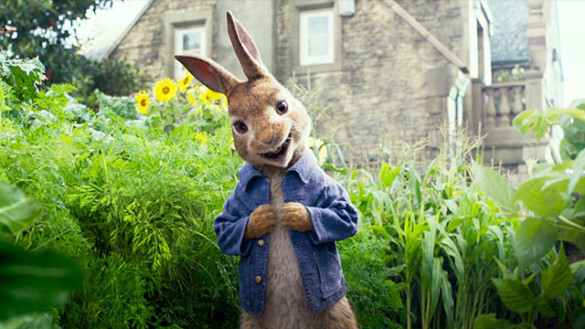 Synopsis: Feature adaptation of Beatrix Potter’s classic tale of a rebellious rabbit trying to sneak into a farmer’s vegetable garden.

Start repeating this: “Other than the name, this rabbit ain’t the same.” Save for two sequences where Sony Pictures’ take on the jacket-wearing hopper mirrors Beatrix Potter’s—hand-drawn and tonally gentle—the film operates between fourth and fifth gears. Why, yes—that equates to an ill interpretation of the source material, but if we’re still doing our repeating, “why, yes” is also the answer to whether this Peter Rabbit deserves at least one watch. Surprise.

The grandest jolt, however, is that of Mr. McGregor (Sam Neill), the horticulturist archnemesis of Peter (James Corden), being carried away by an “ice-cream truck with all the lights” for good. Ain’t that a fine cue to party, or wreck the house, with other members of the burrow — Benjamin Bunny (Colin Moody) and the triplet Flopsy (Margot Robbie), Mopsy (Elizabeth Debicki), and Cotton-Tail (Daisy Ridley)—and fellow garden dwellers (from Potter’s other anthropomorphic tales). It’s not veggie-ever-after yet as Mr. McGregor’s temper-prone and meticulous nephew, Thomas (Domhnall Gleeson), is coming, and he’s planning to have the house in top form to put it on the market.

Lotsa changes and removals there, though the vibrant color-book aesthetics remain untouched. Wise is the person bringing Roger Ford on board, the production designer who has in his résumé every installment of Narnia and of, in many ways Peter Rabbit’s twice-removed cousin, Babe. The scenery is the film’s sole note of tranquility, a detail one might overlook—and, in a sense, deliberately made so—as afterward Animal Logic’s rather-impressively detailed critters will trample onto the scene, dash away, drop hits (ever curious what the ‘Animals and Greens’ remix of Fort Minor’s Remember the Name sounds like?), and engage in lawn warfare. Amid the constant buffet of frenziness, d.o.p. Peter Menzies Jr.’s zippy, mainly low-hanging camera is never a laggard, which means the act of reminding oneself that on the screen is Peter Rabbit and not Clash of the Titans will be frequent.

Frankly, it’s easier to do the latter than falling in love with Peter—unless “young and reckless” is still “it,” relationship-wise. Corden is a most-fitting choice to exude the confidence-drunk, overtly sharp and quip-crazed personality blend, as evident in those Late Late’s skits, but in turn those slower, emotional beats—Peter has feelings for McGregor’s neighbor, the radiant Picasso-wannabe Bee (Rose Byrne)—feel borderline out of place and strokes of humility come across as filler despite Dominic Lewis’ background score ardently trying to prove the opposite. Still, good on director Will Gluck—admirably diversifying his range with animation after a musical and many comedies—to not ask his human cast channel Alvin’s Jason Lee, and so there’s a presence of merriment from seeing General Hux channeling his klutzier persona and how kind Rayna Boyanov has become post Spy.

“The way they put [the tagline] ‘Rascal Rebel Rabbit’ so prominently there makes me thought that was the title,” whispered the man in the front row—twice—to his wife seconds before the Sony logo pops up. He’s not exactly wrong. Yet, he rollicks through the film at its best—a few lines and two running gags, one of a father-to-be rooster and to-be-interrupted sparrow chorus, are genuinely amusing—and its worst—foiled “plumber’s crack” attack, radio-station mentality, and regular bouts of self-congratulation, as with the majority of the auditorium. Guess people are aware that this is the U.S. version of Peter Rabbit after all.