Movie Review: Only Yesterday beautifully shows the power of nostalgia 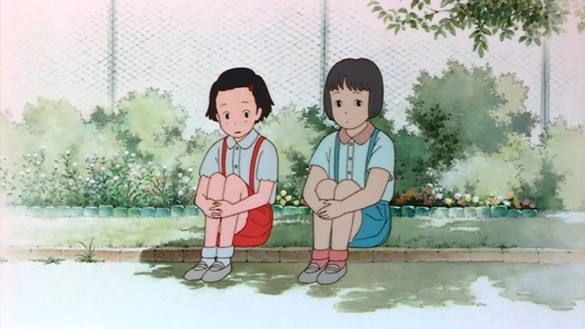 Synopsis: A 27-year-old office worker travels to the countryside while reminiscing about her childhood in Tôkyô.

Studio Ghibli has been one of the most underrated movie studios we’ve seen over the last 30+ years, at least in the west. If you ask us, Hayao Myazaki and Isao Takahata have not only created some of the best animated films over the years, they’ve created some of the best films, period. Takahata in particular has been criminally overlooked, even within the Studio Ghibli bubble. It’s easy to talk about the masterpieces of Myazaki (Princess Mononoke, Spirited Away, The Wind Rises), but Takahata has some master class animation films under his belt as well. Pom Poko, The Tale of Princess Kaguya and Grave of the Fireflies are phenomenal films and some of the best of Studio Ghibli. Personally, Grave of the Fireflies is my favorite Ghibli film and one of my favorite animated films of all-time.

The other notable film from Takahata is Only Yesterday, a Studio Ghibli film from 1991. However, due to distribution restrictions, Only Yesterday never found its way to U.S. theaters until *this* year. Yes, it was a 25-year wait but it was worth being patient. Only Yesterday is absolutely beautiful and further showcases the prowess of Studio Ghibli.

Only Yesterday begins with Taeko (Miki Imai), who is now 27-years-old and decides to go on holiday to the Japanese countryside to visit a farm, something she’s always wanted to do. Before getting on the train to begin her trip, she begins to reflect about her experiences when she was a child, in particular the 5th grade. These nostalgic memories start to overwhelm Taeko as she starts to realize how influential these childhood experiences were for her. Eventually she boards the train and makes it to the farm where she meets Toshio (Toshirô Yanagiba), a young man who works at the farm and shows her around the countryside. As the two continue their venture, her childhood keeps making its way back to her, eventually paving the way for some big decisions near the film’s climax.

Unline Takahata’s other film’s, Only Yesterday will require some patience from the audience. The first ten minutes are rather jarring as the action shifts from 1982 (current day) to the 1960’s when Taeko was a child grappling with family and school. These shifts jump quickly, making the establishment of the film’s timeline, as well as the characters, a bit muddled in the beginning. However, after the first act, the pieces come together and things start to make sense. The emotional groundwork is laid and it methodically starts to fertilize. You won’t realize it at first but Only Yesterday sneaks up on you, slowly finding a poignancy in Takeo’s milestones as well as her ordinary moments. Takahata’s gradual build is very intentional and cultivates a richer understanding of who Taeko is over time, which beautifully comes to fruition with a literal tug of nostalgia.

The flashback sequences not only provide pivotal exposition but it wonderfully demonstrates the power memories have and how they eventually shape us over time. Takahata masterfully cuts back and forth between Taeko on the farm and her childhood, showcasing how these childhood experiences lead to who she is now at 27. Takahata is perhaps too calculated in parts but overall he acutely interweaves these notions into the larger scope of the film, which pays of massively in the final shot of the film and especially the scene in the movie’s end credits.

The animation of Only Yesterday is meticulously crafted with expert precision. Takahata uses two styles of animation to reflect the different time periods we see narratively. The flashbacks have a watercolor feel that uses more whites and brighter color schemes. The scenes in “current time” are more vivid, darker and modern in its animation style. The depth of the imagery in the countryside, showcasing Japanese landscapes, is utterly remarkable. There are a few shots in Only Yesterday that will make your jaw drop. Simply, the animation is exactly what you would expect from Studio Ghibli.

Studio Ghibli has its fair share of animated films directed more at children, but like The Wind Rises and Princess Mononoke, Only Yesterday is a film aimed more at adults. One could even argue young-adult women to be more specific. Much like those films, along with other work from Ghibli, Only Yesterday is mature in its content and honest in depicting relationships. Takahata isn’t interested in tying up Taeko’s story in a nice and neat bow. The ending isn’t dour by any means (Takahata did that once with Grave of the Fireflies and it still guts me to this day) but it is honest. Only Yesterday isn’t a perfect film, but that truthful and methodical storytelling makes for some powerful imagery as the film closes that is very moving.

Hear our full review on Episode 177: