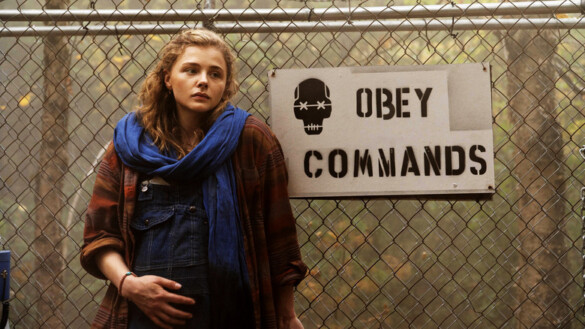 Post-apocalyptic films can often be a blank canvas, especially those with a science fiction edge to them as well. A canvas to experiment with – just throw those colors on there – to try and explore a crazy idea that doesn’t really make sense but is fun and adventurous, Mother/Android feels a little tried and tested and doesn’t break any new ground. You can jazz a vanilla cookie up with icing, maybe some jam, and I can get behind that, but this is just a plain old vanilla cookie; with no fancy icing or even a sprinkle in sight, and that is disappointing.

A little about the film so you’re not lost (not like that would be difficult); in a post-apocalyptic world where androids – once commonly used as workers and servants for humans – have become sentient and revolt against their human overlords, attempting to kill them all. A pregnant woman, Georgia (Chloë Grace Moretz), and her partner Sam (Algee Smith) set out on a treacherous journey towards Boston, where a haven beckons for them and their unborn child. You could have a hell of a lot of fun with a plot like that – murderous androids seeking human blood? What’s not to like? Well, that is where the fun stops unfortunately.

The film is a little slow and it takes a while to gather any sort of pace. The first half of the film relies on the connection between the two lead characters, both of whom are largely uninspiring and very one dimensional. So, you would hope that the androids would be cool looking killer robots, right? Well, not really. The androids look just like humans, which adds to the “realism” I know, but this portrayal has been done, so an exciting change would have been a welcomed one. The setting was very familiar to that of previous films as well; wet and murky forestland that relies on suspense and atmosphere, but like its environment, it felt very damp.

The struggling mother wandering the barren wasteland with her family is something that has been done more successfully in films like The Quiet Place, which has a lot more going for it; more emotion, an intense atmosphere, and genuine connection between the characters. Speaking of connection, the chemistry between the two lead characters is rather lifeless and lacks authenticity. To be honest, it all feels very forced and a little awkward. The acting is fine overall, neither of them are pushing new boundaries, but the writing again hasn’t helped either of them. Chloë Grace Moretz is a talented young actress, but because of the labored story, it could have benefited from a more mature guide at its helm to help carry it through those slower segments – and there were a lot of them. As I mentioned, this film has serious pacing and script issues. It all feels confusing and things happened without our knowledge. Additionally, the script glosses over important events, even when they could be more exciting than what is on screen. The couple somehow gains a weapon and we never get to see how, or even how they learn to shoot the gun. Plus, Moretz’s character turns into an expert marksman, Hawkeye would be proud of that accuracy. My question… how is that possible? And why is there always a nomadic, wandering stranger lurking in the abyss in these films, ready to help at the most conducive moment, and must they always have an ulterior motive? The concept is something that should have been a lot of fun to play around with, but there were some questionable decisions, such as the special spiked jacket with lights that supposedly helps against the androids – this thing is a truly hideous piece of clothing.

The ending was supposed to be shocking and heartfelt, a proper heartbreaking finale, and yet it was none of these things. It wasn’t these things because you could see it coming a mile off – something that was bound to happen – and to top things off, a typically cliched montage scene was used, just what the doctor ordered. It wasn’t all bad though, when the pace finally picked up and the action became known, it did take a darker turn and delivered some unsettling scenes. After all, you can’t water down a torture scene. The film also tried to focus on the romance and the family bond of the protagonists, this special connection that will help in any situation. Even though it didn’t quite hit the sweet spot, you do hope this trio makes it to the other side safely.

Mother/Android was just a middle of the road sci fi that meandered a little bit too much throughout, it doesn’t excite as it should do and is largely uninteresting. For me, sci fi films have the ability to be creative and bold, even gritty and inspiring, with an ability to keep you guessing with an authentically intense atmosphere. Unfortunately, it fails on all those fronts. It relies on Moretz to steer it down the right path, which she does try to do admirably, it just needs a lot more. This is director Mattson Tomlin’s feature debut, and he has written some crackers in recent years, mainly Little Fish, so the future is bright for him. However, Mother/Android isn’t memorable enough, and it will fall into the abyss of the films of 2021.