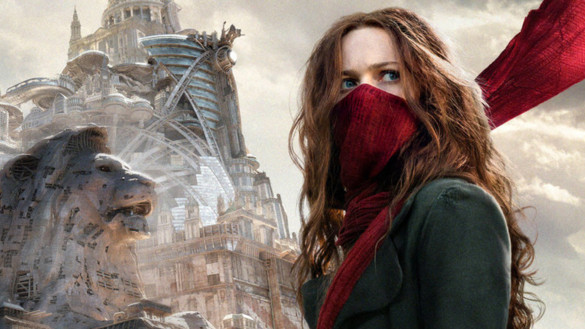 Synopsis: In a post-apocalyptic world where cities ride on wheels and consume each other to survive, two people meet in London and try to stop a conspiracy.

It took less than 15 minutes of Mortal Engines for me to get the overall tone the film was going for as well as the direction it was headed, and it was not a good one. Very quickly into the opening act, the story becomes quite a cliché and very predictable and from that point forward nothing about the film feels compelling. This is very unfortunate as the film’s premise is unique and right now there are very little offerings of films with a fresh idea and story so I was rooting for this one to be a success. But as it is Mortal Engines fails in many aspects and will likely be a forgotten film lost in the ashes of 2018.

Let me start with what I did like about Mortal Engines: The Visuals. Mortal Engines has some beautiful imagery and the CGI, although not perfect, can allow you at times to immerse yourself into this new world and its fantastic cities that both crawl across the sprawling landscapes and float in the boundless sky. Like most fantasy films without this kind of eye-candy, there would be less draw to it. Unfortunately, this is where all the praise ends with Mortal Engines. As aesthetically pleasing the film can be it will just as soon rip you out of that fantasy world with poor dialogue and flat storytelling.

It would be difficult to list the many things this film does wrong but what most stands out is a simple lack of character development and Mortal Engines has A LOT of characters. The most important name is Hester Shaw, played well by Hera Hilmar, the hero of this story with a tragic past and a single goal of killing Thaddeus Valentine (Hugo Weaving), this is the story at its simplest. Surrounding these two are an array of faces with names that sound like they came right out of a Final Fantasy epic (It would not surprise me to see a follow-up RPG in the near future). Anna Fang (Jihae), Shrike (Voiced by Stephen Lang), Tom Natsworthy (Robert Sheehan) and Magnus Chrome (Patrick Malahide) are just a few but there are many more each with their own role. But it would be unfair to point to the sizable cast as the reason why its difficult for me to establish some kind of connection with any of them. There are plenty of films like this that still manage to have you in tears over the even the most minor characters death. The problem lies in the storytelling that links all these names together. The film spends too little time with some while dragging out other characters stories that have no real impact or bearing on the main arc. In short, the film is all over the place. It can’t seem to find its footing as it bounces from one part of the story to another and never allows a pause to grab on and settle in. This isn’t to say that the film’s pacing is too fast, we have sentimental moments peppered about between individuals but we never really get a deeper sense of them. At least not enough to make us deeply care for what they have been through and understand their actions.

What also does not help is that as we follow along there are things storywise that simply don’t make sense and are never explained to the audience. There are some that you can speculate and theorize on but most had me wanting to pause the film and shake my head in confusion. A prime example is a particular character who is in constant pursuit of Hester and at every turn, he somehow manages to find her, with no explanation of how. Keep in mind Hester is in constant motion whether on some kind of motorized vehicle with wheels or in a flying ship and we are following her all over the world and still, he seems to know where she is at all times. This same problem occurs with another character that somehow manages to run into Hester at a specific place at a very pivotal moment yet, as far as I can tell, they had no foreknowledge that Hester would be there. These kinds of discrepancies may not bother others but I find it to be poor writing as these could have been avoided with simple explanations.

Mortal Engines could have been a success but the film suffers from a poor script, predictable twists and turns and most importantly it fails in offering the audience an emotional connection. All of the characters, Hester included, feel like throwaways and watching their struggle on-screen feels very detached. Even the side characters and random citizens come off as nothing more than background noise and their harrowing plight and deaths fall with little sentiment. The film does a poor job of establishing stakes which are necessary for the audience to buy in especially when it comes to fantasy films. My experience watching Mortal Engines was not unlike watching a sporting event with no team to root for. It can be entertaining at times but you have no emotional investment in the overall outcome. Unfortunately, this also makes the film feel like it is dragging since about halfway through all I want to know was how the story concludes with very little care for how it gets there. As much as I wanted to enjoy Mortal Engines it did very little to move me and keep me captivated.

All this being said there have been some recent films that I have watched and although I did not find them enjoyable I could see the film being very entertaining for children and that may be the case with Mortal Engines. The films pacing and style seems a better fit for a younger audience so although I could not recommend this film for a more adult crowd it may make for a fun family movie night.