Movie Review: Mike Flanagan knows horror and brings out the best of Ouija: Origin of Evil 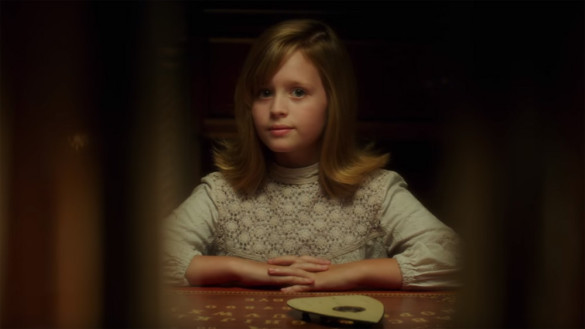 Synopsis: In 1965 Los Angeles, a widowed mother and her two daughters add a new stunt to bolster their seance scam business and unwittingly invite authentic evil into their home. When the youngest daughter is overtaken by a merciless spirit, the family confronts unthinkable fears to save her and send her possessor back to the other side.

The Ouija board makes for a perfect horror film, but in 2014 Ouija was a mediocre movie that barely scratched the surface and probably wasn’t enough to warrant a second film. However, Ouija: Origin of Evil is a superior prequel that is set 50 years earlier, and its visual style perfectly complements its period setting. Director/screenwriter Mike Flanagan (Hush, Oculus) is well-versed in horror films, and his artistic style made this movie much better than I anticipated.

Taking place in 1967, the Zander family, including widowed mother Alice (Elizabeth Reaser); teen daughter Paulina, known as Lina (Annalise Basso); and 9-year-old Doris (Lulu Wilson) run a fake medium business. Alice, at the advice of Lina, adds an Ouija board as a new prop in her business of comforting those who lost a loved one. Eventually, the board proves that it does have a connect to the other side and one of the spirits takes possession of Doris, and its intentions are not to go out for cake and strawberry ice cream.

Flanagan, like his other movies, slowly builds tension and rarely uses cheap jump scares (thank God) to craft a great film that sadly blows up in the films final act. In Oculus remember the brilliant scene where Kaylie (Karen Gillian) bites into an apple? There is a scene as captivating here, and that is a complete testament to Flanagan’s work. Ouija: Origins of Evil‘s visuals extend from how each scene is framed, all the way to the near-perfect set designs. The old Universal logo is even used during the opening sequences, a simple yet small gesture to keep up with the time setting.

One huge problem I have with demonic films is; there is always someone (usually an adult) that refuses to see what’s going on until it is too late. Ouija: Origins of Evil is a breath of fresh air as it doesn’t have one of these types of characters and the main cast works really well together. Reaser and Thomas, much to my surprise, provide unexpected depths to what could have been a very cliche role for both individuals. The real stars here are Basso and Wilson. Basso conveys’s a typical teenage experience and Wilson is probably the creepiest possessed child I have ever seen.

So far so good right? If this were any other year this would probably be a top 3 horror film for me, but this film’s narrative structure gets lost near the film’s back third that holds it back slightly. Ouija: Origins of Evil, despite everything, continues the great year for horror films. There is an end credit that connects this movie to the 2014 version, so make sure you stay till the very end.