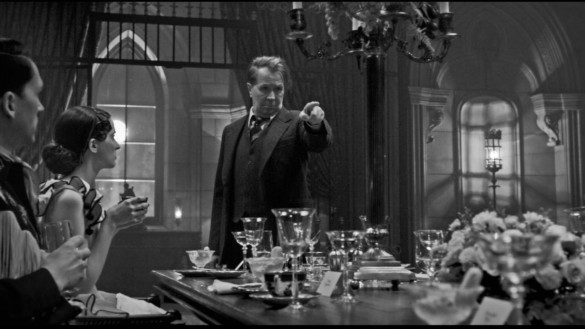 Synopsis: 1930s Hollywood is reevaluated through the eyes of scathing wit and alcoholic screenwriter Herman J. Mankiewicz as he races to finish “Citizen Kane.”

Orson Welles’ 1941 film, Citizen Kane, has become shorthand for greatness, like Michael Jordan or Shakespeare. If something is “The Citizen Kane” of its respective field, it implies a clear, objective superiority over its peers. Leave it to David Fincher to tear down the mythology of one of cinema’s most sacred cows. Mank is a passion project, of sorts, for Fincher, whose father wrote the original script for the film before his death in 2003. The film follows Herman J. Mankiewicz, who collaborated with Welles on the script for Citizen Kane, as he tries to put together a script for Welles. Tackling the mythos of Citizen Kane, perhaps the most mythologized film in Hollywood history, is an impossible task, and, thankfully, that isn’t really what Mank is about. Instead, Fincher sets his sights on the studio system and the way that those in power use their asset to remain in that position. It is the director’s most political film, to date, and it sees him taking a new tone. His characteristic cynicism is right on the surface, as usual, but the film is peppy in a way that none of his other films have been.

All of the technical attention will be paid to the efforts to make the film period appropriate, with sound design that will make you nostalgic for the ever-so-slightly muffled, echoing dialogue of many of the great films of Hollywood’s Golden Age. However romanticized the films of that era may be, the system surrounding them is shown to be a weapon used to eat away at the writers, directors, actors, and even the audiences inhabiting and surrounding what we see on the silver screen. Mank shows a new side to David Fincher, and while the style can overcome the understated storytelling, at times, it has a lot to say about the state of not just Hollywood, but the state of America. The film shows peak Fincher style and near-peak Fincher commentary.

It is fascinating to consider the evolution of Fincher, as a storyteller. After being burnt by the studio experience with his first feature, Alien 3 (a secretly very good film), Fincher became one of the most overtly stylish and over-the-top filmmakers, to great success, with films like Seven and Fight Club. He has maintained a distinct style, but his stories have become much more understated. Zodiac, for example, is a retrospective commentary on Seven, a film that laid out the blueprint for so much of pop culture for the next 25 years. Fincher is still the master of arthouse pulp (or, as I put it in the InSession Film podcast series, Prestige Trash,) but Mank strips out the pulp and goes full arthouse. The technical elements are sure to throw off contemporary audiences. The film is shot in black-and-white, albeit with a digital camera that sometimes feels at odds with the film’s aesthetic, and refreshingly stripped-down, narratively. The film seamlessly cuts between pertinent flashbacks and the contemporary 1930s, where Mankiewicz is bedridden, reciting a script to an assistant, played by Lily Collins. The flashbacks teach us what drives the script of Citizen Kane, as well as what made Mank become the honest-to-god loser that he reveals himself to be.

Well, maybe Mank is less of a loser than a nihilist, having been beaten down by the system of which he has become a witless cog. Mank is shown to be a bit of a gun for hire, lacking the clout to strike up a serious conversation with a producer, but very capable of gabbing with the bit players in a given production. Welles gives him more of a “prove it” deal than anything else. Mank is driven by booze and seeing his stories on screen, above all else, and the film sees him having trouble getting the writing done with the booze in an environment where alcohol is not permitted, but he is not irredeemable, by any stretch. In fact, his sense of morality is what drives him to succumb to his vices. He has to sell his soul to succeed in Hollywood. He somehow finds himself in the inner circle of one William Randolph Hearst (yes, the William Randolph Hearst around whom Citizen Kane is based) and comes to abhor the influence he has and the ideals he holds. While half of the film is spent with Mank trying to finish the Kane script, the other half is spent showing how those in power abandoned the middle- and lower classes during The Great Depression and went very far out of there way to suppress California’s socialist gubernatorial candidate, famed write Upton Sinclair, who is played by, you guessed it…. Bill Nye. Yes, that Bill Nye.

Conservatism is the driving force of many aspects of the world, because it allows those in power to remain in power, whether that power is within a studio system or within a country, at large, and Mank presents both of those possibilities as two sides of the same coin. He struggles to write a script in the same way that he struggles to acclimate to high society. As the underlings at the studio starve, the execs feign empathy, lying about repaying employees for lost wages. But Mank has to bite his tongue. His relationships are good for his character. People like his unique sensibilities… to a point. History was not kind to the real-life Mank and the film would lead you to believe that his rather forgettable post-Kane career was due to the people who hold all the cards. Sure, he was self-destructive, and Fincher always lets that be known, but his mild radicalism is really what held him back. In the world of Mank, creating propaganda films is a death sentence. Artistic integrity is the way to interior prosperity, even if it also leads to financial and professional ruin.

David Fincher respects Herman Mankiwiecz because Herman Mankiwiecz wanted his voice to be heard. He respected Mank because Mank lost it all at the hands of people who had more power. One can’t help but think of Alien 3 when watching Mank, as it established the base for Fincher’s thoughts about Hollywood. Fincher is an unstoppable force of creativity, and his vision is uncompromising. It has made him hard to work with, undesirable in the eyes of studios, and one of the best filmmakers of the last 30 years. As usual, Fincher’s film features remarkable performances out of everyone in the film, including standout performances from Gary Oldman as the titular Mankiwiecz and Amanda Seyfriend as Hearst’s girlfriend, Marion Davies. Oldman, who is a good thirty years older now than Mank was during the era of the film, shows Mank’s exhaustion and sadness incredibly effectively. Mank is talented, Mank is well-intentioned, but Mank doesn’t play by the rules. Not playing by the rules can often be the root of great art, but it is no way to go about building a studio career. Meanwhile, Seyfried gives one of the best performances of her career as Davies, who sits right in the middle of the film’s dilemma. She knows her life is one of privilege and that she is not in the right, morally. She also loves being rich and having the power that comes with being Heart’s partner. In a film where the men are stubborn and uncompromising, Davies is understanding and, while she doesn’t ultimately promote what is best for the whole, understands the plight of a man like, Mank, whose plight to do what is right seems foolish, in the context of the film.

All of Fincher’s stylistic touches, like artificial cigarette burns on the film and some spotty CGI, may not entirely work, but Mank keeps him at the top of the heap when it comes to modern auteurs. With his first feature film in six years, Fincher captures the spirit of a country in crisis, not just now, but for about a century. Fincher’s irony is at the forefront, as a frequently jazzy score by Atticus Ross and Trent Reznor rattles through much of the film, making the deterioration of a nation before Mank’s eyes even more dramatic. Mank is far less a love letter to Old Hollywood than it is a condemnation of Hollywood, over the course of the last century. Mank is a movie that can be watched without any reference to Citizen Kane and understood perfectly. It is about the plight of the everyman and the difficulty of doing what you love. It is a film that uses the aesthetics of Old Hollywood against itself, showing that the more things change, the more they stay the same. Power is power, whether that power is shown on the big screen or not. Life in the studio, and in America, is a Sisyphysian struggle against the powers that be. We may not be able to completely overcome it, but we can do some great things on the way to our destruction.