Movie Review (Sundance): ‘Ma Belle, My Beauty’ is a Film to Observe, Not to Be Invested In 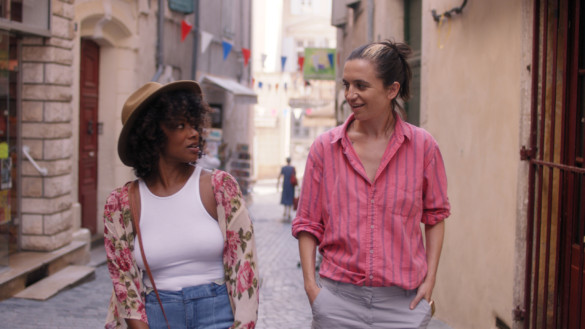 Synopsis: A surprise reunion in the South of France reignites passion and jealousy between two women who were formerly polyamorous lovers.

This is very much an observation film. Placed in the stunning South of France, the cinematography is able to shine as it captures the beautiful scenery. It is easy to watch this film and dream about being out of lockdown and heading to France, admiring the views and drinking a lot of wine. You can’t help but want to stay in this film for as long as possible.

Marion Hill does a good job at creating atmosphere, particularly with the numerous party scenes within the film. There is a cozy atmosphere to these scenes, particularly with the music that is played over it and the sound mixing done with the crowd chatting. It never becomes overwhelming but helps place us in the scene and be swept away by how lovely it all is.

There is one particular storyline within this film that I was intrigued by, and that is Bertie’s journey of gaining confidence and getting back into music. This is something that is immediately introduced in what is a lovely opening, and the strongest scenes in the film from that point are when the music storyline is brought back into play. Actress Idella Johnson, who plays Bertie, has an incredible voice and it is a shame that the storyline doesn’t go as far as it possibly could have.

Whilst this is a beautiful film to watch in terms of the production design and cinematography, a lot is left to be questioned with the screenplay. I sadly could not find myself invested in any of the relationships formed in the film, even the focal one between Bertie and Lane (played by Hannah Pepper). This is because the film becomes extremely predictable in how it handles these relationships and the bond that Bertie and Lane had in the past. This is a similar story to others done in the past, in which two exes rekindle their love behind closed doors, and the audience is left wondering what will happen to them by the end.

This is a story that did not need to be 93 minutes long, and that is already quite short for a feature film. The pacing is slow, which is nice for the atmosphere but ends up highlighting the weaknesses within the script. If anything, this would have made for a compelling 30-minute short film. There would not have been the same amount of pressure placed on these sub-plots that lead nowhere or to have the plot go as slowly as it did. In 30 minutes, it would have been able to tell a more compact version of this story and still have the gorgeous background to get the audience invested in this world.

What disappoints me about this film is the potential that is within it. Somewhere here is a good film, and there are some great ideas. The film did pick up near the end when Lane starts talking to another girl at a party and goes on the road with her. It felt like the film was going to have some sort of conflict, something for Lane to try and figure out in terms of her emotions. However, this is another example of wasted potential when this storyline is rushed through, just so we can get back to Bertie and Lane. The film needed to trust the audience more and let us go fully on this journey, not to place these interesting ideas as mere bumps in the road.

If you are simply wanting to stick on a background film and immerse yourself in the beautiful surroundings of France, I would still say to check this film out. I cannot guarantee you will be invested in the characters or the journey that you take, but I can say that you will want to crack open a bottle of wine and imagine that you are there with them. That doesn’t sound too bad right now, all things considered.