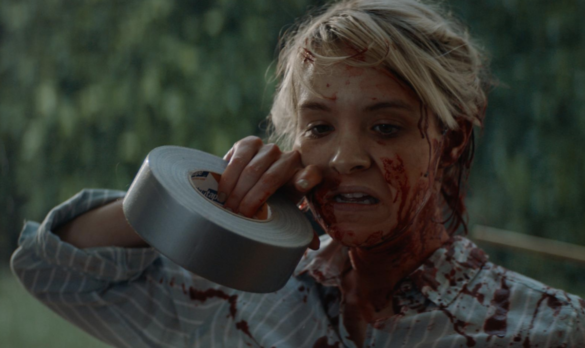 Synopsis: A suburban woman fights to be believed as she finds herself stalked by a threatening figure who returns to her house night after night. When she can’t get help from those around her, she is forced to take matters into her own hands.

A few weeks ago, Brea Grant dropped her feature debut, writing and directing the devilishly entertaining 12 Hour Shift, displaying a cool, witty head for fun female-led horrors. If there were any worries it may have been pure luck, these can be safely cast into oblivion. Her latest writing effort, a Shudder exclusive and team up with Iranian-American director Natasha Kermani, is another smash hit for the horror streaming service. These two women aren’t content with owning the game, they’re here to change the rules. Razor-sharp, bloody, and brisk, Lucky is an essential re-ownership of the final girl movie.

The film is pretty much a one-woman show in Brea Grant, who plays May, a successful self-help author whose life is on track until she wakes up one night to find a man has broken into her home. Standard home-invasion fare, and then this happens: ‘That’s the man that tries to kill us every night.’ The statement, poignantly, comes from May’s docile, gaslighting expert husband. May’s confused, but there’s no time to process. The golf clubs are out. ‘It’s time to fight for our lives,’ says her husband, barely awake, as if he’s done all of this before as if he’s playing a game as if it doesn’t matter that his wife has been repeatedly targeted. ‘It’s just the way it is,’ he goes on, slamming the point home, and showcasing Kermani’s brilliant sophomore effort as a playfully bloody criticism on how women are simply expected to get on with their lives after an assault – after all, they’re just ‘lucky to be alive.’ That last statement comes from a cop. It’s so furiously true that you’re never laughing in this film, despite how outlandish its central premise is.

No less than 10 minutes in, the themes have been introduced, the genre turned on its head and the antagonist revealed. If anything is missing, it’s the lack of tension. It’s a real shame because had Lucky been as tense as The Invisible Man, for instance, it would have catapulted this film to another level. That aside, Grant’s screenplay is a winner – sharp as a knife, superbly paced, and intelligently in tune with the fears, women face every single day.

The lack of tension is undeniably a flaw in what is otherwise a smart reimaging of the home invasion horror, but it’s easier to stomach since it’s tethered to the big idea in the script. The man that invades May’s home every single night cannot be killed. Bash his head in and the blood pools onto the floor as expected, but blink and the body disappears, like May made it all up. The concept is deceptively simple, but it blows the whole film open right from the start. This is the real world as we recognize it, but for May, a crack in the seams has appeared (cleverly shown by a broken plate in the opening minutes) – things can and do go anywhere.

The central idea of a villain that returns night after night, seemingly impervious to death and scrutiny, also works in making us a part of the gaslighting that terrorizes May throughout. It’s natural to start questioning events immediately. The first thing you’ll do is try and guess the killer – but Grant already has you beat on that, so just enjoy the ride. The film is working on its own logic, and it’s never clear how much of that is in May’s head if any at all. There’s no way we can be sure the man pursuing her is even real. Except we clearly see May put a knife in his throat and wash the blood off her face, so she’s sure, and that’s what matters. It’s a great performance from Grant, playing both psychological victim and ruthless manslayer. And with such a crisp run-time (it’s only 80 minutes), Kermani’s film crackles with energy.

Instead of using the authorities to provide answers to May, they’re used as another part of the attack, a second wave, psychological instead of physical. Every time May reports the attack, there’s no body to show for it. The man attacks, then he vanishes. May does sound crazy because her situation is insane – how on earth can she keep being attacked by a masked man that never quits, can never be found, and has traceless blood? She’s turned into a helpless victim – something May empoweringly rejects with bitter resentment. Yet still, she’s repeatedly informed that she’s the reason for what’s happening. ‘Do you know this man?’ ‘Has your husband ever hurt you? ‘Have you ever argued?’ ‘Do you sleep?’ ‘You’re lucky, you know.’

Lucky is a manifestation of the anxiety of being a woman in a world where an assault often spirals into a relentless series of victim-blaming, be it a friend, authorities, or even the paramedic treating May at the scene of the crime; in a film of guttural stab wounds, it’s the latter involving a male paramedic that provides the most chills. His casual indifference to both May’s story, her friend in critical condition, and the perpetrator’s whereabouts, reinforces a sense of bleak isolation – even as she’s being aided by the people whose job it is to actually care. In the film’s best shot, May comes around dazed, where we’re shown the paramedic leaning over her, inspecting her like a predator. He could easily be the mysterious attacker.

It’s obvious that something supernatural is afoot, but even then, the film has no interest in explanations because an explanation would render the point meaningless. The screenplay is smart and self-aware enough to never even try. The question isn’t who is this man and what does he want, it’s why do women have to go through this time and time again? There are wobbly issues regarding the ambiguity of the ending, which threatens to undermine everything due to how sudden it comes; you could hardly call it satisfying. But the film perhaps has its eyes somewhere else.

If the ending comes to a useless conclusion, it’s because that’s exactly what it is. No answer is going to help May. The damage has already been done. It makes no difference to May who the man attacking her is, only that she wants him to stop. Lucky is about the endless, exhausting cycle of a woman defending herself against an unknown assault, on her way to work, in a parking lot, outside her house, inside her bedroom – it’s a relentless, targeted invasion that nobody else ever sees. ‘You know it’s not safe in there,’ her husband patronizes her, meaning their lovely house, with all of its recently smashed windows. ‘Yeah, I do know that’ replies May. She goes in any way because what else is she going to do? That’s her home, she has a life to live.