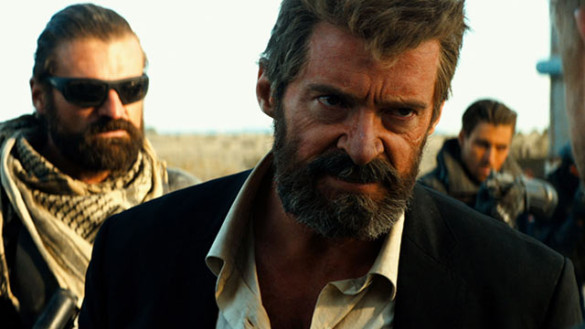 Synopsis: In the near future, a weary Logan cares for an ailing Professor X in a hide out on the Mexican border. But Logan’s attempts to hide from the world and his legacy are up-ended when a young mutant arrives, being pursued by dark forces.

Let’s just get straight to the point. Logan is battling out against other Marvel films as the greatest Marvel film ever made. In fact, it’s battling out as the greatest comic book movie ever made. Standing against the shoulders of giants like Watchmen, Captain America: The Winter Soldier, and The Dark Knight, Logan has achieved exactly what it set out to achieve. A dark, gritty, violent, emotional tale about a fictional world. Setting aside the “comic book” aspects, Logan achieves beauty through violence and despair.

An old and ever fading Logan (Hugh Jackman) is taking care of a rather ill Professor-X (Patrick Stewart). While attempting to lay low, Logan is intertwined with a young mutant whom has some eerily similar traits to him. Logan is then forced to escort this mutant to a place known only as Eden while being chased by a dark and all too familiar force. Making for a unique and interesting set up, Logan is the perfect set up to a masterpiece of a film.

What is incredible about Logan is that it almost ignores the fact that it is a comic book film. The filmmakers throw us into the world that the story takes place in, and leaves us there to discover the world for ourselves. The environment of the film is so incredibly intimate and serious that we forget we are watching a movie that involves superpowers and the acknowledgment of the supernatural. James Mangold creates a universe massively different than previous X-Men films, making it almost immediately easy to enjoy.

The other aspect that sets apart Logan from other films is the action. The action isn’t necessarily different or coming from a new angle, but it vigorously embraces the violence and gore. Logan is a bloody disgusting mess that makes you cringe and squirm with every on-screen death. If Logan is anything, it is definitely an incredible lecture on the human anatomy. Contorting and annihilating every nook and crevice of the human body, it is almost on par with some of the Saw films. Forcing you to look away at certain moments and vocally proclaim how disturbed you are, the action is over-the-top and non-stop. Among the many things that Deadpool brought us that we are thankful for, the biggest of all was the permission of an R-Rated Wolverine film.

Another thing that separates Logan from other comic book films are the performances. Jackman and Stewart have always been talented actors, so it was always disappoining when we had to watch them play these characters in the previous X-Men films, since they were mostly limited. But now, they are allowed the freedom to proclaim their range as actors in this world, making us realize how connected we actually are with these characters. As a result, we can physically feel the pain and suffering the two of them are feeling. Additionally, there are a couple different relationships we receive in Logan. One being a mentor and his protege with Professor X and Logan, and the other a father-daughter style relationship with Logan and the young mutant. Professor X has clearly not lost his faith in the world that they live in, but Logan is persistent in reminding him that it is not what they think it is.

Logan has become a cranky old man, focused solely on how quickly he can possibly end his own life while still caring for Professor X. After all, Logan does owe quite a bit to Professor X. The professor took Logan in when no one else would and gave him a family, which is the only thing Logan has ever seemed to long for. However, like all previous times, the presence of Logan only brings pain and suffering to those around him.

The young mutant, Laura, has a much different relationship with Logan. She almost refuses to speak with him for the first 3/4 of the film, and operates solely through dense facial expressions. Logan feels obligated to care for Laura and carry out on the task he has accepted but still is reluctant. He knows if he becomes attached that it can only end poorly, but Laura accepts this trait. She sticks with Logan, trusting him even. The character interaction is absolutely stellar in Logan, some of the best among a comic book film.

Logan, for better or worse, ignores its comic book roots, and stands simply as an incredible film focused on relationships. Tossing aside the cartoon, childish energy and instead channeling something that is serious, dark and violent. With incredible performances and Mangold’s sharp direction, it is without a doubt that Logan will stand the test of time. Not only among comic book films, but the history of film in general.

Movie Review (Sundance 2022): ‘FRESH’ is a Mix of Tones that Manages to Cook Up a Storm

Movie Review (Sundance 2022): ‘A Love Song’ is Short, Simple and Sweet, Almost to a Fault