Movie Review: ‘Last Flag Flying’ is a deep examination of the distress and pain that comes with desolation 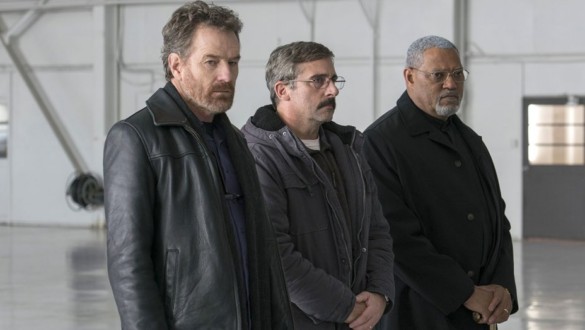 Synopsis: Thirty years after they served together in Vietnam, a former Navy Corpsman Larry “Doc” Shepherd reunites with his old buddies, former Marines Sal Nealon and Reverend Richard Mueller, to bury his son, a young Marine killed in the Iraq War.

If you’ve never experienced the hardships of losing a family member, especially a sibling or child, then Last Flag Flying will fearfully give you that unwanted state of recession. Not just for the film, but also relating to reality, having someone incredibly close to you pass away is essentially a never ending, abhorrent dream that’ll continue to engulf anyone long after their loss. What makes Last Flag Flying distant from what could’ve been a repulsive 124 minute movie of unexplored grief, it’s the deep culmination that brews when following all of the decisions that come with loss while also establishing and questioning the viewpoints of apposite real world issues.

Richard Linklater’s range of filmmaking is rather unexpected when taking into consideration the broad spectrum of genres and personal techniques that he induces in to his earlier projects. He’s obviously made a name for himself by specializing in those low-budget, feel-good films like Dazed and Confused and The Before Trilogy but can deliver projects clear out of the blue like Boyhood or Bad News Bears. Last Flag Flying falls somewhere right in the middle. Even with its adaption from the novel and time period of the early 2000s in which it takes place, it feels more significant now than it ever could have possibly been without Linklater attached. Not just solely because of him, but also because of the absolutely exceptional ensemble cast he’s equipped his film with.

This trio of actors that each hold a spot as a main character, have some of the most riveting details when they spend time reflecting on the past and future. Each actor coming from such diverse filmography but successful backgrounds make this film simply, so real. Linklater pens the development of each persona in contrast to Carell’s character. Cranston is the free spirit, whereas Fishburne is the voice of reason. It’s when the difficulty that Carell’s character occurs that Cranston and Fishburne undergo their own significant development. They’re all simultaneously building this grand emotional arc between the three characters just in different ways they can each cope with it. We know the feeling between each character is mutual, but the pure talent Linklater has from page-to-screen feels like they’re all going through different changes albeit being similar.

Before moving on, I feel obligated to bring up why Last Flag Flying, even with its near-perfect execution, suffers from a shortlist of virtually uncontrollable faults. For one, in the midst of the emotional depth being built, there’s a short patch in the aftermath of the exposition where you’re not exactly sure where the film’s heading. There’s a couple of scenes that bring this element of how the film feels like it’s just going to be a short forthcoming of our central characters, putting to rest all of the unmatched potential you can see it achieving. Eventually and thankfully, crucial events are finally set in motion to put the film on the right track. I suppose this is also just a personal nitpick, but after the final presence of the climax, I suppose you can say I just wanted a bit more of solidity of what were given from Steve Carell’s character and from everyone else in general. It’s probably something that depends on the type of audience and frankly just who’s watching it but sadly for me it felt a bit unmatched.

The lack of fulfillment from the resolution is made up in the department of character development and tone. Although mostly serious, for its own good it’s comedic at perfect moments. Not just for scenes in need of comedic relief but also in just scenes of dialogue with characters interacting with on another. There’s one scene in particular where all three laugh constantly at the stories they’re reminiscing on which only makes the audience laugh even harder. But disregarding the flawless tone and development, it’s the spectacular performances across the board that make the film thrive so well.

Even with the discrete yet small number of flaws it suffers from, Last Flag Flying is brilliant. Every category that exists within it is impeccable in terms of how it’s being portrayed. It’s definitely one of Linklater’s most solid pieces of work as of late. I think it has the chance to leave an even bigger mark over time if given the right chances and audience.